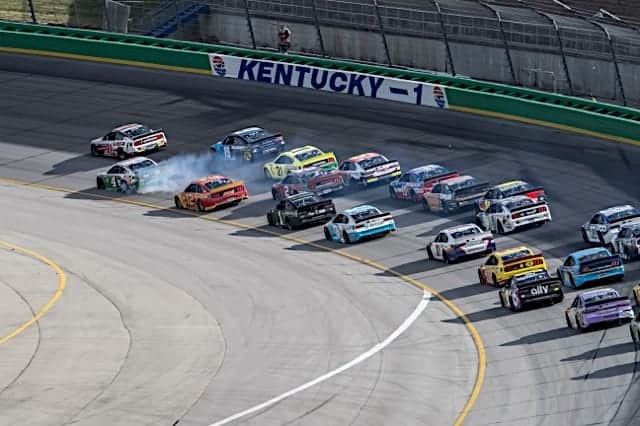 Guess what? We made it through a NASCAR Cup Series race for the first time in a month without a weather delay. Makes me happy.

However, what we ended up with was a very idiosyncratic race.

The Quaker State 400 Sponsored By Walmart will likely always be remembered for the final two laps. Cole Custer went for it to get a well-deserved victory. It’s not every day that you can say that you made a four-wide pass on the outside at the white flag to get your first win.

Here, Mike Joy and Jeff Gordon were pretty much perfect. This was a legitimately exciting final couple of laps. Afterward, FOX Sports 1 literally spent five minutes going back through everything, including the fact that Ryan Blaney nearly wrecked the field after he hit a 20-year-old bump on the apron. When the track was repaved in 2017, they didn’t fix that, so that’s the oldest bump at Kentucky Speedway at the moment. It was really bad before the repave and is worse now.

In Custer’s case, he was one of a number of drivers to benefit from lucky cautions on Sunday. He finished third in stage two by staying out long enough for a yellow to come out when Matt Kenseth’s valve stem got sheared off, resulting in a spin. He was never really in contention for much of the race, despite a really good car.

However, this was the climax to a really pedestrian race. On Monday, Bryan Gable wrote about how the finish could affect how this race will be perceived in the future.

My goal here is not to rehash Bryan’s column; you can simply read his column to get that. Here, I have to use that as an establishing notion. By that, I mean that it’s a known fact. This wasn’t the greatest race on earth. We have to take that knowledge and critique the broadcast based on that since FOX Sports can’t do much about the on-track product.

Pre-race wise, there really wasn’t all that much about which to write home. One of the big stories before the race was Jimmie Johnson returning to the car after missing Indianapolis Motor Speedway, so that got a lot of time. There was also a piece where Kurt and Ashley Busch compared and contrasted racing with polo (since Ashley’s a professional polo player). If you’re looking for pre-race driver interviews, you might be better served by watching the pre-race show on NASCAR’s YouTube channel that Alex Weaver hosts. You’re more likely to hear from them there given the distancing requirements.

Early on, there was at least some racing for position. Aric Almirola was able to move to the front fairly quickly and snatched the lead on lap 10. Then, no one passed him for nearly 200 miles. It’s the most laps that Almirola has ever led in a Cup race (128).

Given that there was literally no racing at the very front of the field until after the halfway point once Almirola took the lead, FS1 would need to supplement its broadcast with coverage of action throughout the field and additional stories. It’s hard to get additional stories with the very limited staff that can be in the infield at these races, so the on-track product has to make up the deficit.

Did it? Not much. There was some decent racing from time to time, but otherwise, there was not all much that going on. Compared to the rest of the weekend, this race was really clean.

With the PJ1 TrackBite in play, tire wear had been ridiculous all weekend. Sunday was not so bad, but a number of contenders, including Almirola, did have issues. Almirola lost his lead on lap 138 to Blaney because he had just slightly corded his left-front tire. This is something that we saw on the broadcast. Compared to what we saw during the Xfinity Series races on Thursday and Friday nights, this wasn’t so bad. Given the fact that the track got soaked down Saturday night, I’m surprised that it wasn’t more of a problem.

That said, Johnson was forced to pit early on lap 208 due to what was described as a vibration, and we never really got much of a follow-up to that. A vibration on a NASCAR Cup car can be many different things. It could be a tire unraveling. It could be a loose wheel. I don’t know.

Luckily, given the dearth of cautions in the first two stages for cause (there was only one of those in the first 228 laps), the vibration didn’t hurt Johnson much. It was the spin off of the nose of Brad Keselowski that ruined his day.

It was pretty definitive what happened here. The discussion of the loops in order to set the field revealed why NASCAR waited as long as it did to throw the yellow. Earlier in the weekend, there was a little piece that aired showing the eight scoring loops that are located at Kentucky. The first one after the start-finish line is in turn 1. They had to get at least there before throwing it.

As for Johnson, he ended up 18th while Keselowski finished ninth. We didn’t hear from Johnson after the race, but he wasn’t exactly pleased. He tweeted this afterward.

I thought today was our day, @DanielsCliff & the @allyracing boys brought me a great car. ?. I do look forward to my next restart behind @keselowski though.

As noted above, post-race coverage was mostly about the last two laps. In between that, viewers got interviews with the top four finishers (Custer, Martin Truex Jr., Matt DiBenedetto and Kevin Harvick) and some post-race analysis before leaving Kentucky.

FS1 didn’t really do that great of a job keeping me entertained with the race Sunday. However, that’s not its fault. FS1 cannot determine the kind of action that you’re going to see in a 400-mile race; it has to do the best with what it’s given. With what it was given, FS1 did OK. I would have preferred being more inclusive, especially when the race got into a lull.

That’s all for this weekend. This is another really busy week of racing. Wednesday night brings the All-Star Race festivities at Bristol Motor Speedway. Still think the neon stuff is completely pointless. There are less gaudy ways to do stuff like what they’re doing. Probably couldn’t even see it very well with the lights, but I’ve never been to Bristol, so I can’t say that for sure.

Once that’s done, it’s another busy weekend of action. Assuming that nothing changes, all of NASCAR’s national series will be at Texas Motor Speedway this weekend. Saturday is supposed to be a doubleheader with the NXS in the afternoon and the Gander RV & Outdoors Truck Series at night, while the Cup Series races 500 miles on Sunday afternoon. However, COVID-19 is currently spreading quickly in Texas and might affect the weekend. The only guarantee right now is that it’s going to be really hot and humid there. A quick check of the forecast sees highs of 97 and 98 degrees with lows in the upper 70s. That is not comfortable.

INDYCAR has a doubleheader of its own at Iowa Speedway. They’ll be joined by the ARCA Menards Series. IMSA’s season continues with a replacement race weekend at Sebring. The IMSA WeatherTech SportsCar Championship will be joined by Michelin Pilot Challenge and Prototype Challenge. Finally, Formula 1 will travel to Hungary for its annual visit to the Hungaroring.

The All-Star festivities will be covered in Thursday’s edition of The Critic’s Annex in the Frontstretch newsletter. A special Wednesday edition of the Annex will cover the shortened Truck race from Saturday night and the ALSCO 300 from Friday. Next week’s edition of Couch Potato Tuesday here on Frontstretch should cover Sunday’s O’Reilly Auto Parts 500 from Texas (assuming nothing changes) and the NXS race. If anything substantial changes schedule-wise between now and then, there’s enough on the schedule that I’ll be able to compensate.

Also, before I go, NBCUniversal’s Peacock service launches to non-Comcast Xfinity customers on Wednesday. Tuesday is the last day to pre-order a year of access to Peacock Premium for a discount. It’s normally $49.99 a year for the ad-supported version or $99.99 for the version without ads. With the discount, it’s $29.99 for the first year of the ad-supported version and $79.99 for the version without ads. Racing-wise, Dale Earnhardt Jr. has created a show for Peacock entitled Lost Speedways which will premiere Wednesday. There will likely be more racing content on there going down the line.

I still thought the race was (YAWN!) boring. I am truly interested in what Tony Stewart and Ray Evenham have cooked up for next Summer, though, check this out: https://www.foxnews.com/auto/tony-stewart-launching-new-oval-racing-series

idiosyncratic IS A WORD YOU DON’T SEE OFTEN.

UNTIL THE LAST 2 LAPS SUNDAY, THE BEST RACING OF THE WEEKEND WAS WATCHING KYLE LARSON WIN TWICE ON THE DIRT TRACK CIRCUITS !!

Phil, you do a great critique.
I got to see my favorite part of the race, a story and pic of a driver’s (Harvick) wife and child. Sarcasm Steve.
Why do they get attention and not a current low budget team who shows up every week at the racetrack?
The race is what it is. Like great entertainment, always finish on a high note and NASCAR has been doing that.