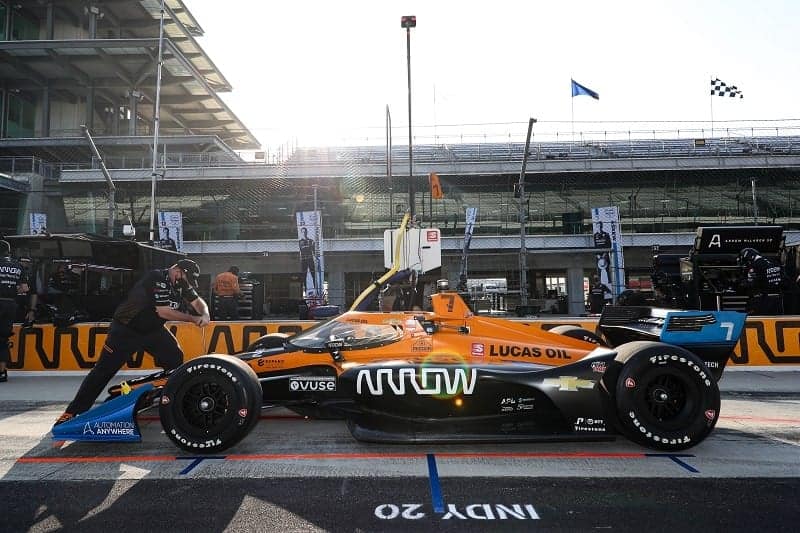 While one NTT IndyCar Series driver was clearly ahead of the field in Saturday (July 4)’s 2020 GMR Grand Prix, others had a far more difficult time. In the first edition of Backmarker Blues, we take a look back at which IndyCar drivers had the biggest obstacles to overcome in the 80-lap race at Indianapolis Motor Speedway—and how they can get better to avoid such massive pitfalls in the future.

2020 hasn’t been kind to Alexander Rossi, and the GMR Grand Prix was more of the same. At Indianapolis Motor Speedway, Rossi came into the pit lane after the 41 laps, complaining of an electronics problem that saw him lose power. He then stalled in pit lane with a fuel pressure problem, forcing him to retire. That’s after the electronics issue that ruined his day at last month’s 2020 Genesys 300.

It’s certainly not a promising start for Rossi, who has the skills to win the IndyCar championship but has struggled with mechanical problems throughout his career. He needed to score a solid finish at IMS in order to keep himself in contention for 2020, but now he sits in 20th place in the overall championship standings—lower than he’s ever been in any championship after the first two races since his GP2 run in 2014.

Luckily, Rossi’s solution going forward is simple: Andretti just needs to give him a car that works.

She’d like a chance at things. Maybe next weekend. pic.twitter.com/CSLWCcWzYw

After a promising race at Texas Motor Speedway and a top-six qualifying position to start at the IMS road course, Arrow McLaren SP rookie Oliver Askew became the only driver to crash out of the GMR Grand Prix. He lost control on turn 14 after coming in just a little too hot and made contact with the wall only 34 laps into the race.

The year is still young, and Askew has noted that he’s taken time to reflect on the cause of the accident. But in a shortened season, every race counts, and Askew’s rough Grand Prix isn’t going to help his chances for Rookie of the Year. He’s got the right approach in making sure that he learns from his mistakes, but ultimately his improvement will come with experience, which just takes time. He could find his stride in 2020, or might not come fully around until 2021.

Had some time to reflect on yesterday’s accident, I think there are more positives to take from the weekend as long as I learn from that and come back stronger. Proud of our team for their hard work. Looking forward to more opportunities in the coming weeks! @ArrowMcLarenSP pic.twitter.com/JxRoomHmeg

The No. 18 Dale Coyne Racing Crew

While Santino Ferrucci finished ninth in the GMR Grand Prix, for the second race in a row, the No. 18 Dale Coyne Racing team struggled with his pit stops. During his first pit stop at the IMS road course, Ferrucci lost a wheel nut and returned slowly to the track. And while that took place early enough in the race that he was able to come back for a take a solid finish, it certainly isn’t confidence-inspiring. Ferrucci certainly has to wonder what could have been if he’d had a better time in the pits.

To put their driver in contention for race wins, the No. 18 crew has a lot of work to do. Ferrucci can’t be losing coveted positions—and chances at podiums or even victories—because of their missteps.

Open wheel racing, F1 and Indy Car, both suffer from a chronic case of the Haves and Have Nots. Tough to get too excited about the non competitive racing with the winner predetermined. And the field fillers as well.