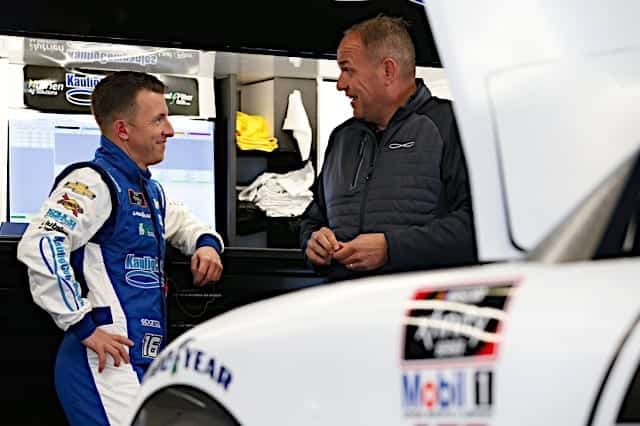 Flashback to less than two years ago: AJ Allmendinger was running in the NASCAR Cup Series for JTG Daugherty Racing, finishing 22nd in the championship standings.

That was a disappointing ending to his tenure at JTG.

Ultimately, Allmendinger believes expectations were set too high, given the equipment he had to work with. His inconsistency at JTG led to the hiring of Ryan Preece, who replaced him in the No. 47 Chevrolet.

“It’s a grind,” Allmendinger recently told Frontstretch. “It’s hard when you’re running right around the mid-20s every weekend, so just that factor when you’re as competitive as I am and I don’t do a good job of getting home and just letting it go and getting right to the next week, it just burns me down a little bit. That was tough.”

Allmendinger says it wasn’t from a lack of effort from his team, though. In fact, he looked in the mirror and said, “God, I’ve just got to figure out how to get better.”

Because he wasn’t running full-time at the Cup level in 2019, Allmendinger’s schedule was wide open. He landed a television gig at NBC Sports to be a motorsports analyst. He also landed a part-time ride with Kaulig Racing in the NASCAR Xfinity Series, seeing instant success.

In his first outing last July at Daytona International Speedway, he crossed the finish line in second. Following the race, then driving the No. 10 car, he failed post-race inspection, resulting in a 38th-place finish. The same thing happened in his second race at Watkins Glen International, when he took the checkered flag second behind Austin Cindric only to be disqualified. In his other three races, he finished third at Mid-Ohio Sports Car Course, led 10 laps at Road America only to get spun out on a late-race restart and won on the Charlotte Motor Speedway ROVAL. Overall, those are some solid numbers.

But why was Allmendinger – a longtime NASCAR veteran – attracted to an up-and-coming team like Kaulig?

“I noticed every year they continuously got more competitive,” Allmendinger said of Kaulig. “That’s all you can really ask for in a brand new team that’s coming into a sport. We live in a world right now of, you want everything immediately. You want everything to happen quick, you want success right away. Most of the time, that’s just unrealistic.

“Just looking at that race team and how they kept improving every year and talking to Chris Rice [president of Kaulig Racing] and just being open and honest with each other. I said, ‘Man, I’m at a point in my life that I really don’t know what I want. Over the last couple of years, racing hasn’t been a lot of fun. There’s been a lot of pressure on my shoulders and at some points has been unrealistic of where we should be running.’ I told him, ‘I want to have some fun. I want to go out there and contribute to the race team, try to make it better.’ That’s what [Rice] wanted.”

Allmendinger said there was no outside pressure of going out and winning races, especially at road courses, where he’s known for running towards the front because of his racing background. Instead, he was there to make the team better because Kaulig didn’t have stellar numbers on such racetracks.

An example Allmendinger is reminded of towards helping the team was at Mid-Ohio last season. Unloading off the truck, his No. 10 car was “terrible.” According to the driver, Rice could tell something was amiss based off Allmendinger’s expressions, leading to a conversation that revealed what his role was with the team.

“[Rice] said, ‘Hey, unless a miracle happens today, we’re not winning. When we don’t win, it’s not because of you. We have to get better and that’s why you’re here. You’re here to make us better,’” Allmendinger recalls. “It was like this weight that was on my shoulder was lifted. It was like, ‘OK, just go do my best.’ We probably had an eighth-place car, we finished third.”

Because Allmendinger isn’t running for points, he’s able to be a test car, per se, with one goal in mind: elevating Kaulig.

“AJ isn’t racing for points for us, so he’s more concerned about making our cars faster and what to do to make the cars better,” Rice said. “That experience allows us to really focus on making the cars better.

“AJ is a great teammate. He tells us what he feels, and we believe in what he says. We try to fix it. If we don’t fix it, he lets us know, and he’s not scared to tell you what he’s thinking. He’s very honest with us. He doesn’t care if he hurts your feelings in the process.”

Honest, indeed. Allmendinger confesses he isn’t shy to voice his opinion with the team, but that it ultimately makes everyone around better.

“This team is special because everybody is working with the same goal,” Allmendinger stated. “We can be hard on each other. He’s hard on me, I’m hard on them. I’m trying to improve, but if we all have the same goal and we know that there is no finger pointing, it makes it so much easier.”

Entering the 2020 season, Allmendinger had eight races lined up on his schedule: the three superspeedway races and five road courses. That changed when the No. 16 failed to qualify for the season opener at Daytona. Because of that and the current climate with COVID-19 lingering, Matt Kaulig, team owner of Kaulig Racing, asked the driver which races he’d like to do to makeup for Daytona. The team agreed on Bristol Motor Speedway (finished 10th) and Atlanta Motor Speedway (his first oval win). The victory qualified Allmendinger into the Dash 4 Cash race at Homestead-Miami Speedway the following week, at which he won the $100,000 bonus.

But even when Allmendinger isn’t at the track, he’s not afraid to shoot the team a message, expressing his thoughts, hoping to better the team.

Allmendinger added: “We’re in it together and [I] just do the best that I can and lead us in a good direction when I’m in the racecars or heck, this year, even when I’m watching on TV, I’m texting Chris Rice constantly: ‘This is what I see.’ It’s always trying to help.”

While Allmendinger is running a partial schedule, his teammates Justin Haley and Ross Chastain lean on him for his veteran leadership. Thus far, that’s gone well in 2020 – the first season Kaulig has put two full-time efforts on the racetrack, as Chastain sits third in the points standings while Haley is sixth.

The relationship with the full-timers is a unique one as Allmendinger, 38, jokingly calls Haley his son, while Haley calls Allmendinger his father.

Haley admits he’s felt the impact from having the veteran driver giving him advice both on and off the track.

“I think he can relate to me a lot and I can relate to him,” Haley said. “[…] He hasn’t only helped me on the racetrack, but he’s helped me become a better person, a better racecar driver. AJ’s been great. He’s helped our program so much, especially at the road courses. He brings in a different view.”

At the same time, Allmendinger is very complimentary of Haley, noting he upped Kaulig’s potential since he joined the team full-time last season.

Because he’s running a partial season, Allmendinger, in return, leans on Haley and Chastain because they are running the full season.

“I enjoy being their teammate,” Allmendinger said. “They help me out a lot, definitely when I show up to these racetracks and I have a lot of questions, they have all the answers for me. I like where Kaulig Racing is at with those two, and I really think they both have a great shot this year of getting both those cars in the final four and having a shot at the championship.”

Chastain takes in all the feedback he gets from Allmendinger, as he’s been around NASCAR for the past 15 years.

“With his vast experience from all the years he’s been racing, he’s forgotten more about racing than I ever learned,” Chastain said. “He genuinely wants to help Justin and I, so that makes going to him for advice easier.”

Allmendinger concurs that since he joined Kaulig last season racing has become fun again. He believes it starts from the top down, with Kaulig and Rice both having positive mindsets, filled with energy. In theory, it’s a trickle-down effect on the team.

In fact, Allmendinger is having so much fun that he’s not ruling out of a full-time season with the team, should that opportunity come up down the road.

“The way I put it is, if Matt Kaulig gave me that opportunity and said, ‘Hey, do you want to run full-time, let’s do it,’ I wouldn’t immediately say no,” Allmendinger said. “I would definitely have to think about it.

Whether that happens will be determined in the future. For now, Allmendinger is going to continue to go “trophy hunting,” as the series will run on the Indianapolis Motor Speedway road course for the first time this weekend.

So happy to see AJ back in a car, even if it’s not Cup. Always thought he was under-rated as a driver. Love his personality as a broadcaster too. He brings a lot of fun an enthusiasm to the sport. I root for him every chance I get!