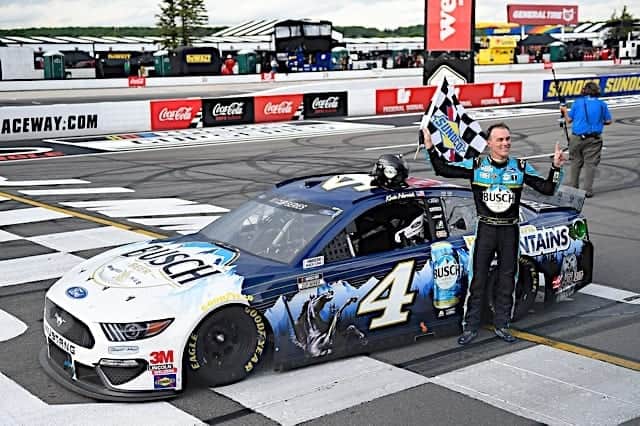 You better be talking about strategy because it was the key element of the Pocono Organics 325 and propelled Kevin Harvick and company into victory lane. While it took him nearly 40 races, the triumph marked the first time in his almost two-decade career as a Cup Series driver that Harvick claimed a win at Pocono Raceway. In doing so, Harvick became just the second driver to earn three-win stickers this season. While some are struggling with no practice or qualifying, the Harvick team continues to roll on green racetracks.

But, you might as well talk about his fellow Stewart Haas Racing driver Aric Almirola just as much. The polesitter turned quite a few heads with a dominating performance throughout the day. Although he admitted he has struggled on the triangular track in the past, Almirola led a race-high 61 laps and won Stage 2. It looked as if Almirola would pull away from the field, but a late pit call for two tires by Harvick’s team stymied Almirola’s potential first win on a non-superspeedway circuit. He finished third.

Fuel strategy came into play as soon as the green flag dropped and was propagated throughout the field the entire day. Michael McDowell, driving that same entry that pulled off an incredible upset win at Pocono via strategy in 2016, was in a position to do it again in the waning moments while in the lead, but his rapidly depleting fuel tank forced the No. 34 entry onto pit road with under 20 laps to go. Yet, with just a splash of gas, McDowell zoomed back onto the track and rallied to an 8th place finish. It was a great points day for McDowell and crew, as well as for Christopher Bell (4th), Chris Buescher (10th), and Matt Kenseth (11th), all of whom sit well back in the standings.

For the umpteenth time in 2020, mother nature dealt a bad hand to NASCAR once again. So far, it has been a scavenger hunt gone wrong to find the sun at many of NASCAR’s tracks. While many race teams might be considering building boats or other watercraft at this point, the race eventually got underway after a delay and many misty pace laps.

With rain crashing NASCAR’s party once again, it has become almost laughable. For Clint Bowyer and spotter Brett Griffin, you might as well joke about it.

All-time active Pocono wins leader Denny Hamlin would have extended his own record if it were not for a few pesky lap cars and an unnerving vibration. While he wasn’t in the picture for most of the day, Hamlin found himself in the right place at the right time as he looked to be steadily closing in on leader Harvick as the final laps rapidly ticked by. But, when he radioed to his pit box that the No. 11 had a very concerning and worsening vibration, Hamlin had to walk a very narrow tight rope with slower traffic and a fragile car. As he continued to valiantly challenge Harvick for the win, he fell short as the runner up, finishing 0.761 seconds behind the No. 4.

The first half of Jimmie Johnson‘s final race weekend at Pocono as a full-time driver proved to be long and arduous. The No. 48 Chevrolet missed the setup and lacked speed throughout the 130 laps contested. While crew chief Cliff Daniels never gave up with adjustments and strategy calls, Johnson could not find the pace of the leaders. To make matters worse, Johnson’s 21st place effort was the final sting in his day as it was just one position out of the top 20 field invert, which could have put the veteran on the pole for tomorrow’s contest. But all is not lost, with 130 laps of knowledge behind, there are still 140 remaining this weekend.

The 2019 NASCAR Cup Series champion Kyle Busch‘s quest for a win in 2020 will have to wait for another… day. Still griping over his team’s struggles and a lack of practice, the No. 18 machine looked fast early with a slick brand new paint scheme. He maintained a spot in the top 10 throughout the contest and ultimately came home fifth. However, coming into the day, Busch had won three out of the last five Pocono races and this sixth one in that stretch did not emulate his recent performances. But, with a race-long practice session under his belt, there is always tomorrow… literally.

It was lap 94 and just 36 laps remained when leader Almirola cautiously entered pit road for what was expected to be a routine round of green-flag stops. Crew chief Michael Bugarewicz made the call for four fresh Goodyear tires and a healthy dose of race fuel. With a good clean stop, the Almirola team thought it would be their race to win, cementing their well-deserved footprint on a dominant day.

But, it did not happen.

Harvick was not having a normal Kevin Harvick-like afternoon in the first two stages. But when the restart unfolded to begin Stage 3, Harvick popped up to second and was quietly tracking the No. 10 machine, his teammate Almirola. When Almirola hit pit road, Harvick was right behind him, nearly running into the back of his fellow SHR Ford, compensating for Almirola’s conservative pit entry. Crew chief Rodney Childress won Harvick the race when the call was made to take just two tires which ultimately moved Harvick into the race-winning track position in the long run to the checkers.

Why… should you be paying attention on Sunday?

If you are a fan of the highly pressured folks who make the tough calls on top of the pit boxes, the second half of Pocono’s doubleheader will likely be a treat. If the Saturday contest was any indication, pit strategy will vary egregiously throughout the grid. Comers and goers were aplenty with the ever-evolving pit cycles. Since all teams will run the same car with the same rules and same time of day, the upcoming race will certainly produce similar action.

In addition, one thing to keep an eye one is cautions. During Saturday’s contest, no caution directly impacted the multiple green flag fuel and tire strategies. A well-timed caution could positively or negatively affect the strategy calls of every driver, potentially inciting mass drama in the outcome of the event.

How will backup cars affect doubleheaders?

Because NASCAR has barred teams from unloading two separate vehicles for the two separate events this weekend, Erik Jones will become a target of observation. Since Jones wrecked his Toyota in the Saturday contest, the Joe Gibbs Racing team has forced to bring out a backup car since the original car will be heading to the scrap pile.

While Jones will be forced to start in the back due to the new car, will a car with less mileage and no track time affect performance? While that remains to be seen, one thing is for certain: some crews will have a very long night.

Like Jones, StarCom Racing’s Quin Houff also crashed during the first round of the doubleheader. With limited resources and a tighter budget, the StarCom group elected to repair a significantly damaged Chevrolet. There will be some eye bags in the garage area for sure.

Hey gang. Photos from the track The @StarcomRacing crew will go to our back up @ManenTail car tomorrow. A long night ahead for my boys. The engine, trans, gear amoung other items will need to be swapped. Our back up was slated for Indy next week so our game plan will change daily pic.twitter.com/Gbeh90jMku