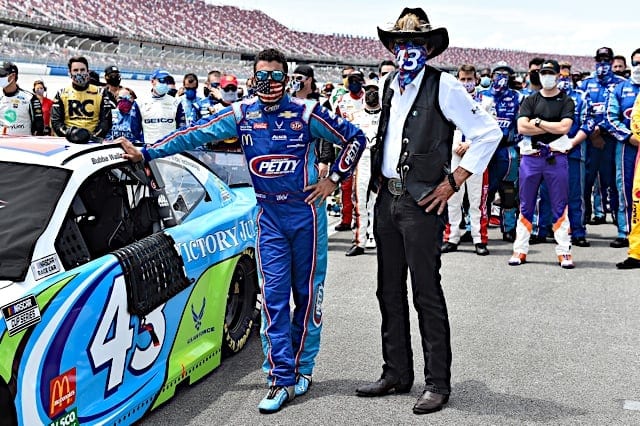 In 1960, C.Vann Woodward, the esteemed Southern scholar, remarked, “It would take a blind sentimentalist to mourn their passing.” The passing Woodward addresses has to do with all manner of Southern customs, from the statues that dot the region to the lynching bee. Yes, that’s right, there used to be something called a lynching bee in the South.

The lynching bee celebrated and normalized the murder of black men in the South.

The placing of a noose in Darrell “Bubba” Wallace’s garage is a direct descendant of the despicable and horrific act of violence that continues to traumatize the black community.

The Confederate flag had, in many ways, held the placemarker of a noose, conscripted by the South as part of the Lost Cause rhetoric that sought to lessen the impact of losing a war that they had started.

The sport of NASCAR brought the flag into its history early on.

According to some accounts, the Confederate flag once was as integral to the NASCAR landscape as the green, yellow and checkered flags that govern a race.[i]  This statement is curious but not out of the realm of possibility.

One assertion that stands out is that “Darlington was NASCAR’s only track to use a Confederate Flag, instead of a green flag, to start its races.”[ii]  This implementation is an astonishing early use of the flag as a cultural marker and supports the notion of the flag becoming a mid-century pop symbol, while also serving symbol of a war to keep the chattel system of labor intact.

The Darlington track enjoyed company with others, with one example being Atlanta International Raceway’s introduction of the Dixie 500 in 1960, where the flag was a de facto logo.[iii]

These practices, after the civil rights efforts of the 1950s and ’60s, may have changed in some ways, but the fans of the sport carried this troubling legacy forward with their continued commitment to the flag.

While the flag enjoyed its continued prominence in the U.S. and abroad through the latter half of the 20th century, the reckoning it has faced recently is one that many people have tried their best not to recognize.

The flag is a symbol that people have continued to assert is a recognition of their heritage, but there are many ways to celebrate such a thing.

Using a symbol of oppression as a celebration really acts as a reminder of anger and violence. Using a noose to make a statement is something different.

If the flag has been tolerated racism, then the noose is the clear sign of violence.

For Wallace to have to endure the horrible discovery of that item is another indication that black people face daily.

The pervasive desire to see black persons as targets is something that W.J. Cash discusses in The Mind of the South. Cash recognized that a society that openly allowed the killing of one group of people had turned many white people into hunters and killers, seeing black people as prey and barely more than an animal.[iv]

The person who found the noose did not just stumble on to a sad and pathetic item, the person ran right into a lasting tribute of the racism that is foundational in this country. The practice of racism is one that is again being examined, just as the Civil Rights Movement of the 1950s and 1960s brought the issue to the front.

The noose shows how little has changed, and it is change that is feared.

The Civil Rights Movement, and now Black Lives Matters, voice a desire for change. That the system that works for so many in the U.S. does not work for them.

From a psychological perspective, the reaction that the South embraces is one in response to the threat of mortality.

While the salience of mortality reasons that people are aware of their death, and that it influences the choices they make both through a personal lens and cultural ones, the threat of mortality is a stance that ignores this behavior.

Instead, the goal is to protect and preserve in an attempt to stave off any chance of demise.[v]  Hence, the flag and the noose are reflections of fear, that something will be lost, that any gains made by black persons comes at the cost of whatever position they have.

Such thinking ignores the idea of coexistence.

This cultural entrenchment is an illustration of the obstinate ideology that harbors a fear of change, that fears the loss of power; that recognizing something may be offensive to a group of people means that they have to look inward and give something of themselves.

Ida B. Wells reminds us that it is important that we search for meaning in historical treasures and that we articulate that the noose, a sign of white supremacy and terror, should not be viewed lightly by any American committed to justice.[vi]

The flag is of this very same ilk. Racism is not just an idea that is to be thought about or discussed, it is built into the fabric of the country.

With NASCAR’s roots in the South, the show of racism is more open, with the flag and now the noose, and it is unsettling. This race weekend offers the opportunity to confront the racism that surrounds the sport in one area.

It is an opportunity for change.

And for as far as everyone might go at the moment, there will still be miles to go. Racism isn’t limited to the South.

As horrified as I am by this gesture, I can’t say I’m surprised. One can only hope that they find who did this and take appropriate action. Bravo to the drivers and teams who stood behind Bubbal…and to The King for being there to show his support.

The “noose” was a garage door pull. Effn idiots.

Thanks for the link, very informative!

Thanks Mike. Everybody should read that link. Anybody think NASCAR will admit it?

Man, I have a hard time believing that THAT is the “noose”. I wouldn’t think anyone was stupid enough to consider that a noose, or be dumb enough to report it as such and have anyone take them seriously. Now that the FBI is involved I believe we will know the truth one way or another. I think they are past the point where they can just sweep it under the rug. Or is my faith misplaced?

Yes I believe they’re that stupid. Besides to the hammer everything looks like a nail.

Yes I think it’ll be swept u see the rug.

You want to go with that.

As i stated in my comment on the other longer thread, the circumstances around this event are very suspicious. Although I’m not sure the excellent explanation of what the rope actually was really speaks to the motivation behind cutting it down and leaving it to be found elsewhere. I hope that comes to light, but I sincerely doubt it will.

If it was a hoax it will come out from a reputable source before long. Real conspiracies are hard to cover up these days. CYA’s take a long time to die though.

Ava, now that the FBI has confirmed that this was not a “noose” left for Bubba, it would be really nice if you wrote a follow up article that is more reflective of the actual situation.

No, NASCAR is not the spiritual descendant of the “Lynching Bee” and NASCAR in the south is not openly displaying murderous racism as you not so subtly imply. In your follow up article, you might also explain why you are so quick to point the finger of racism before an investigation can even begin?

After being acquitted, Raymond Donovan asked, “Which office do I go to get my reputation back?” Now, NASCAR, racing fans, and many southerners may be wondering the same thing. This is what happens when journalists and spectators jump to conclusions based entirely on stereotypes and prejudice, rather than facts and evidence.

Frontstretch, you may also feel free to explain why you, as a journalistic enterprise, chose to stoke flames of perceived racism rather than asking questions and waiting for answers before reaching conclusions. The piece of rope in question may not have been a racist symbol in this case, but there were plenty of prejudices revealed nonetheless.