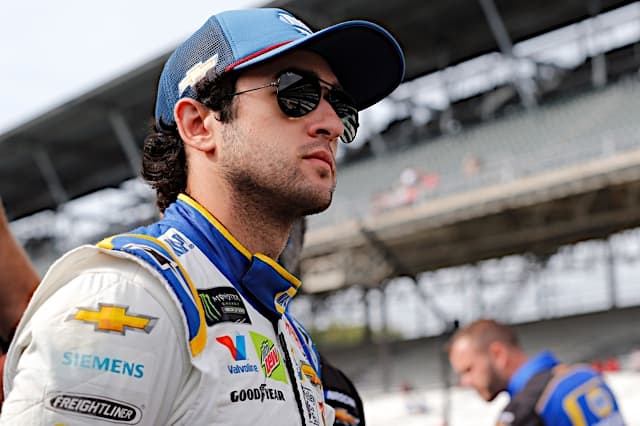 Talladega Superspeedway will be the site of the 13th race of the NASCAR Cup Series season, and will mark the half-way mark of the 2020 regular season at its conclusion.

It’s very hard to choose a team for daily fantasy in super speedway races. While there are good and bad “plate” drivers, the reality is that there is just too much taken out of an individual driver’s hands. That being said, with how equal the equipment becomes due to the draft, there’s a number of drivers that could generate a lot of fantasy points if they can survive until the end.

I didn’t name him, but one driver to take a look at, as an example, is Brendan Gaughan. Not to disrespect Gaughan, but he’d be a fairly bad fantasy pick at many different racetracks, in large part due to how small Beard Motorsports is. At Daytona International Speedway or Talladega, however, the veteran journeyman has shown speed in recent years. For example, Gaughan finished eighth at last year’s spring race at Talladega, generating more fantasy points than eventual champion Kyle Busch that week at half or a quarter of the price.

Also, with only 0.1 points awarded for each lap led by a driver, the need for a dominator is less important when building a winning lineup. The 188-lap race will have a total of 18.8 points up for grabs in this category. Take note when building your roster and focus on mid-pack competitors who can climb up toward the front on race day.

Elliott doesn’t have as much experience at Talladega as the rest of my team. But what he lacks in that field, he makes up for in performance. Elliott is the defending spring race winner, and he’s always been a major factor in the race if he doesn’t wreck or have problems before the finish.

After a slow start to the season, Elliott is on pace for his best season on record. Elliott’s average finish of 11.3 would be the best of his career, and that’s after having finished 38th at Darlington Raceway last month. Had Elliott not been spun out by Busch to bring out the final caution and instead finished top five, Elliott would be the clear-cut points leader for the first time in his career.

The defending Daytona 500 champion for less than $13,000? That should be an automatic grab, especially considering Hamlin himself is the best super speedway driver in a Toyota.

Hamlin hasn’t been as successful at Talladega as he has been at Daytona. But to his credit, Hamlin does have that win to his credit, and a third at last year’s fall race. The Virginian is definitely going to have a hand in the finish if he can make it to the end.

Talladega was the site of Keselowski’s very first Cup win, driving a lightly regarded car owned by James Finch back in 2009. Ever since that big breakout win, the 2012 champion has since returned to win four more Cup races in Alabama.

Keselowski has evolved into one of the best super speedway drivers in the series over the past decade. Ford in general and Roush-Yates Engines in particular have been spectacular over the last several years, and Keselowski is the best super speedway racer of the entire Ford fleet. While Ryan Blaney would also be a good choice based off of his recent success at Daytona and Talladega, I’m going with Keselowski due to having the experience to adapt to the new rule changes.

While Newman winning may be a huge surprise considering what happened in February at Daytona and that he’s never won at Talladega before, it actually wouldn’t be that surprising after taking a step back.

Roush Fenway Racing has a very good super speedway program, with Ricky Stenhouse Jr. collecting the only wins for the organization in the last five years at the discipline. Newman himself is also a very consistent super speedway driver; Newman only has one win at Daytona or Talladega, but he also is riding a streak of four straight top ten finishes at those two racetracks. Newman also came in second in the fall race at Talladega last season.

Obviously there’s not much to Hill’s resume in the Cup Series at Talladega, but Hill is on my team based off of how well his Speedweeks went earlier this year..

Hill raced his way into his first Daytona 500 in the Duels, then battled back in the NASCAR Xfinity Series race after losing his crew chief at the start of the day due to an inspection issue. Hill was fairly competitive in the Daytona 500 itself before being involved in a late-race accident. With how much momentum Hill has at this style of racetrack, he could be a huge value to a fantasy team this weekend.

Kyle Larson won the Outlaws race today. That’s right in a row for him.