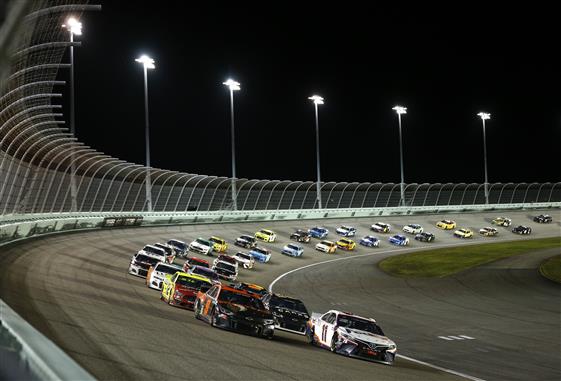 Denny Hamlin might not have won the top starting spot by virtue of speed but he certainly had plenty of speed to stay there. With crew chief Chris Gabehart back in action after a four-race suspension for a weight violation, Hamlin dominated the race, leading 137 of 267 laps en route to a convincing victory.

It’s the 40th win of Hamlin’s career, which puts the Virginia native in a tie with Mark Martin for 19th on the all-time win list. Only one thing is missing for Hamlin: a title. Martin never won one either, and only Junior Johnson has more Cup wins without a championship, though Johnson never ran a full season.  Is 2020 Hamlin’s year?

It was a career night for rookie Christopher Bell, who scored his best Cup finish to date in eighth, but he was bested in the rookie department again by red-hot Tyler Reddick. And this time, Reddick brought his teammate with him, as Austin Dillon, who became a father this weekend to newborn son Ace, finished seventh. It’s the first time in two years that Richard Childress Racing has had two cars finish in the top 10. If anything, that highlights the disadvantage in equipment that Reddick has faced, but as he overcomes that, he may just elevate the organization as well.

Actually, this week’s came before the race. No doubt that this will be, in some ways, the year of Jimmie Johnson because as the seven-time champion retires at season’s end, and there will be plenty of tracks paying tribute along the way as he makes his last visit to each. Last week, Atlanta named a grandstand for him, and this week, Homestead got involved this weekend by naming one of its infield tunnels for Johnson.

Not satisfied with simply calling it the Jimmie Johnson Tunnel or similar, it’s officially Jimmie Johnson’s Southernmost Tunnel. Which, technically is true. No track has a tunnel further south to name after him or anyone else. But the name is, of course, ripe for jokes. So many jokes.  Jokes for days.

Let’s just hope the track keeps Jimmie Johnson’s Southernmost tunnel nice and clean. Can’t have it getting filled with detritus.

Active Homestead win leader Kyle Busch entered the race tied for that distinction with Hamlin, with a pair of wins each. But while Hamlin dominated, Busch was solid. He ran inside the top 10 most of the race, but that was about it.  He didn’t mount a challenge for the win, and came home sixth, still winless in 2020.

Martinsville winner Martin Truex Jr. didn’t have the same mojo he had Wednesday night. Like Busch, he wasn’t a threat to win, but he ran outside the top 10 for most of the last 100 laps and finished 12th. Consistency isn’t usually an issue for Truex, but he’s been a bit wishy-washy this year so far.

To say Mother Nature has not been kind this year is an understatement.  Rain delays and postponements have been commonplace, and Sunday was no exception; delays totaling over two hours pushed back the start and most of the race. Luckily, lightning, not rain, was the culprit, and the race was able to get underway as soon as lightning had been out of the immediate area for the prescribed 30 minutes, and eventually, it stayed away, allowing the race to play out.

The day-night transition wasn’t expected, and while some teams probably didn’t appreciate it others benefitted, and didn’t affect Hamlin at all.

After discussion with teams and drivers, NASCAR decided not to hold the originally scheduled practice session for the Cup teams at Talladega next week. Since restarting the season last month, the races have run with no practice and only the Coca-Cola 600 had time trials for qualifying.

But the racing hasn’t suffered.  Maybe a few individual teams are a little behind the curve, but the hours of practice aren’t really all that valuable. There are a lot of directions NASCAR could go with this for the future,  so it’s worth keeping an eye on as we roll further down this road.

On the other hand, it could make next weekend’s race at Talladega interesting. Quin Houff has never turned a lap at the track, and there are others with no experience at the track in a Cup car. Keep an eye on this one because it could help determine new rules for the future.

How… is the early playoff picture shaping up?

It’s too early to say who’ll have momentum on his side entering the postseason, but the top of the field is filling out.

Hamlin’s a lock with his third win of the year. Kevin Harvick, Joey Logano and Brad Keselowski are also in with multiple wins, while a single win each has Chase Elliott, Truex and Alex Bowman sitting pretty.

Ryan Blaney and Kyle Busch can probably be written in in ink at this point; neither has a win but both have been close and both are solid in points. Pencil in Kurt Busch and Johnson, too, but keep the eraser handy.

From the rest of the 16 spots, it’s still a bit of a free-for-all.  But with just over half of the regular season to go, isn’t that what keeps things interesting?

bad combo drivers not turning a lap at ‘dega and no practice.

maybe mother nature will be kinder at dega since there’s no lights.

I would have no problem if Nascar instituted either on track qualifying, or say, a 45 minute practice at each track. It would give teams a chance to make sure everything is buttoned down without taking up a lot of time or needing more people at the track.

It has been for quite some time.