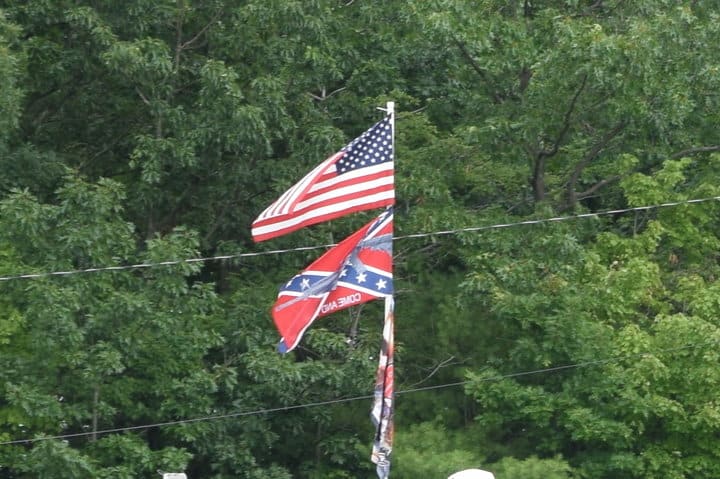 Displaying the confederate flag will no longer be allowed at any NASCAR events and properties, the sanctioning body announced Wednesday (June 10).

The news comes after the guidelines for conduct during the national anthem were removed before last Sunday’s race at Atlanta Motor Speedway. This allows for peaceful protests during the pre-race ceremonies.

“The presence of the confederate flag at NASCAR events runs contrary to our commitment to providing a welcoming and inclusive environment for all fans, our competitors and our industry,” NASCAR said in a statement. “Bringing people together around a love for racing and the community that it creates is what makes our fans and sport special. The display of the confederate flag will be prohibited from all NASCAR events and properties.”

Prior to the Atlanta event, Bubba Wallace sported a shirt with the words “I Can’t Breathe” and “Black Lives Matter.” Additionally, NASCAR official Kirk Price knelt during the invocation and national anthem.

Wallace will run a special paint scheme at Martinsville Speedway to support the Black Lives Matter cause.

And Talladega is right around the corner.

NA$CAR you’ve got what you wanted you’re now like NFL.

It was nice knowing you back in the old days.

And the there’s the last nail. It was fun in the 70s and 80s otherwise enjoy the race to the bottom.

So what is Bubba’s next demand, because the mob is never satisfied? If NASCAR really followed through with their convictions they would make sure he wins and if not well then it is just posturing. But a year from now when racing has been declared banned because it is wasteful and not acceptable to the “New Green Deal” regime then this will all have been kabuki theater.

What’s next? Confederate flag tattoo? Cover it up. Cross medallion on your neck? Get rid of it. Living in a city that was deemed a town that was an ally of the South? Your not wanted anymore. I’ll tell NASCAR right now. One crewmember, crew chief, driver, owner ,official takes a knee, I’m gone. I know you won’t miss me. You’ll have a whole new fan base that will carry up the slack. Good luck.

OK here is my line in the sand. I don’t care if you have a public service announcement, I don’t care if you say a prayer for racial injustice, I don’t care if you ban the confederate flag, but so help me, if you allow kneeling during the anthem I am gone. And if that is the case I hope your attendance and ratings go so low that the very advertisers you are trying to please no longer have a use for you. The worst part is the people who are thrusting this damned if you do/damned if you don’t won’t support NASCAR regardless of what they do. In fact they will still wish NASCAR goes the way of the dinosaur. I will be watching the anthem tonight very closely.

Bill B – they are. Read where NA$CAR has relaxed it’s standards for opening ceremonies.

Well if there was someone kneeling it wasn’t shown on TV and it wasn’t Bubble because they showed him standing.
I could have done without the black power raising of the arm at the end by whoever that was that sang the national anthem but he is an outsider that NASCAR has no control over (other than to not invite him to be invited back).

I still hope NASCAR ratings and attendance crater for alienating their core fans but so far, my line has not been crossed. So I will continue to watch although they were already on thin ice as a result of the last 20 years of ruining the sport. As I said previously, I have no personal relationship with the confederate flag but I stand by those who have now lost the freedom to express themselves by flying it. Freedom of speech means you have to put up with those who’s speech you despise as well as those you support. NASCAR has now decided to wage war with their bread and butter fans. I hope they pay a steep price.

Mack
Reply to  Bill B

It is a shame politics over shadow a night race at Martinsville.

Pandering & surrendering to the violent, treasonous, treacherous intimidation & extortion methods used by the
“B”urning “L”ooting “M”arauders , …. who are financed, organized, & supplied with riot materials, by the same politicians who released thousands upon THOUSANDS of criminals & violent offenders upon the public just in time for the destruction of major cities, oddly enough, (as usual) PRIMARILY in the black neighborhoods ? ?

The NAACP loves it! From their Twitter: “In this moment it’s good to see entities like @nascar taking the necessary steps to remove symbols of hate, racism, and discrimination from their events.”

I was born in SC and have lived here all my life. I was a typical southern white male teenager, listening to Skynyrd and watching Nascar. I’ve always been proud of my southern heritage. Funny thing, though… I never gave a rats ass about the confederate flag. It’s a relic from a war fought over 150 years ago before any of us were even born. Personally, I could care less about that flag. What pisses me off is that people in power use the flag to keep us divided and distracted. If we’re preoccupied with fighting with each other, we won’t notice their real agenda, which is, of course, the accumulation of wealth and power. It’s pure manipulation, and it’s working. We’ve gone to ridiculous lengths to appease the mobs in hopes that they will play nice. Don’t believe me? In the last week, the TV show “Cops” has been cancelled by Paramount TV, “LivePD” has been suspended by A&E, and HBO announced they won’t air “Gone With the Wind”. Gone With the Wind! It’s ludicrous! And now Nascar has jumped into the cesspool of virtue signaling. It may be the politically correct thing to do, but it reeks of pandering, and it fixes nothing.

The head of this disgusting pimple has been festering for decades. This is not the forum to cite chapter and verse truth of which is fact. This is not the beginning of something new and shocking, this is on schedule for a decades. A ideolog that hates this country, and wants to transform it! Facts and truth be damned! Who does not see what is coming is naive. They drink the lies and want more. Hence the anarchy today, the PC BS. WOW! One thing people are so stupid about, you concide one demand from these idiots, so many think they are OK with that mob! Nope! School yard bullies wanting your lunch money one day, and the next it is every day. IT DOES NOT END! STOP IT!

Sad to see how many people are tone deaf. If the fact that you can’t bring a flag that represents a terrible thing makes you want to stop watching or following the sport, good riddance.

Well, NASCAR finally crossed my line. Was hoping NASCAR would show a little backbone but it just gave in like the NFL. Don’t be surprised and its coming when the “Old Glory” will be banned and just about any historical monument will make someone “uncomfortable” and will be removed. Now with the “Deep State” well entrenched, the future of the USA looks both bleak, scary and doomed. Luckily for me being in my 70’s I won’t be around to witness the final collapse. Perhaps, the worst part was that our country committed suicide by it’s own impolsion.

Nascar hasn’t been the same since since Dale hit that wall in Daytona. I’m done

A lot of these comments crack me up.
“Nascar won’t allow me to show how racist I am. I’m going to go pout in the corner.” (paraphrased)

Their ratings are already tanking because the younger audience doesn’t want to sit on their couch on a beautiful summer Sunday for 3+ hours; a fairly large number doesn’t even have cable TV to even watch the race. There are a few exceptions, but I’m sure you’ve noticed how empty the stands were before the times of Covid. If Nascar fails, it won’t be because they stopped allowing racist symbols into the speedways.

Hopefully you will gain some level of understanding and a sense of love for your fellow Americans even if they don’t look like you. Judging by the comments, I doubt it. But, I’ll still hope.

I would guess that most of the replies here show how little progress has been made, by Nascar or anyone else. Now you know why people are marching in the streets demanding justice. Never known anyone else to be so proud of losing a war. I don’t see many germans hoisting swastikas.

shows why there remains such a stereotype about Nascar. And I don’t think there obvious bid to overlook their own history won’t change much.