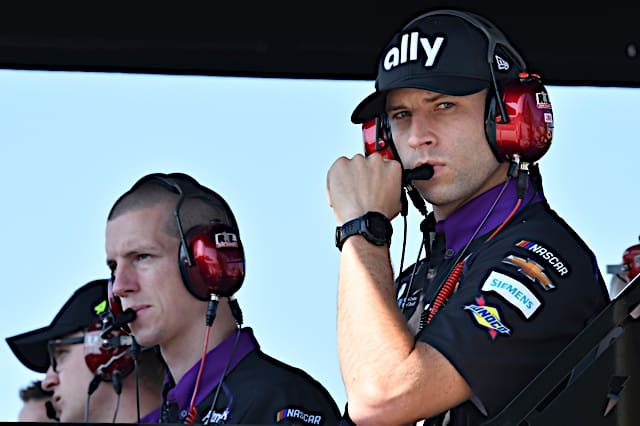 Jimmie Johnson has failed post-race inspection in his final Coca-Cola 600.

After finishing second in the Coca-Cola 600, NASCAR announced after the race that the No. 48 car of Johnson failed post-race inspection. Johnson started on the outside pole and lead six laps in Sunday’s race. As race leader Chase Elliott and others pitted in the closing laps, Johnson stayed out on old tires and maintained his second position through the green-white-checker finish. Johnson’s disqualification relegated him to a last-place finish, which also shuffled the starting order for Wednesday’s Cup race at Charlotte; William Byron will now start from the pole.

NASCAR Cup Series managing director Jay Fabian in a press conference stated that the rear alignment on the car was off when the car went through the optical scanning station. Fabian said, “There is a pre-race number and a post-race number that does give a pretty decent tolerance. It was outside of those post-race numbers.”

No. 48 team crew chief Cliff Daniels had this to say after the news broke early Monday morning.

Disappointed about our post-race OSS. We think something must've broken but won't know until we get it back to the shop tomorrow and can diagnose. Tough news after a strong night. This team is getting stronger We are focused forward. We’ll be back Wednesday with another great car

I guess Rolex watches aren’t the new bribery material. Mr. Hendrick maybe needs to part with a couple Porches and Corvettes for the NASCAR officials. And if he gets caught, maybe another pardon purchase is in line.

All sarcasm aside, at least they are trying. And, it also show Jimmie can still drive a fast car and drive it in deep. Give him the equipment, he can win. I don’t like Chevrolets, but I like Johnson. Been going to races since 1963, haven’t missed a fall Charlotte race since then. Joined the 600s in 1965. Jimmie Johnson is one of the five best. People can say its the car, but someone has to hold the steering wheel, anticipate, feel the car. He can hang in with Curtis Turner, David Pearson, Richard Petty, Tim Flock, Buck Baker, Fred Lorenzen, Fireball Roberts, Tim Richmond, Bobby Allison, Dale Earnhardt.

Or a leukemia relapse. Oh wait he can’t afford to gain another chemo 50

I agree Charlie Jimmie Johnson one of modern time best there ever is. I believe Nascar is punishing JJ and Hendricks Motorsports over the 7th championship. I believe they are doing everything in there power to keep them from winning the 8th championship.

I’m wondering if he woulda been DNQd if he had won?

No. The win would be “ruled” cucmbered. And Mr. H would have protested the penalty and called in a few more favours.