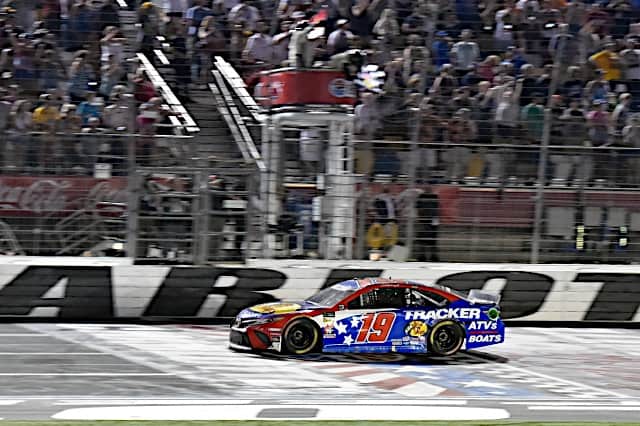 The Greatest Day in Motorsport will be a shell of its traditional self.

But thanks to NASCAR, it won’t be entirely empty, either.

With the NASCAR Cup Series done with a flexible shift to Darlington Raceway to restart the 2020 season, the tour is now preparing for its Memorial Day weekend classic, the Coca-Cola 600. The race will be the only major one held on Sunday, May 24, running without fans and with health screening and distancing measures similar to the ones utilized in South Carolina over the past week.

Gone will be the usual pomp and circumstance. There’ll be no honored military personnel present at the track, though names and schemes will adorn the cars. The usual weekend will instead be just another one-day show, with only qualifying separating it from the other races during NASCAR’s current coronavirus-adjusted schedule.

It’s as bare bones as a race schedule can be. Yet others would be so lucky to have it.

In Indiana, race fans have been left quiet and starved for racing, sitting through the first quiet Month of May at Indianapolis Motor Speedway since World War II. Hoosiers that traditionally plan their vacations around the joys of Carb Day and thrill of short track showdowns like the Little 500 have been forced to make other plans.

The state’s legendary Indianapolis 500 is intended for a run in the August heat, though it could shift as late as October depending on how the next few months play out. Even when it does run the event will lack some of the usual flair, missing the raucous thrills of the Snakepit concert in the infield.

Formula 1 fans continue to wait for a chance to see their stars and cars, and their annual part of racing’s grandest day has already been canceled altogether, with the Grand Prix of Monaco not expected to return until 2021.

Both IndyCar and Formula 1 have bigger issues at hand than one solitary race. The first doesn’t intend to kick off its schedule until June at Texas Motor Speedway, and the latter is still working through worldwide logistical hurdles as it tries to plan a hopeful start in July. Neither series has competed since 2019, with IndyCar’s hiatus lasting more than 200 days. Both series were on location to compete in March – F1 in Australia, IndyCar in St. Petersburg – when society’s mindset shift surrounding COVID-19 forced them each to call their weekends off.

Other tours have debated whether they’ll even hold or complete their 2020 seasons at all. Formula E’s traditional street circuits are essentially a non-option to wrap up the 2019-20 calendar, forcing the all-electric tour to look at permanent road courses as an option to continue.

MotoGP has faced a litany of delays, with the sport’s Italian epicenter one of the hardest-hit areas in the early days of the coronavirus. Others like DTM, NHRA and the British Touring Car Championship could go as late as August before resuming.

It’s been a brutal time for motorsport tours worldwide, and no one knows when the surreal experience will finally draw to a close. Race fans hoping to attend anything beyond their local short tracks may still have months of waiting ahead of them.

Even returning tours like NASCAR and the World of Outlaws have to essentially start fresh with their plans, going to tracks that weren’t initially on the schedule in their current places. Darlington Raceway hosted stock car racing four months earlier than previously anticipated, while others like Chicagoland Speedway and Sonoma Raceway won’t see NASCAR at all this year.

Sunday’s Coca-Cola 600 is the first major race truly planned to run on the originally intended date. While the schedule around it will consist of additional shifted races, for a few hours at the end of the weekend NASCAR will provide an event that actually feels expected and somewhat standard.

Many years ago, the 600 was created with the vision of rivaling and outperforming the Indianapolis 500. But over time, the two races, along with Monaco, have come to be inextricably linked – a trio of marquee events that form what is essentially a motorsports holiday.

That holiday won’t feel the same this year. It’ll be empty for at least one more season, too. Monaco sits one week further back on the schedule in 2021.

Sunday is going to feel different for fans of all three tours. But NASCAR will at least provide one leg of the standard race day, and that’s better than nothing.

The race isn’t going to be perfect. Events without fans have proven to feel a bit hollow compared to standard races, and much of the pomp and circumstance will be stripped away due to the minimal attendance and distancing requirements of COVID-19.

But for at least a few hours, the Greatest Day in Motorsport will provide slight hint of normalcy.

That’s something worth cherishing given the strange new normal we’re all trapped in for the foreseeable future.

Its funny that you don’t realize how much you enjoy something until you no longer have it. Looking forward to the race this weekend even without all the “extras.” To me, the show has always been the show itself.

Stop this madness. Open up the country.