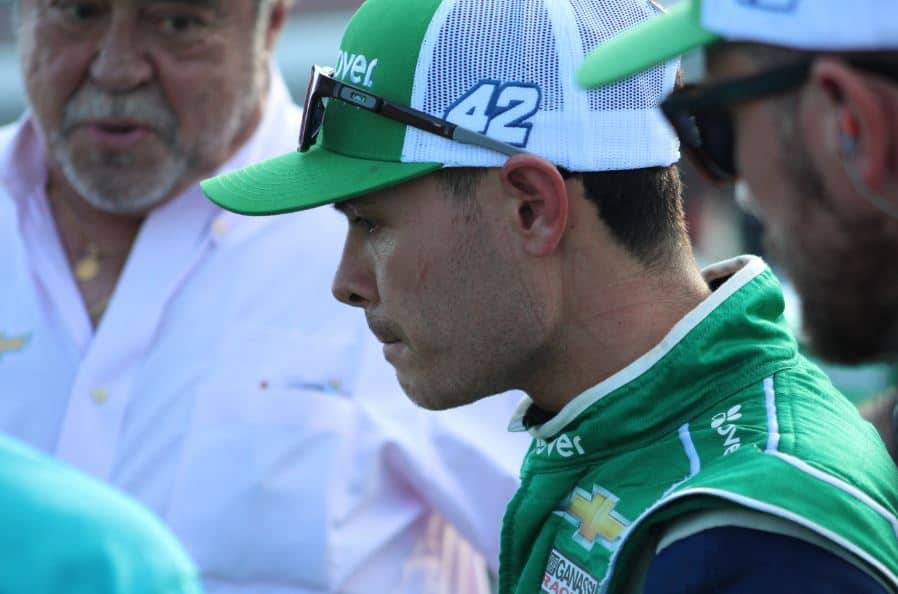 It has been written since early in the COVID-19 pandemic that American attitudes are perhaps more ill-suited than any other in the world to fight it. Americans, after all, have triumphed against previous existential challenges (World War II, 9/11) with aggressive, defiant, head-on clashes with their enemy. Staying silent on the sidelines is something this country has never done, and is currently finding itself challenged to do.

Going to the grocery store has now become perhaps the most perilous activity the citizenry must navigate every week. Walking down any street, be it a back alley or a main thoroughfare, requires peripheral vision as people enforce a six-feet gap between fellow passers-by.

If this pandemic has done anything, it has ensured that all actions, well-intentioned or not, are having exacerbated consequences. Freedom has never been so dangerous, nor so endangered.

iRacing, the lifeboat to which NASCAR and big-league motor racing as a whole has clung to during this time, has become a similar conundrum. On the plus side, it’s a welcome diversion for a fan base hungry for any form of live sport. iRacing has drawn millions of viewers over the course of the last few weeks while allowing many online to interact with their favorite drivers live and unfiltered from the comfort of their own homes.

But this freedom has proven, well, tenuous. Two weeks ago, Bubba Wallace saw Blue Emu, an associate sponsor of his ride at Richard Petty Motorsports, terminate its sponsorship after Wallace threw a tantrum and quit in the middle of an iRace after an on-track incident with Clint Bowyer.

Then, along came Larson.

Bubba Wallace “I lost a sponsor because of iRacing”

Shocking. Bone-headed. Moronic. Regardless of what context one attempts to put it in, Kyle Larson’s casual use of a taboo slur while chatting with his iRacing buddies on a Twitch thread Easter Sunday (April 12) was abhorrent. That’s especially true for a millionaire whose job, beyond driving a race car, is representing countless employees and companies. For Credit One Bank and McDonald’s to immediately terminate their sponsorships of Larson, as they did Monday, is no overreaction.

Yet just like ordinary Americans who have found their daily walks and shopping trips infused with danger, one of NASCAR’s brightest stars now finds himself living in a similar reality. It’s one where a stupid comment made while gaming has cost him millions in income and could realistically result in his race team facing unemployment. Though Adam Stern did tweet on Monday that both McDonald’s and Credit One’s sponsorship deals with Chip Ganassi Racing, not specifically Larson, remained in place, it has been scarcely 24 hours since this incident occurred. NASCAR sponsorships cost millions of dollars, and there isn’t a company in the world that’s not hurting right now.

Rewind back to 2013, when NAPA Auto Parts used the Michael Waltrip Racing cheating scandal at Richmond to get out of what had been a long-term deal with Waltrip, both as a driver and owner. NAPA didn’t view its termination as a sayonara to NASCAR, but as a means to wait for more suitable conditions. After all, it wasn’t long before they hooked up with blue-blood Hendrick Motorsports and rising star Chase Elliott.

Who’s to say Credit One or McDonald’s don’t opt to get out of a deal to sponsor a sport that won’t race again for months? After all, should the pandemic come to pass and NASCAR remains a sound marketing platform, there isn’t a team in the sport that wouldn’t bend over backwards to bring them into the fold. The freedom teams have to operate within NASCAR racing as independent contractors will prove curtailed by the freedom sponsors will have to come and go as they please. What will likely prove to be an economic depression in the coming months gives companies plenty of bargaining power.

The fallout from this incident is further problematic for NASCAR from a perception standpoint. It’s a sport that has been dogged by stereotypes of a racist fan base for literally decades. As ignorant as they may be, Larson was trending on Twitter within hours of his Twitch video going viral, with a platform saturated by tweets such as the one below.

Imagine that a #NASCAR racer using a racial slur. Who's surprised by that?? Isn't that part of their culture? #KyleLarson #Racist

It doesn’t matter that NASCAR has gone above and beyond perhaps all professional sports over the last decade to increase minority participation. They’re literally working to field race cars for aspiring minority drivers with the Drive For Diversity. Larson, the driver who slurred, is a graduate of the program himself.

Sadly, that’s irrelevant now. All that matters is a NASCAR driver said something that’s oftentimes used as a racial slur. The damage is done.

Expect the aftershocks to filter into iRacing. For all the positives it has brought over the past few weeks, Larson’s comment is what unfiltered access looks like. The PR reps aren’t looking over their drivers’ shoulders at home or online these days. iRace day is not actual race day; there’s no way in hell Matt DiBenedetto would ever leave the Wood Brothers hauler in his underwear on a Sunday morning at the track.

Big-league NASCAR’s professional filters are absent. Add in the filters, nerves, whatever you want to call them of all Americans, straining under a month of lockdown at home, and the freedom of unfiltered access has proven dangerous. The mix of it has now bitten stock car racing. Hard.

That’s not to say NASCAR hasn’t faced such dangers before. In an attempt to stymie declining attendance, NASCAR’s “Boys, have at it” edict in 2010 proved problematic almost immediately, when Carl Edwards violently flipped Brad Keselowski on the Atlanta frontstretch barely a month into the Cup Series season. That triggered a series of nasty on-track incidents which culminated with a scary crash coming to the checkers in a NASCAR Xfinity Series race at Gateway, Ill. That wreck saw Brad’s father Bob threaten to get back behind the wheel to ensure Edwards “didn’t kill his boy.”

The sport is still more tolerant of on-track incidents than they were 20 years ago, but the laissez-faire approach of 2010 is gone.

A year ago, NASCAR had to back off its TV-friendly group qualifying format because the freedom teams had to make their own runs translated into 10 minutes of boredom followed by 30 seconds of pandemonium. That culminated at Fontana when the entire field of Cup cars failed to make a lap to actually go for the pole. Since then, the order of single-car qualifying has returned, though with TV intermissions built in.

And perhaps most relevantly, NASCAR has squared up with an “N-word” controversy before. Longtime Xfinity Series regular Jeremy Clements found himself suspended from competition in 2013 following a report that Clements had used an “intolerable and insensitive remark” during an interview at the track that MTV editor Marty Beckerman said utilized a phrase including the slur. Clements was reinstated after completing sensitivity training that was required by the sanctioning body, missing two races to do so.

The attempts to equivocate those situations have run rampant on social media. It could be argued that Larson should be subject to a penalty similar to Clements, with a mandatory sensitivity program required before reinstatement. It could also be argued that the Larson situation, which was caught on video and also saw him attempt to erase records of this misdeed, outstrips the case against Clements, which was based on an alleged recounting.

There were others that quickly tried (in what I’d argue was a racist act in its own right) to tie Wallace’s issues with Blue Emu a week ago to Larson’s episode. Some argued Larson should be all but castrated given how much worse his transgressions were.

If Bubba Wallace had to lose a sponsorship over iRacing, Kyle Larson needs to lose his ride completely. Racism is unacceptable, period.

We don't need an explanation, we don't need to consider context, that word shouldn't be used, period.

It’s a lose-lose situation for NASCAR. Crucifying Larson means cutting ties with one of the few minority drivers in its ranks, a 20-something they’ve spent millions marketing both for his talent and the bridge he provides to the resurgent ranks of dirt racing. Playing compassionate and understanding in the era of “cancel culture” risks further corporate outrage in an era where sponsors are going to be more apt to avoid risk, especially as multi-million dollar backers are idling as racetracks sit empty.

Regardless of which tact NASCAR chooses to take, changes are likely to hit iRacing immediately. It wouldn’t be surprising to see driver participation scaled down at the insistence of their race teams. At a minimum, participation is going to likely be much more supervised, much more sedate. The dangerous freedom that it has provided will be curtailed to at least some degree. When racing actually does return, the same safety culture is likely to remain. There’s desperation to ensure that corporate sponsors ready and able to stay in racing are given no easy out, or in this case, compelling reason, to take a hike. Peaceful servitude to team and sponsor is the way the pendulum is likely to swing for Cup racing whenever it returns.

For without dangerous freedom, racing high-powered cars at high speeds would cease to exist.

BOWLES: ONE WORD, ONE NASCAR CAREER SELF-DESTRUCTED FOR LARSON

The Larson incident cannot be compared to Clements because Larson’s comment was actually caught on camera. As a comparison, lot’s of sports figures have been accused of domestic abuse of their wife and it usually did not end up ending their career, but Ray Rice actually got caught on camera and there was no road back for him. I think the same will be true for Larson.

I am not saying that Larson should not face some penalty. I do find it extremely offensive that NFL players take a knee during the National Anthem and suffer no consequences. The league even defends them. That flag represents hundreds of thousands that have died for our freedom, and to knee during the anthem is offensive and disrespectful.

The race issue in this country is never going to improve to the levels we all want until the double standard ends.