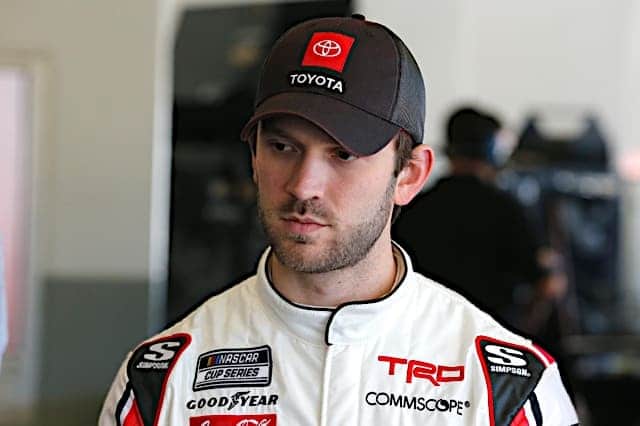 Entering Thursday’s (Feb. 13) Bluegreen Vacations Duel races at Daytona International Speedway, Daniel Suarez is in a position he’s never been in before — having to race his way into the Daytona 500.

The fourth year NASCAR Cup Series driver is confident he can do it with his new team, Gaunt Brothers Racing.

Suarez is in this position because Stewart-Haas Racing elected to go with NASCAR Xfinity Series standout Cole Custer to fill the No. 41 car for 2020. That left the 28-year-old without a ride until January, when he paired up with Gaunt Brothers.

Gaunt Brothers Racing, owned by Marty Gaunt, has competed in a total of 38 races over the past three seasons, running just 15 last season. Since the announcement of going full time on Jan. 28, it’s been all hands on deck for the race team.

In some areas, the team is still looking to fill positions.

“My goal is to take this team – a team that nobody knew, it was a part-time team, to a winning team in the future. That’s my goal, and I’m going to work really hard to build it that way.”

Suarez mentioned his mindset for the his Duel race is to keep the No. 96 Toyota clean in order to advance. He’s also got three Toyota teammates in the race that he hopes can help push him to advance, with Denny Hamlin, Christopher Bell and Martin Truex Jr. in the first Duel.

“My mindset is to go out there and execute, no mistakes and be aggressive when I have to be aggressive and be smart,” Suarez said. “If I can do my job, I don’t have to kill myself to make it happen. I feel like I just can’t beat myself up. If I can do that, we should be fine.”

In some sorts, it’s ironic that Suarez is back under the Toyota banner. After all, the fallout between he and Joe Gibbs Racing was often noted in 2018, mentioning he “learned a lot about people.”

However, Suarez was adamant that Toyota wasn’t the one that wanted him gone. In fact, they wanted to keep him, especially after the history the two sides had made together, including being the first foreign-born driver to win a NASCAR national touring series championship in 2016.

“Toyota did everything in their power for me to stay,” Suarez said. “Toyota has been one of the best supporters that I’ve ever had. Some of you guys don’t know, but Toyota and I go way back to before I moved to the U.S. I was supported by Toyota Mexico. I came here and was supported by Toyota. To be honest with you, last year I missed Toyota the most.

Awkward or not, Gaunt Brothers is getting support from Toyota Racing Development in 2020, and Suarez is hoping to lead the team to the promised land.

Well Daniel I don’t think Gibbs will be interested in offering much help. Enjoy your last year in the states.

Bill B
Reply to  timinchandler

Agree with the first point but he could make a Cup career running for third tier teams. He wouldn’t be the first.