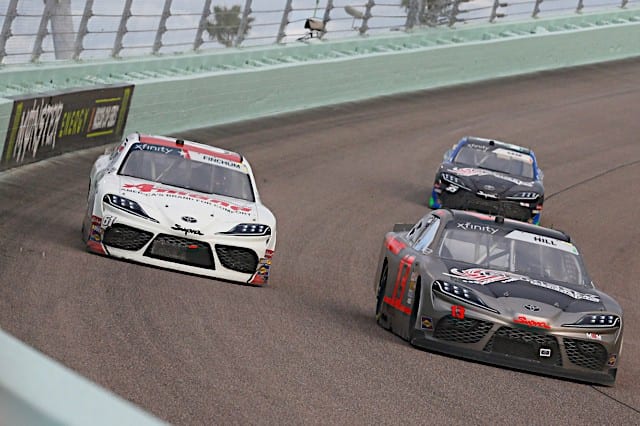 After running four full-time Xfinity Series teams in 2019, MBM Motorsports is scaling back to just two such teams in 2020, putting more of an emphasis on its NASCAR Cup Series program.

Team owner Carl Long tells Frontstretch that running four teams in 2019 was a bit much at times, with his team’s best car finishing 29th in owner’s points. Scaling back to two full-time teams should allow the team — 30 people deep (36 including its engine program) — to focus more in individual areas.

Long confirmed that there is no set driver lineup, but Timmy Hill and Chad Finchum will be the team’s primary drivers. He’s expecting a rotation of drivers similar to its 2019 lineup, should a driver bring funding to the team to fill one of its two slots. The team will run three cars in the season opener at Daytona International Speedway on Feb. 15 and could also do so sporadically throughout the season.

“The bottom line is whoever really has a deal with us that can write a check and make it work out,” Long says. “After that, I might just go back to two cars in Xfinity after we get through Daytona.

“It depends on how the third car comes out and if we can run it for the first five races. If one of my cars doesn’t do well that I’m expecting to do well and we get through the first three races in the points and my third car is up in the points, we’ll just race the third car and let the other one roll over.”

For Daytona, Hill will be piloting the No. 66 car, while Finchum will be in of the other two efforts.  A third driver has yet to be named.

“I think this year, I’ll probably be in the seat quite a bit more and probably bouncing around between Cup and Xfinity again for Carl and MBM Motorsports,” Hill tells Frontstretch. “It’s always a fun time, because I never know what I’ll be doing and there’s always another venture for me.”

After Daytona, Long says it’s all about who can bring money to the table, noting Finchum will likely run the majority of the races (he has competed in 63 races for MBM over the past two years).

“I’ve got 100 candidates, but I don’t know how many of them that can cash a check,” Long adds. “The reason I put it that way is because you’ve got to have a lot of time and effort to chase sponsorship.

“The way I look at it is, I’m not the right guy to go to a board meeting and tell them the demographics of NASCAR. I’m not a marketing guy. I’m a guy that works on cars, drives the haulers, welds and stuff like that. There are a lot of good drivers out there that have good marketing programs that are behind them to help give them a sponsor. It’s easier for me to be an avenue for that driver to find a sponsor than it is for me to get a sponsor.”

Finchum confirms to Frontstretch that his camp hasn’t added additional funding from the 2019 season, though it’s looking positive.

“As a driver, the offseason is kind of nerve wracking because you don’t really know what next year holds for you,” Finchum says. “But I’ve got all that planned out and I’m excited to be back.

Other drivers Long names as interested in competing for MBM are Max Tullman, Bobby Dale Earnhardt, John Jackson and himself, all of whom ran races for the team in 2019.

Long says that veteran crew chief Doug Richert will return for his second full season to work with the third team when it runs, while Danny Johnson is listed as Finchum’s crew chief and Ryan Bell will lead Hill’s efforts.

Long had to lay off some employees over the offseason after spending the most money he ever has in the sport last season.

“Racing off the winnings and sponsorship, we just don’t have a huge amount of leeway in our payroll to put people on,” he says. “I spent way more money this year in payroll than I ever have. I’ve never had to lay anybody off over the winter, but this year I had to.”

Joey Gase will not return to the team in 2020, after finishing 24th in drivers points last year. Tommy Joe Martins also announced he won’t be returning to the team via a Periscope video on Dec. 8.

The team will be running Toyotas for the 2020 season, though it hasn’t committed to particular car numbers. Long says he still has ownership in the Nos. 13, 42, 61 and 66.

I know these sponsors don’t fall out of the sky but it sure would be nice to see Carl have the funding to keep Timmy in his car. Timmy has the talent to keep his car up front of… He just needs enough funding to at least come in to the pits and get new tires when needed. Got my fingers
..eyes… Legs… And everything else crossed for you Timmy