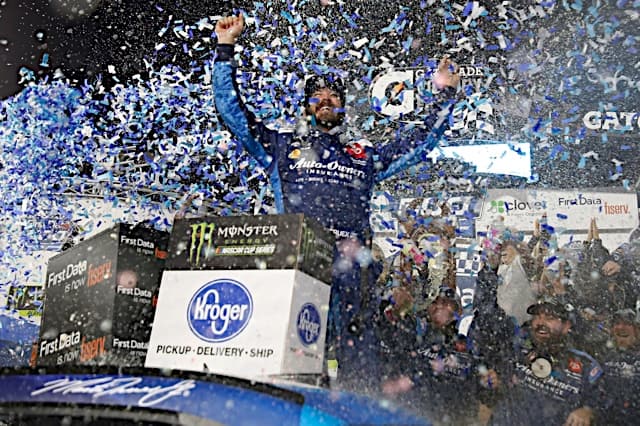 Martin Truex Jr. sure knows how to dominate a race. At Martinsville Speedway, Truex led 464 out of 500 contested laps to earn his seventh victory of the season and a spot in the Championship Four. With a one out of four shot at claiming his second championship, is Truex the title favorite?

Denny Hamlin may have scored a solid top five at the Paperclip, but he ruffled a few feathers in the process. Despite feuding with another competitor, it might as well be summed up as a display of typical short track racing. Right, Joey Logano?

The top Penske car as of late has seemingly been Ryan Blaney. After lagging behind his teammates for most of the season, Blaney has persevered through the treacherous postseason, collecting a win at Talladega Superspeedway and a top five last time out at Martinsville. Can Blaney overcome his current points deficit or win one of the following two races to give Roger Penske a shot at another title?

Chad Knaus’ driver might just be bringing the seven-time championship-winning crew chief back to success after all. Yes, Martinsville runner-up William Byron put on a show at the Paperclip, including fierce aggressive duels with Blaney, Truex and others. To quote Truex, “did they put Jeff Gordon back in that car?”

Unanswered questions still dawn the landscape as NASCAR enters the home stretch of its season with just three races to go. All through the offseason is near, our panel of Frontstretch gurus were challenged to determine the 12 best competitors in NASCAR currently.

In an alternate universe without Truex, the First Data 500 was quite the show with nail-biting battles between Blaney, Byron and Hamlin. However, in a world with Truex, the New Jersian had a bigger gap on the field than Fox Sports 1 had on the truck broadcast. Despite Truex being on another planet speed-wise, there were plenty of fantastic battles throughout the field at the Paperclip.

Frank Caliendo may just have to dial up Hamlin for tips on how to impersonate Logano. Despite the fourth-place finish, Hamlin won the impersonating contest by far. After all, NASCAR was sanctioning a race on a short track, so you cannot really fault Logano, because it was indeed short track racing.

Martinsville Speedway is a perplexing oddity for a self-admitted Harvick. He struggled to keep pace with the leaders at the track that has been somewhat of a confusing circuit for Happy. Although he has found it difficult to navigate around Martinsville, it was another decent showing for the 2014 champion, worth of a free bloomin’ onion. How nice of them.

While Truex disappeared out of his windshield, Blaney managed to have a clean day amongst the lead cars. Although he slid to second, Blaney actually narrowed his points gap and is one step closer to advancing to Homestead. He also was very lucky to have a front-row seat to a “friendly” dogpile.

Also, apparently Blaney is a country.

The real star of this photo is Blaney at the bottom right corner, like "Joey's my teammate, but I'm in Denny's basketball league, so imma just be all Switzerland here."

While Hamlin might be impersonating him, Logano might just be impersonating Napolean Bonaparte with all the battles he has been getting in. He has seemingly found a common enemy: Joe Gibbs Racing drivers. Let’s review…

Logano and Denny Hamlin got into a scuffle with Hamlin at Bristol Motor Speedway in 2013. In 2017, Joey Logano got into it with JGR driver Kyle Busch at Las Vegas Motor Speedway. At Martinsville one year ago, Logano won a battle in “a damn war” against Truex. The conflict resumed again this year, this time with Hamlin.

But who could forget when Matt Kenseth “lost a tire” and took Logano out in 2015.

While Joey Logano had other conflicts to worry about, Kyle Busch found some of his own. At Martinsville, Busch not only had to deal with his frustrated/exuberant truck driver Todd Gilliland, but Aric Almirola also wasn’t too pleased either with the Candyman. That makes sense because M&Ms and bacon don’t go well together.

While teammates Blaney and Logano may be Switzerland and Napolean, Brad Keselowski was just solid. Although he is no stranger to conflict either, Keselowski stayed focused on the task at hand, which netted him a decent third-place finish … albeit with a few battle scars.

Not a bad night @MartinsvilleSwy
P3 with a few battle scars…
Thank you #2crew and our fans ??? pic.twitter.com/1wZQnSkepU

No, Jeff Gordon was not driving the No. 24. However, in a nostalgic throwback, Byron emulated many of Gordon’s famed runs at Martinsville last Sunday. Looking back at Gordon’s career, the NASCAR Hall of Famer earned his first career win at age 22. Maybe that’s why Byron couldn’t take the top spot. He’s only 21.

.@WilliamByron was awesome today. That kid deserves a drink. Which I promise you he can legally have now. #NASCARPlayoffs

How do you think Katelyn Larson survives with not one, but now two racers in the house. Do you blame her for her post-race activities in celebration of her husband’s win at Dover International Speedway?

In his first MENCS start at Martinsville, Elliott finished 38th. Elliott was caught up in numerous issues that day and brought home a crumpled, bear-bond covered Chevrolet home 73 laps down. This time, Elliott did much better. The Dawsonville, Georgia kept all the fenders on his Chevrolet and brought the car home only 55 laps down this time. Quite the improvement.

CHASE: Bringing it to the gara…

This week’s winner of the bluntest tweet goes to Kurt Busch, who is in fact who he says he is. Who knew?

On this week’s edition of Bowyer’s social media chronicles: A pot is stirred, a chalky driveway and McDonald’s now serves filet mignon.

Martin Truex Jr said he had no issues with Blaney in practice. And Clint Bowyer thinks I am stirring the pot lol … #nascar pic.twitter.com/bXCi483eWP