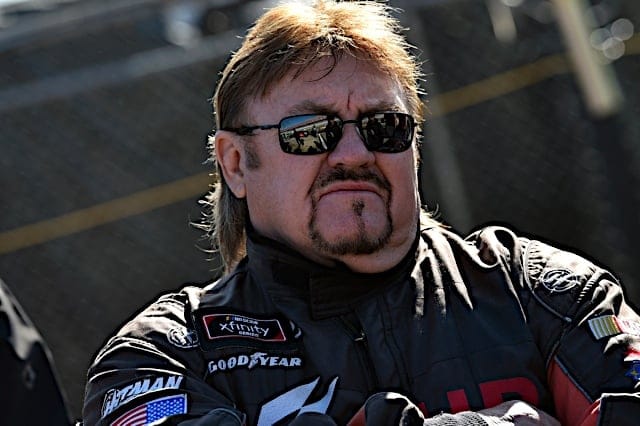 Mike Harmon has dedicated his entire life to racing, and he’s happy to see all the blood, sweat and tears over the years finally pay off.

When thinking of Harmon, you don’t think of him being a threat for a victory … ever. In fact, for most of his career, his primary goal was to qualify for NASCAR races, whether it be at the NASCAR Xfinity Series or Gander Outdoors Truck Series levels. However, he’s seen a ton of growth in the entity that has become Mike Harmon Racing.

Harmon, 61, has raced for 19 seasons in Xfinity, starting a total of 283 events. He’s best known for the infamous Bristol Motor Speedway crash in 2002 — hitting an open crossover gate, which split his car in half — while driving for GIC-Mixon Motorsports, owned by Gregg Mixon.

What many people fail to realize is Harmon actually has over 300 Super Late Model victories in the Southeast (he was the first Southern All-Star Champion and has multiple track championships), thus why he didn’t make it to NASCAR until a later age.

Compared to other seasons, 2019 has been a success for Harmon’s team.

“It’s been a decent year,” Harmon recently told Frontstretch. “I’ve had a lot worse, had a little better. Two weeks before Daytona, I wasn’t even sure if we were going to have a team. It worked out where we’ve been here all year, competed in all but two races and looking to continue for the rest of this year and go forward into next year.”

The offseason was a challenge for MHR. Up until the end of 2018, the team ran both Chevrolets and Dodges. But as of 2019, teams could no longer compete under the Dodge banner.

Harmon needed to readjust. Additionally, the starting fields were cut from 40 cars to 38 for 2019.

“It’s hard to invest a lot of money if you don’t know if you’re going to get it back,” Harmon added. “It was an unknown with cutting two cars out of the field, it weighs on you pretty heavy. We had been running the Dodges for the past few years, got behind a little bit on technology, and when Dodge got out of it, there was no more technology.

“It got us behind, but we got some Chevrolets and got the composite bodies, so we’re running better this year. Much better than this time last year.”

Harmon has raced in 17 of the 30 races this season. Along with Weatherman, Hammann and Nemechek, Camden Murphy, Tyler Matthews, Dan Corcoran and Aaron Quine all made at least one start in the company’s No. 74 car.

Why doesn’t Harmon run every race as the driver?

Like every other NASCAR owner, racing is a business to Harmon, and he’s chosen to not only dedicate his life to racing, but also make a living from it. If a driver comes in with any sort of funding, he’s likely going to give them an opportunity. He admits that you can’t challenge your inner-competitiveness on emotion, or “you’ll go broke.”

“Just make sure everybody’s got what they need and try to get the cars dialed in as much as I can,” Harmon said of his role. “I go down into the corners and watch the cars and tell them what I’m seeing. I give Tyler any advice we can get him. Joe knows what he’s doing, we all pull for him. I do whatever, make sure the bills are paid.

“Seven days a week, it never quits. I’m always hands-on, always something going on on the phone business-wise. I’ve got to make sure everybody’s paid and make sure the guys have what they need to work on the car. There’s never a boring moment.”

Investing in anything on a limited budget is a challenge. But don’t tell Harmon that.

“I tell people that I really loved [racing] when I was a kid and had nothing else but this, but the love affair has faded a little bit,” he said. “I still enjoy it, and I miss it if I’m not at the racetrack. I gave my life to it, and it’s what I’ve done. I don’t regret it, and I’d do it all over again. I feel fortunate enough to be able to do it as long as I have.

“I still love the competition, it’s just I wish it was a little more old school than it is now. I feel like we have to do a lot of stuff with our hands tied behind our back. I’m not complaining, it’s just the way it is. It doesn’t seem to be as much fun as it used to be.

“You’ve got to be willing to do whatever it takes, and you can’t count the hours that you have to put into it. It takes a lot of dedication, a lot of hard work, and you’ve got to make a lot of smart decisions. There’s not much life other than that.”

This season, the team partnered with Rick Ware Racing to field the No. 17 car. At the beginning of the season, RWR was in charge of the team, but since the team is now focusing more on its Monster Energy NASCAR Cup Series efforts, Harmon has been placed as the man in charge of the No. 17.

Adding a second full-time car has been another challenge for Harmon, especially since the team operates off the race winnings week to week.

“We basically race on what the car earns,” Harmon stated. “That’s what I can count on and what I’ve got my team setup to run on, any sponsorship is a bonus. I have a pretty good idea of what that’s going to be for each race.”

Being 61 years old, Harmon is among the older Xfinity Series owners, but he has no plans of slowing down anytime soon.

“As long as I’m healthy, having some fun, making a living and making the guys a living, I don’t see no plans of retiring,” Harmon said. “I don’t even like saying that word. I still enjoy it. If we’re going to run decent, I’ll be happy with that.”

“There’s nothing like driving,” he said. “Once you’ve driven, the sad part about it is nothing ever fills that void — fishing, hunting, none of that stuff. The only thing that I think I might be able to survive is – I love hot rods and something like that – if I’ve got something vibrating around me. Other than that, it’s all about the cars.”

With just five full-time employees and three races remaining in the 2019 season, the No. 74 sits 35th in the owner standings, the best the team’s been since 2013 when it finished 33rd.

Harmon is hoping he can build momentum off 2019 into an important offseason, as the series is reducing its fields to 36 cars per race in 2020.

“Always do the best we can with what we’ve got,” Harmon said of his goals. “Earn respect, put the best car on the track that we can on the track. Going forward, be strong and make MHR as strong as we can make it.”

Quote from the article:

“I still love the competition, it’s just I wish it was a little more old school than it is now. I feel like we have to do a lot of stuff with our hands tied behind our back. I’m not complaining, it’s just the way it is. It doesn’t seem to be as much fun as it used to be.”

So… If it’s not as much fun for the team owners, the teams, and the drivers… how is it going to be fun for the fans? If the teams are having fun, the fans will have fun – at least it can’t hurt.