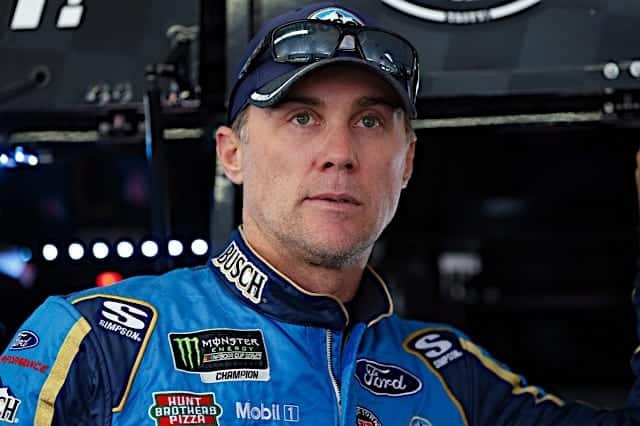 Though Kyle Larson led 60 of the first 78 laps on Sunday at Kansas Speedway in the Monster Energy NASCAR Cup Series and even held as much as an eight-second lead in stage one, it was Denny Hamlin who had the truly dominant car.

Spending 153 circuits out in front of the field, the driver of the No. 11 Toyota survived a trio of restarts inside 10 laps to go, including a double-overtime finish, to score his first win at Kansas since 2012.

Meanwhile, Kurt Busch was one of just three non-playoff drivers to finish inside the top 10 with a fourth-place finish. After qualifying 15th, the driver of the No. 1 Chevrolet didn’t score a single stage point and never showed any real speed throughout the weekend. But a trio of late-race restarts allowed him to work inside the top five.

“We got fresh tires at the end and the outside lane really worked well for us,” Busch said on pit road after the race. “I was able to give it a lot of throttle on time and knife my way up to fourth place. It was nice to have Advent Health on our car today. We had a breast cancer survivor Nicole riding with us and she got us a top five. We struggled a little bit, didn’t get any stage points, but you can’t be disappointed with a top five.”

Perhaps what’s more important about that run is that Busch still hasn’t announced his 2020 plans and even dodged the question during his media availability on Friday (Oct. 18). His first top-five finish since a win at Kentucky Speedway gives the driver of the No. 1 momentum heading into the final four races of the season to make the case for his return to Chip Ganassi Racing next season.

Simply put, it’s not over until it’s over. While Hamlin appeared to be cruising to an easy win, Ryan Blaney slapped the wall hard, and the field initially stayed green. But when the right-rear tire on the No. 12 car started shredding pieces all over the track, the yellow flag flew with less than 10 laps remaining.

That ultimately set up a pair of overtime finishes that changed the playoffs. Brad Keselowski was in position to barely edge his way into the Round of 8 despite a dismal late-race run after contact with Erik Jones. Instead, those two overtime finishes ended in the No. 2 team being eliminated from the playoffs and Chase Elliott squeezing into the final spot for the next round.

It’s a clear example that nothing is set in stone until the checkered flag flies. The No. 9 team could have easily given up and accepted its elimination from the playoffs. Instead, Elliott fought on and pushed for the runner-up finish that kept Hendrick Motorsports’ championship hopes alive while his other two teammates were eliminated.

LUNKENHEIMER: CHASE ELLIOTT EDGES BRAD KESELOWSKI FOR ROUND OF 8

Rookie Daniel Hemric scored his first career pole and led just the first four laps before giving up the top spot to Larson. He quickly faded through the field and was outside the top 10 before the end of stage one. He never sniffed the lead again and, in fact, wasn’t in the top 10 at the end of stage two either. Hemric got caught up in a wreck on the first attempt at overtime and ended his day on the wrecker with a disappointing 31st-place finish. It’s his fifth DNF in his rookie season and his third in the last 10 races.

This whole year beats all I’ve ever seen or heard of ??‍♂️……I know this sport is a rollercoaster ride of emotion, but I feel like I’ve been on the drop zone for 32 weeks. Hopefully start the upward trend next week @MartinsvilleSwy. https://t.co/9lQyiTshGG

Jimmie Johnson and Kevin Harvick both share the honor of being the all-time winners at Kansas. A 10th-place finish for a seven-time champion seems like a lackluster performance at best. But for Johnson, it’s a continued step in the right direction in a season that’s seen him struggle through a pair of crew chief changes after losing Chad Knaus heading into this year.

Harvick’s weekend started off in dramatic fashion when his car technically failed inspection three times on Saturday following qualifying. He wasn’t allowed to run a lap and was forced to start 40th, and while he recovered to a ninth-place finish, it was hardly the race the three-time Kansas winner was looking for.

“That was not a very good weekend from top to bottom. I just didn’t have a very good car today and didn’t have a very good day on pit road,” Harvick said after the race. “Nothing went right all weekend. It was definitely one of the worst weekends we have had in a while. We had to start in the back and had a tough day getting through traffic. A couple times we got up there and then had bad stops and got mired in traffic. It didn’t go as planned with our Jimmy John’s Ford but we did what we needed to do to get to the next round and now we get to start over.”

And while race day wasn’t exactly what the No. 4 team was looking for, it all really started with Saturday’s issues. You can look at it and play the what-if game, but that would be pointless since there’s no going back and changing the decision. What’s important for Harvick and crew chief Rodney Childers is to move forward knowing they’ve got just three races to keep their championship hopes alive. Anything that happened this weekend is over and done with and can’t be a distraction in the coming weeks.

This one actually goes back to the Xfinity Series race on Saturday. Once the checkered flag flew, Cole Custer and Tyler Reddick tangled on pit road in what turned into a large fracas involving multiple crew members. The pair disagreed on late-race contact that ultimately cost Custer the top-five finish of which his car was capable.

What’s important here coming down the stretch is how NASCAR chooses to handle the altercation, though lately the sanctioning body’s policy has been to let the driers police themselves. And while there’s an off week before the series races next, it remains to be seen whether Custer and Reddick will have problems over the next few races.

With both of them running for a championship and each capable of putting their cars in the Championship 4, if they get too caught up in fighting one another, there’s a chance neither one ends up getting to race for the title.

Hamlin’s win at Kansas gives Joe Gibbs Racing 16 wins in 32 races this season, a number that almost seems unreal. And while the organization hasn’t been as strong lately, the victory is the highlight of a resurgence of sorts. Though only three of its teams remain in the playoffs following a dismal first round for Erik Jones, all four of JGR’s cars placed in the top seven at Kansas.

“It is so hard in pro sports to stay up and keep performing,” JGR owner Joe Gibbs said. “The only thing I would say there, it’s about the people. We have great people back at the race shop preparing everything. I just wish a lot of them could be here. Then our drivers, our crew chiefs, their teams.

“Right now we have very good chemistry. It’s not going to buy us anything next week, the problem is. I get so nervous. I was all excited about the day, then someone mentioned next week, and I almost threw up.”

It’s easy to point as JGR as the team to beat in the series right now. After all a win rate of 50% bodes quite well in the coming weeks, and though there are many factors that can stand in the way, it’s not unrealistic to think the organization can put multiple cars into the Championship 4. If all three can execute the way they’ve shown they can in the next three races, it could turn out to be those three and someone else racing for the championship at Homestead-Miami Speedway next month.

This race just exemplifies the true crapshoot that this ‘championship’ is.

Don in Connecticut
Reply to  sb

This race sounds like the perfect reason that showing the nonsense called “If the race ended now, here are the standings.” Well, the race is not ending now and showing the points before the race is over is stupid because so many things can change. But I’m sure the networks will go on doing the same thing.