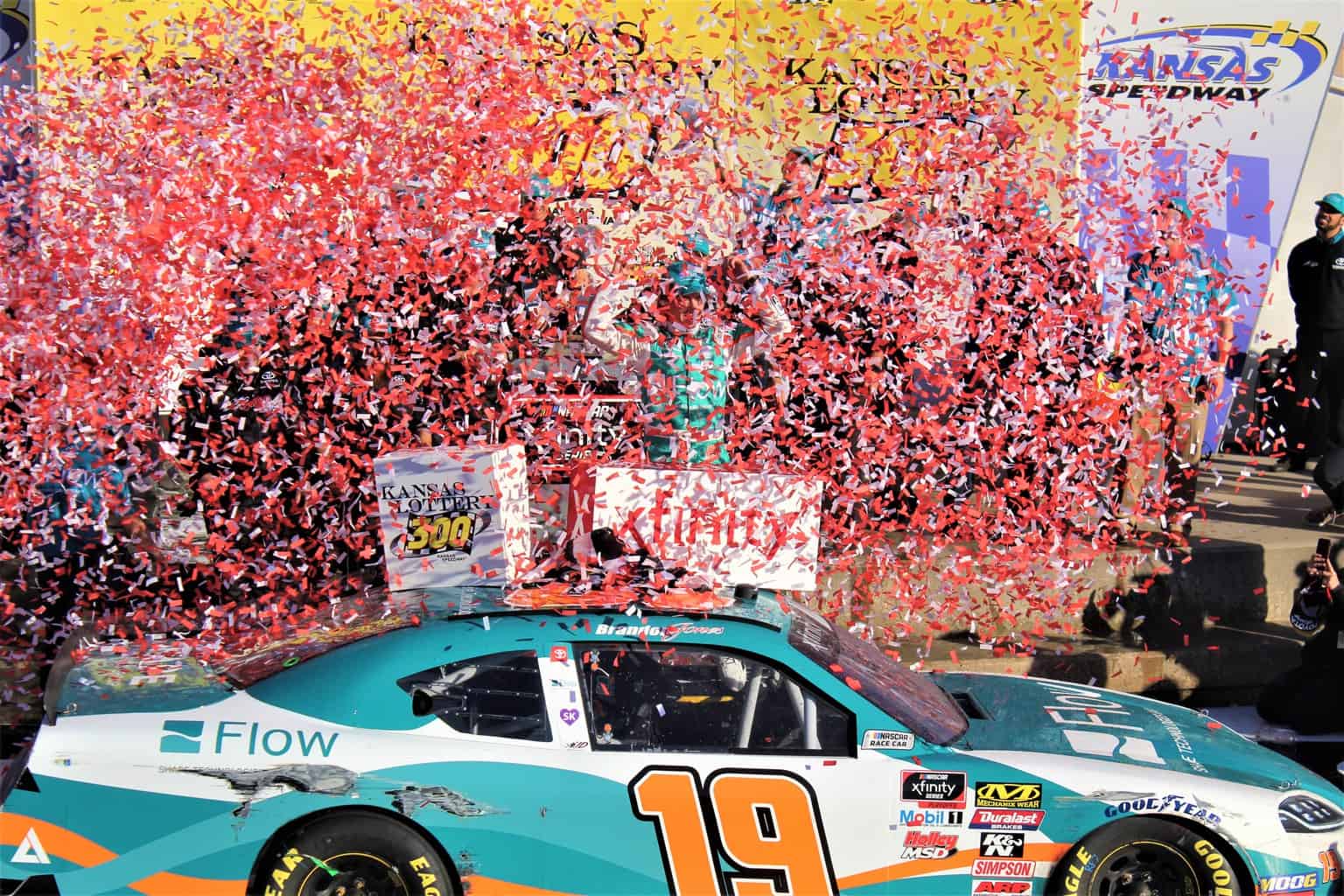 Although the Big Three controlled the 2019 Kansas Lottery 300, including being the top three earners in stage points, late restarts put them on alert. When the checkered flag flew, Brandon Jones won the NASCAR Xfinity Series race at Kansas Speedway. It is his first career victory in any of the three major national NASCAR series.

Jones saw his championship hopes end in the previous race at Dover International Speedway when he was eliminated.

“I knew this was going to happen. I knew we were going to get to this race track after getting knocked out of the playoffs without a shot to win the championship. I’m super excited. This team has been to hell and back with me for a couple years now. I cannot believe we pulled this off today.”

Jones took the lead for the first time after a restart on lap 191. He held off playoff drivers Tyler Reddick and Chase Briscoe, denying any driver an automatic berth to the Championship 4.

Cindric’s troubles compounded in the second stage. After racing with Harrison Burton, on lap 71, Cindric hit Burton. The aggressive move caused Burton to come down into Cindric, then shoot into the wall. Burton’s No. 18 Joe Gibbs Racing Toyota suffered terminal damage, ending his race.

This isn't good. ?@AustinCindric and @HBurtonRacing make contact and the No. 18 gets into the wall. #KSL300 pic.twitter.com/7L9QKnb1bf

The contact also affected Cindric’s No. 22 Team Penske Ford. On lap 80, the tire rub led to a flat tire, forcing him to pit under the green flag. As stage two neared its end, Cindric needed to pit for another flat tire. Cindric ultimately finished 25th, six laps down.

Custer won the second stage, Bell finished in second, and Reddick was in third place.

With a restart on lap 151, Justin Haley turned into Custer. Custer saved his car but lost several positions as the field drove by him on the first lap of the restart.

On lap 164, John Hunter Nemechek spun, bringing out the sixth caution. At that time, Briscoe was fending off Bell, simultaneously threatening to have one of the Big 3 on the Round of 8 cut line.

All the leaders had one set of fresh tires in the pits, and everyone except Michael Annett opted to pit.

With 15 to go, Briscoe and Bell battled hard for the lead and they approached Garrett Smithley. Smithley came up the race track a little bit, Briscoe let off, unsure where Smithley would go, and Bell and Briscoe both plowed into Smithley.

With a fresh set of tires awaiting him on pit road, Annett pitted. His fresh tires didn’t get him the win, but he finished in fourth place.

The restart bred another caution as Joey Gase and playoff driver Noah Gragson were involved in an incident. The wreck ended Gase’s day, but Gragson soldiered on to a 13th-place finish.

On the restart, Jones grabbed the lead from Briscoe. Reddick passed Briscoe and made up a lot of ground, but there simply wasn’t enough time. Jones celebrated his first win by joyously receiving the checkered flag.

Smithley came up the track a little but !!! Duh, watch it again and again. Smithley was an idiot, he was almost to the wall when the idiot caused the two race leaders to collide with him and each other. What a fool move that was. Call it like it happened, don’t sugar coat it.

Baby Busch should be thinking that the car HE ran into held his line, as lapped cars are supposed to do, and Kyle still managed to run into him, misjudging the closing rate.

It’ll never be Baby Busch’s fault. He’s a legend in his own mind, like a few more of the drivers.