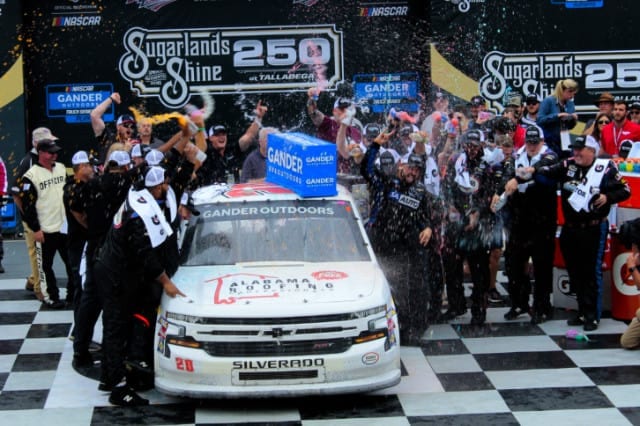 Johnny Sauter may have crossed the line first, but Spencer Boyd emerged victorious at Talladega Superspeedway in the NASCAR Gander Outdoors Truck Series.

Boyd was declared the race winner after NASCAR reviewed the finish and determined that he blocked second-place Riley Herbst coming to the checkered flag, sending both Sauter and Herbst below the yellow line.

The win was the first for Young’s Motorsports, who fields three full-time trucks in the series. Boyd started the season driving the No. 20 full time for the team before moving to a part-time schedule to pursue more opportunities in the upper series of NASCAR.

“Two weeks ago, I wasn’t running this race,” Boyd said in victory lane. “…Four years ago, I was selling cars with my dad at Hendrick Automotive Group. A lot of people have believed in me to get me to this point. … Man, I don’t drink beer, but it’s gonna happen tonight.”

Todd Gilliland was listed second after Sauter’s position was relegated to the last truck on the lead lap (14th). Herbst, Brett Moffitt and Stewart Friesen rounded out the top five.

“It ain’t the first win NASCAR’s taken from me,” Sauter told FOX Sports 1 after the race, visibly frustrated with the call.

Despite multiple cautions throughout the race, most trucks remained relatively unscathed until a restart with just under 10 laps to go. On lap 88, race leader Ross Chastain turned across the nose of Sheldon Creed while trying to keep the lead, spinning in front of the entire field and causing a multi-truck accident.

Then, with two laps to go, Gus Dean spun while running third in a one-truck wreck, sending the race into overtime.

A controversial move by NASCAR occurred during stage two, when Moffitt and Friesen were found to be locking bumpers, with officials directing them to take a pass-through penalty. Both teams — as well as some of the FOX Sports 1 broadcasters — disagreed with NASCAR’s assessment. Matters were made worse for Friesen, who later had to serve another pass-through penalty for being too fast on pit road.

Creed won the first stage of the race, while Friesen claimed stage two.

Moffitt exits Talladega in the points lead, 22 points ahead of Friesen. Tyler Ankrum and Chastain, meanwhile, sit outside the cut line for the Championship 4.

Actually Sauter’s comments were a bit more colorful!! Something about a bat and a ball…. The crowd had a good laugh.