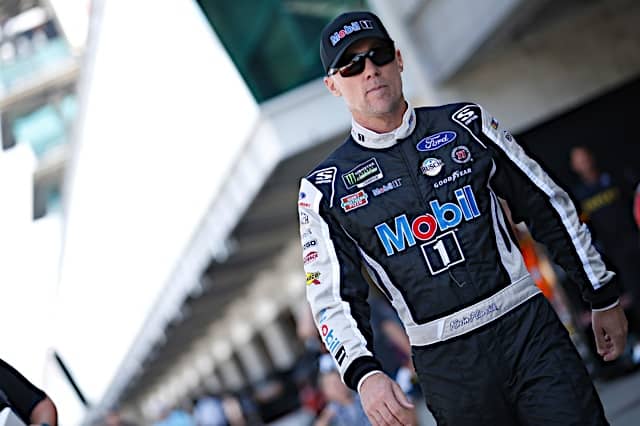 Next to the actual Monster Energy NASCAR Cup Series points standings on that little gem of a site, www.racing-reference.info, are the non-playoff standings. They show how the 2019 Cup season would be playing out under the original “most points over 36 races” format.

And with six races to go, under the classic system, five drivers are separated by a mere 50 points: 49, to be precise. Kevin Harvick leads the way, just eight markers to the good over Kyle Busch with Joey Logano snapping at their driver’s boots, some 22 markers in arrears. Joe Gibbs Racing veterans Martin Truex Jr. (fourth, -31) and Denny Hamlin (fifh, -49) round out the drivers in contention. In short, we would have a genuine and bona fide five-way battle for the championship.

Now, of course, you can’t guarantee it every year (which, to be fair, is why the playoffs started in the first place). But wouldn’t it be great to see these five drivers going all out in the “traditional” format over the next six races? I understand that’s a total pipe dream and we’re likely never returning to the old format. But work with me for a minute. How excited would we all be by such a thrilling run-in?

Yes, we’ll get our Game 7 moment at Homestead-Miami Speedway next month. But part of me will wonder how this year would have played out in a parallel universe. What might have been …

TWO: Next Up, Talladega

Pull those belts down extra tight as we head to Talladega Superspeedway for the second of three races in stage two. Originally, the final race in the second stage will be the third year that ‘Dega is the middle race of the three. Given the vagaries of the high banks, I, for one, am glad that drivers get at least one last shot at Kansas Speedway to rectify any woes resulting from 500 miles in Alabama.

Sunday (Oct. 13) will be Cup race number 101 at the 2.66-mile circuit, and it was Chase Elliott who won the last Cup race held here this spring. Boy, would this weekend be a good time to pull off a sweep …

Team Penske’s top duo leads the way at Talladega when it comes to all-time wins. Brad Keselowski sits atop the standings with five victories while Joey Logano has three (more on him below). Ricky Stenhouse Jr. has the best average finish (11.8, 1 win, 12 races), and, like Elliott, is another driver who could really use a win considering his uncertain Cup future.

Given the playoff ramifications, expect Sunday to be even tenser than usual in NASCAR land. Should be a fun one to watch.

In his 500th Cup start, Denny Hamlin finished fifth at the Monster Mile, having led the field to the green flag — the 157th top-five effort of his 35-win, 14-season top-echelon career. The Chesterfield, Va. native sits 23rd on the all-time wins list and five more victories would tie him with Mark Martin in 19th, inside the top 20.

Hamlin has two Daytona 500 victories, two Southern 500 wins and has won the Bristol Night race on two occasions. He owns five Martinsville Speedway grandfather clocks and captured the 2015 Cup All-Star race. The one glaring omission on Hamlin’s otherwise glittering resume is, of course, a Cup championship.

He’s come close before, finishing second in 2010, a year in which he really should have won, and third twice in 2014 and 2006, his rookie season. Back then, he had a shot at the title in the final race of the season, albeit an outside one. Hamlin has also finished in the top 10 of NASCAR’s Cup standings on seven additional occasions (plus an 11th and a 12th-place finish) with the only aberration being his 2013 season. That’s when he finished 23rd, missing four races following a compression fracture in his back after a last-lap crash at Auto Club Speedway.

By most objective measures, Hamlin’s record is NASCAR Hall of Fame worthy. But does he need that long-awaited title to guarantee that spot? Given his form this year, he may just get a shot to finally pick up that elusive title.

It was an absolute nightmare scenario for Joey Logano at Dover International Speedway on Sunday afternoon with his car needing to go to the garage for repairs while the rest of the field took the green flag. In the end, Logano finished 34th of 38 drivers, 25 laps down. That’s good for three measly Cup points.

But problems for other playoff drivers, notably Ryan Blaney (35th) and Chase Elliott (38th), whose engine expired just eight laps into the race, meant Logano’s horrible day was not quite as disastrous as it could have been. But his quest for every possible point he could pick up infuriated some of the leaders who felt he raced too hard given how far adrift he was. Hamlin, in particular, sounded off on Logano’s racing etiquette.

Just don’t expect the criticism to bother the Team Penske veteran one iota. With two races to go in the second stage, Logano still sits in ninth place, tied with William Byron on points for the cutoff line. He’s also headed to a track this weekend in Talladega Superspeedway where he’s won three of the last eight races. All is far from lost given where he might have finished up were it not for the misfortune of other playoff contenders.

As I’ve said repeatedly in this column this year, beware the threat of Logano. Despite a really bad afternoon, I’m not changing my mind just yet and giving up on the reigning Cup champion.

Finally this week, it was another race, another solid run for Matt DiBenedetto who finished seventh at the Monster Mile. In a nice act of symmetry, the effort was his seventh top 10 of the season and the 11th of his career 170 races.

“This whole second half of the season has been really satisfying, just climbing up in the points and performing really well,” DiBenedetto said. “It’s an amazing group I have the privilege of working with, and I’ll never forget working with these guys. They’re so good and so fun.”

Next season, DiBenedetto will take over in the No. 21 Wood Brothers Ford, replacing the retiring Paul Menard. But the way he continues to finish off this one-year deal with Leavine Family Racing is quite impressive.

Five drivers is better than 12 drivers with a shot at the title? If you say so….

50 points under this one-point-a-position system is A LOT to make up. And you can hardly compare the two, as drivers will race differently under different points systems.

What you call a bona-fide five way battle is in reality a two-way battle with Joey Logano still in the hunt.

Bill B
Reply to  Kevin in SoCal

Yes, five DESERVING drivers is better than 5 deserving drivers and 7 undeserving drivers undermining the legitimacy of the championship.
Good point about the one point a position making 49 points a larger spread than it seems. I would just point out that the stage points (as much as I hate the stages) gives drivers a chance to make up points faster than you might think.

It’s usually predictable which drivers will get fake points.

This years points battle has been intense with the top spot being swapped multiple times by several drivers. As soon as 1 has taken the lead they have run into some issues and lose it. Almost like no one wants to hang onto the top spot and pull away with the championship.

So glad we have a circus to overshadow this classic battle between the sports best.

Re “Given the playoff ramifications, expect Sunday to be even tenser than usual in NASCAR land.” there is also a chance that it could result in a less exciting race as playoff drivers play it safe. It wouldn’t be the first race that the chase has neutered. There are several drivers (those with the most points going in) that would be wise to ride around at the back for most of the race.

Where on the racing-reference.info site is the “classic” points? I couldn’t find it.

I am in the minority but I still miss the old points system. Back then , the only thing I would have liked is to give the race winner some more bonus points to really emphasis winning. And I really dislike stage racing. Points now are too convoluted to understand between stage points, playoff points and race points.

Bill B
Reply to  Darrell

No one can prove it, but I don’t think you are in the minority. Add in disliking wave arounds and lucky dogs and you will check most of the boxes.

Hi Darrell – if you look at the bottom right of the individual race page you can see it.

Just a question, if you know, in the “old school” rankings, are they using the old scoring system? The other thing that plays into this is the Charter System. You had a set amount of provisionals, 7 I think, if you had trouble qualifying. Wouldn’t be an issue the last couple years as most races don’t have a full field.

NASCAR – “where the points are made up and the racing doesn’t matter.”

I should sell that on a T-Shirt, but I’m afraid Drew Carey might sue me…