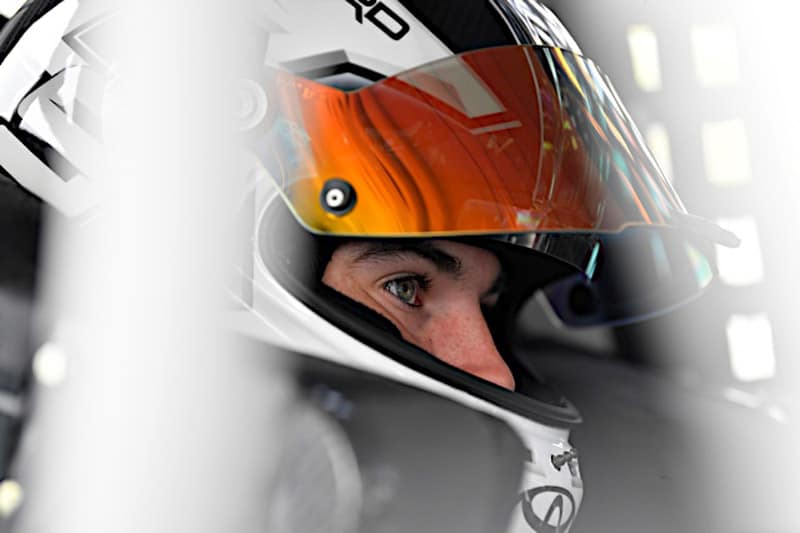 After losing a seemingly certain win at Salem Speedway earlier this season after pitting just before rain ended the spring race early, Chandler Smith didn’t make the same mistake twice. Racing hard with his championship-contending teammate Christian Eckes, Smith made a clean pass on the backstretch on lap 161, mere laps before rain ended the Herr’s Potato Chips 200 33 laps short of the finish. The win was Smith’s fifth of the season and seventh of his career.

This is Smith’s FIFTH victory of the season in just 11 Series Starts. @ToyotaRacing @Craftsman #TRD pic.twitter.com/9XgeZrJvUw

Smith was able to capitalize on mid-race misfortune for an otherwise dominant Ty Gibbs, who led the first 140-plus laps of the race from the pole before being brazenly wrecked by Joe Graf, Jr., who was charging with fresh rubber on an alternate tire strategy.

On the championship front, Eckes capitalized on what has been his most successful track on the ARCA circuit, taking the lead from Michael Self (who finished a pedestrian sixth) by 20 points heading to the series’ finale at Kansas Speedway. With qualifying in the top three offering ARCA bonus points as well as winning the race, both Self and Eckes will be paying close attention to Ty Majeski, who will be running in Chad Bryant Racing’s No. 22 in the season-ending event.

In 11 starts in 2019, Chandler Smith won five times and was a factor in nearly every race he ran. Consistent with that form, his clean power-move on Eckes for the race win was certainly worthy of the trophy. In a season where the full-time drivers in the Venturini Motorsports camp have made the ARCA title chase their own playground, Smith has more than held his own. Combined with strong showing in his limited Gander Outdoors Truck Series starts, it’s doubtful that we’ll ever see this guy run for an ARCA title … because he’ll be on a bigger stage when he turns 18.

Given where Eckes has been in the points race in 2019, playing from behind since that same Salem spring race due to being hospitalized, watching him storm to the lead on lap 153 and leave Indy with the points lead is an accomplishment in its own right. Especially considering that he had to battle from the back of the pack after incurring a penalty under the lap 52 yellow for driving off with a wedge wrench in the car. The question is … how will the No. 15 team play the hunted in Kansas?

Capping off a weekend that saw him win the K&N Pro Series East title in dominant fashion only to follow it up with tying his career-best finish despite slapping the frontstretch wall after on lap 61, Mayer served notice that a promotion is in due order.

Both Heim and Deegan scored top-five finishes in completely opposite fashions. For Heim, his debut foray into ARCA ended with his 10th consecutive top-10 finish and saw the No. 22 car rebound after dropping like a rock during the race’s first run.

For Deegan, playing contrarian on tire strategy after a quiet first run saw the No. 55 car become a top-five fixture, making it as high as second on the lap 153 restart before dropping in the final 15 laps of the race. Though Deegan still has seemed to struggle with longer runs in the heavier ARCA cars, Saturday night’s finish was a career-best and should provide needed momentum heading into her ARCA intermediate debut at Kansas in two weeks.

Though MAVTV reported that longtime ARCA veteran Bobby Gerhart was confident in the speed of his car, the stalwart No. 5 entry was a complete non-factor Saturday night, involved in an unassisted spin on lap 52 that brought out the first yellow of the race. Despite the spin, Gerhart finished two laps off the pace in 11th … his best finish of 2019.

Gibbs was livid with Graf after their tangle on lap 144, and for very good reason. The No. 77 visibly took out the No. 18, though it wasn’t intentional. Graf, who took four tires under a lap 97 yellow while Gibbs stayed on track as the race leader, enjoyed his strongest run of any race this season over the green flag run after that caution. He methodically mowed down the field and worked his way into second. As he was attempting to catch the race leader, Graf had to adjust his line on the frontstretch to avoid the lapped car of Tommy Vigh, Jr. As a result, Graf drove into turn 1 way too fast, and Gibbs paid the price.

For Gibbs, the resulting damage ended his race and his ARCA campaign in 2019. For Graf, the episode brought back ugly memories of his 2018 win at Berlin Raceway that saw him anger the entire ARCA garage by racing like a bulldozer.

It’s long been known that Saturday’s race in Indy was the (scheduled?) swan song of the steel-bodied car era in ARCA competition. Having said that, the longtime workhorse race cars of the ARCA ranks went out with a whimper rather than a bang. Ben Peterson’s No. 0 entry didn’t even start the race. Brad Smith’s No. 48 parked well short of the finish. The best finish for any of the old cars came courtesy of Mike Basham, who drove the iconic No. 34 to a 13th place finish, 10 laps off the pace.

Dick Doheny’s wreck on lap 97 was perhaps the perfect summation of the end of the steel-bodied car, if this is the end.

I love the composite body cars (though 5-Star HAS TO BUILD A MUSTANG ALREADY), but I’ll miss the distinctive look of each make’s old cars (assuming this is the end, of course).

Though Gibbs’ frustration was entirely understandable after being wrecked on lap 144, it was a bit odd (and amusing) to hear the driver who just celebrated his 17th birthday refer to Graf as “a kid.” Though the entire JGR camp appeared to be a bit confused about age this evening … shots from their pit road showed that the tires for the No. 18 had “IRP” written on them.

A couple of notes regarding car count: 21 cars started Saturday night’s race, and that’s honestly not a bad number given that it’s up from earlier this season and considerably higher than the K&N ranks (only 14 cars started the East Series finale at Dover on Friday). Having said that, looking forward to 2020, I see several concerns. For one, out of those 21 cars, at least three of them were old-bodied entries that can’t race next season. In short, if the car counts away from the superspeedways are going to go up next year, the ARCA ranks are going to be counting on an influx from the K&N ranks.

The viability of that influx is in question after this week’s announcement of the 2020 “merger” of the ARCA and K&N ranks. It’s a merger in name only. While the series’ are taking a solid step forward in homogenizing their race cars, the fact that the East and West tours are going to remain as standalone entities diminishes the incentive to run a full ARCA campaign, even with the “showdown” races that will dot the schedule. Car counts may go up for these races next year, but the days of 35 car fields taking the green on the bullrings are going to remain in the past.

Also of note regarding car counts… the technology in these ARCA cars is on the rise. Visible on Bret Holmes’ in-car camera all night was a digital dashboard similar to that seen in today’s Cup cars. While that’s technologically savvy, the advent of the digital dash in Cup has correlated with the lowest car counts that series has seen in decades. Here’s hoping that’s not going to become mandatory use.

ARCA’s officiating seems to be getting ahead of itself on this NASCAR merger, practicing consistent inconsistency. Case in point, following a restart near the midway point of the race, ARCA left the field under green after Tim Richmond spun on the backstretch, hit nothing, and kept going. Fast forward to the Graf/Gibbs debacle on lap 144, and the yellow flag flew despite there being no visible debris on track and Gibbs’ car being under power and moving.

And speaking of acting like NASCAR, let’s talk schedule. While the 2020 format announcement did confirm that a number of ARCA’s signature venues will remain on the slate next year, conspicuously absent from the dates confirmed were the dirt races at Springfield and DuQuoin. This, along with the apparent change in the K&N West schedule that will see the season opener in Las Vegas switch from the Dirt Track at Las Vegas Motor Speedway to the paved bullring. What’s the fun of being in Vegas if it’s not a little dirty?

The bullring will put on a great race, and I’m anxious to see the ARCA cars take both to the high banks of Bristol and the long overlooked short track in Memphis. If that comes at the cost of the two dirt races in Illinois, well, that’d be a NASCAR thing to do.

Every week the TV analysts tout Joe Graff Jr., like they had stock in him.
I look at most contact as just racing. But Joe G’s move in turn one was absolutely stupid. This is why he will never move up unless he buys his rides.