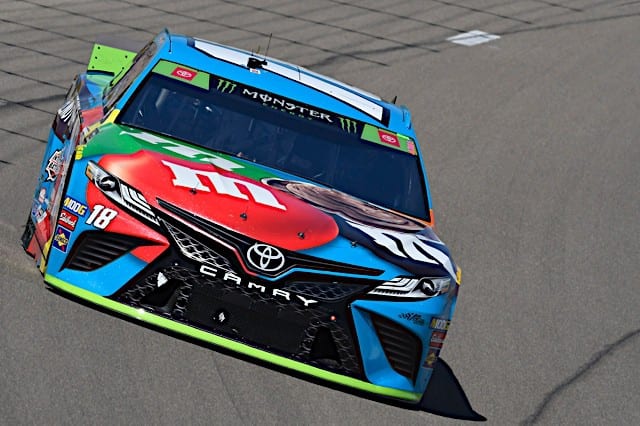 After Sunday night’s controversy between Kyle Busch and Garrett Smithley, a debate has sparked about who was at fault and what it should take to become a Monster Energy NASCAR Cup Series driver. Smithley has been racing in NASCAR’s national series for years, and has had some solid runs and success there.

What should NASCAR do with their current approval process? Is it time to go back to how it used to be where teams could, in a sense, “run what ya brung”? Should Smithley take the heat he has been getting or is Busch way too harsh?

Prime time events on a Sunday night are a very popular thing when it comes to sports. We saw a scheduled Sunday night NASCAR event for the first time in a very long time (other than Darlington and Labor Day weekend). Many fans have had mixed reactions to the later start time that we saw.

Should more races be shown in prime time? Should 3 p.m. start times become the norm? What factors should we consider as a whole when it comes to this happening more?

Q: Should NASCAR re-evaluate the approval process for the Cup Series or is it fine the way it is? Warren P., Olympia, WA

A: This would not even be a discussion had Busch not gotten on his own personal soapbox after the race at Las Vegas. However, it is something that should be brought up.

While Smithley may not be a good example of this, because he is talented and has his share of starts (144, to be exact), perhaps there are some drivers you could look at and say NASCAR needs to tighten up who they hand out licenses to.

This is not necessarily a swipe at a driver’s talent, but rather their experience level. Perhaps a minimum number of starts in the Xfinity and Truck Series should be established before allowing a driver to race in the Cup Series?

Back 10-15 years ago, it seemed like there was a much bigger approval process to run in Cup. We used to have guys run ARCA to be approved to run Xfinity, or Cup rookies run ARCA or one full Xfinity season before making the move to Cup full time. Joey Logano is the last driver I can think of who did not run a full Xfinity season and made the jump straight to Cup. Guys like Kyle Busch, Denny Hamlin, Martin Truex Jr. and Chase Elliott all had one or more years of lower series experience before they made the move to the Cup Series.

Nowadays, even though these lower budget teams obviously do not have the money to compete with the top dogs of the series, it feels as though just about anybody could run a Cup race. Is this right? In a sense no, because running the lower series teaches patience, awareness and how to put together full races.

There is no doubt the small Cup teams look for talent, but at the same time, money talks in the sport too. There are plenty of guys who have run Cup races for the first time this year who do have what it takes to make it in the sport. They just need a break. This goes for a lot of drivers who are not in top tier rides. We truly do not know what a driver has until they step into elite or at least above average equipment and impress the public.

NASCAR more than likely will not go back to a more stringent approval process, but should they? It would be a wise idea, but it does not seem like it will happen again.

A: After watching Sunday night’s race, I was asking myself this same question, and the answer that I came up with is yes, I would like to see more of it.

In just about every sport, there is a Sunday night game, whether it’s baseball, football or basketball. They each have their own prime time events.

The concern with NASCAR, though, would be the ratings part of it. We know football, baseball and basketball dominate America’s ratings when it comes to sports these days. NASCAR obviously has taken a hit the last few seasons in that aspect, but they have been slowly on the rise this year.

Another aspect to look at is NASCAR’s fan base. While it would be cool to race on Sunday night, people do have to be back at work Monday morning. Imagine a race ending around 10 p.m. on a Sunday night and you have to be at work Monday morning by 9 a.m. You also have to travel about three to four hours to get home, which means you will not get much sleep that night. This is an issue with the idea.

NASCAR is all about pleasing its fans (or attempting to), and even if it hasn’t happened this season, that is still the goal. The late start times have catered to the west coast fans, and a prime time race would work even better for some, being about 4-5 p.m. local time for most.

Obviously, you can’t please everyone. This is something that more than likely will be looked at in the future. Whether NASCAR actually puts anything like this into place has yet to be seen. There are so many factors that have to work out for it to truly be a success. Right now, keep the times as is, or even start earlier on Sundays (a lot of us are rooting for that). Prime time can wait for the future. It was cool for Las Vegas, but keep it there for now.

Agree that drivers in the cup series should have some minimum level of experience in order to race but it’s might be difficult to put that in words. Remember a decade ago when all those open wheel guys invaded the cup series? Should someone like Montoya have to spend the same amount of time in the lower series as a younger person just starting out in racing? How would you word that rule?

I thought the Sunday night race could work well for the TV audience if they started it by 6PM EST so that it ended by 10:00. However for the fans attending the race it would mean that they would need to take off the next day 90% of the time. So the question becomes do we want to further undermine race attendance? Tough question given the fact that the stands are often less than half filled at many races these days. I would still say the best compromise is more Saturday night races if they want prime time exposure and to avoid competing with the NFL,

Sundae night events are fine if your fans are mostly local and don’t have to drive several hours to get home. Not, I think, typical of a nascar race . As far as Kyle declaring himself the god of who is and isn’t qualified to run in Cup races, shouldn’t he, being such a ‘great’ driver, have been able to get around the #52? Several other drivers did. there was open track both inside and outside the car, and he held his line. On the street, if you rear end a car, YOU get the ticket. Kyle is just being his usual pissy self when things don’e work out the way he thinks they should. He made a bone headed move and it trying to blame some else. Man up!

nope. on the east coast there are people that get up early to head out to work. also if it would be a rain delay that means later start or monday race is more than likely.

Busch is an asshole.

Nobody will watch Sunday night and even fewer will attend the event.

I think that a minimum level of experience should be mandated, but not because Kyle Busch thinks so. I have to agree with Don in CT (and Brad Keselowski)…. Kyle Busch is an ass. Thirty-Eight other drivers had to deal with Smithley on the track last Sunday. Kyle likes to play “Get out of my way, I’m Kyle Busch!” and it bit him.

Sunday night races are a horrible idea. NASCAR can’t compete with the NFL… hell, I’m not sure it can compete with The Walking Dead, and that show is a decade old. And the points that were made about fans attending the race being inconvenienced and bad weather limitations cannot be taken lightly. I repeat, it’s a horrible idea.

Especially on a Sunday, why should fans have to wait all day for the event to start when there is basically a time limit on when they have to get home? Wave the green flag at 12:30 local time (and I mean wave the green flag and not start the pre-event crap) so there is time if there is a weather delay. Make the networks work with what NA$CAR’s schedule should be.

I don’t think NASCAR will schedule more primetime Sunday races, except holiday weekends. It’s just too much on the fans at the track and the teams. However, I was pleasantly surprised how the TV numbers worked out at Vegas. I think it helped not having to compete directly against the full NFL slate, only a Sunday Night Football game that didn’t get good until the 4th quarter. I think that argues for later start times 3 or 4pm eastern during the fall as to end races in that slot before the start of the Sunday Night Game.