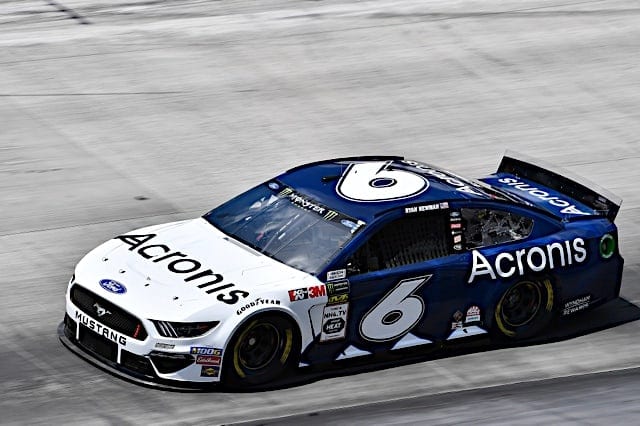 Coming into the Monster Energy NASCAR Cup Series race weekend at Indianapolis Motor Speedway, Ryan Newman was tied for the final playoff berth with Daniel Suarez. Both drivers were eight points behind Clint Bowyer and 18 points ahead of Jimmie Johnson.

Newman qualified 22nd for the 2019 Big Machine Vodka 400, the lowest of those four drivers. But during the first stage, Newman utilized some pit strategy to finish fifth, earning six stage points.

“Every point we’ve earned up to this point means something,” Newman said after the race. “It made something out of our season because being in the playoffs is a big deal.”

On the first lap of the final stage, disaster struck Jimmie Johnson, and his wreck ended his chances of making the playoffs. The moment was a close call for Newman — the first of many.

“A couple times I got ambushed on the straightaway,” he said. “One little push would’ve spun me out on the straightaway. No words to describe [those situations]. It’s like being on ice. Sometimes you don’t know when you’re going to stop.”

The close calls weren’t avoided by everyone. There were nine caution flag periods during the race. It wasn’t easy for Newman to keep his composure and avoid ending up in one of those incidents.

“I didn’t keep my cool all day but I kept it out of the fence,” he said “I could very easily have mowed the fence down. The dirty air made me about as tight as anybody out there.”

Regarding those drivers who were involved in those incidents, Newman bluntly shared his thoughts.

“Guys ran out of talent,” he said. “You have to be able to control your racecar. It’s like usual here. You see stuff happen on pit road which you normally don’t see at other racetracks. Because it’s unique you have to be prepared for all those situations.”

With 48 laps to go, Bubba Wallace restarted third. If he won, he would have clinched a playoff berth, knocking Newman below the playoff cut line. He didn’t fret; he was ”confident Kevin Harvick had a really good car and that he had it in the bag.”

As the laps wound down during the race, Suarez was behind Newman, but it appeared Suarez had a faster car. Newman was cognizant of the situation.

“I was watching him,” he said. “I knew he had a faster racecar. They put themselves in a bad position. We had track position. We didn’t have the greatest restarts there on the bottom. I wish we could’ve had the outside there a few times but it was what it was.”

What would he have done if Suarez caught him?

Newman finished the race in eighth place whereas Suarez finished in third place. He clinched the last berth into the Cup Series playoffs.

Newman said he is glad to make the playoffs in his first season as the driver of the No. 6 Roush Fenway Racing Ford, but he isn’t content.

“It’s good,” he said with a laugh. “That’s the best thing I can say. It’s good, but good is not good enough. We got to be great. Today, Harvick proved what great is. He won the pole, led the most laps, and won the race. I’ve been there so I want to get back there.

“Do everything we can. Do everything possible to keep progressing our team. We might get knocked out, we might prove come Homestead [Miami Speedway] that we could’ve won it if we were in it. I want to stay focused and do our thing.”

Great job Ryan and thanks for all the efforts You and Krissy put in for the animals at Rescue Ranch.

kb
Reply to  Fed Up

I am no fan of NEWMAN on the race track at all. That aside, Krissie is the glue it seems at the RESCUE RANCH and he is right there with her 100 percent! I support and appreciate their effort 1000 percent. Good Job Mr. and Mrs. Newman!

Never been a fan of Ryan but I’ve got to admit that getting a shitty Roush car into the playoffs was an amazing feat. Unfortunately it just reaffirms my belief that 16 cars in the playoffs is a joke,

It was amazing Newman got in despite all the help Suarez was getting from NASCAR. For instance, the caution when Suarez hit the wall early in the race and the elongated debris caution ending stage 2 with Newman getting no stage points.