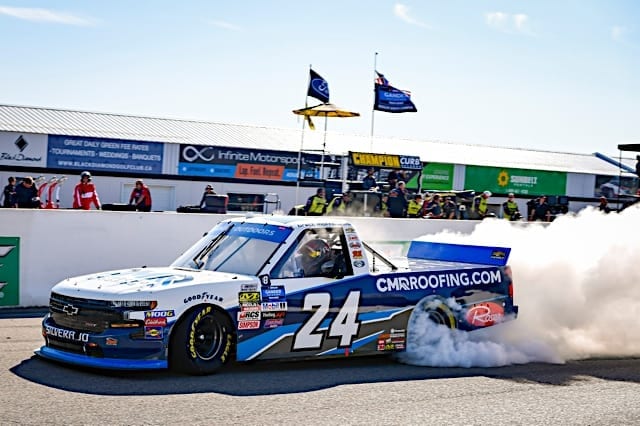 While the Monster Energy NASCAR Cup Series was off for the final time in the 2019 season, the Xfinity Series and Gander Outdoors Truck Series were both in action, and road course racing had an international flair as the NXS was at Road America in Elkhart Lake, Wis., while the Trucks were in Canada at Canadian Tire Motorsport Park in Bowmanville, Ont.

Who’s Hot & Who’s Not will be looking at at the lower national series divisions this week.

Christopher Bell is on fire, and he’s likely the favorite to win the Xfinity Series title for Joe Gibbs Racing this year before almost certainly jumping into the No. 95 for Leavine Family Racing next year.

Through 23 races, the Oklahoma native has cruised to six wins, four poles, 15 top fives, 16 top 10s and an average finish of eighth, which includes three DNFs (one for a disqualification). The only track type the dirt ace hasn’t claimed the checkered flag at yet is a superspeedway, having captured victories at short tracks, intermediate tracks and a road course with his win at Road America.

John Hunter Nemechek has had a rough summer. Since the July Daytona race, he has two third-place finishes, but those are his only top 10 results, crossing the finish line in 22nd, 12th, 36th, 12th, 31st and 26th in the other races.

For the season, he has four top fives and 12 top 10s in the No. 23 GMS Racing Chevrolet, currently holding the 10th spot in the 12-driver playoff standings.

Chase Briscoe doesn’t consider himself an adept road racer, but they’ve worked well in his rookie season. He’s posted runs of sixth, seventh and seventh this month after winning at the Charlotte ROVAL last fall. For the season, the driver of the No. 98 Stewart-Haas Racing Ford has a win at Iowa Speedway, nine top fives and 18 top 10s through 23 races. He could be a threat at Homestead, where he has a win in the Truck Series (2017).

Gray Gaulding seems like he will hold the “best non-playoff driver” slot this year as he sits in 13th, over 100 points out of 12th. Still, the No. 08 Chevy for SS Green Light Racing has notched a top five and three top 10s, though the road courses haven’t been great — 15th at Watkins Glen, 14th at Mid-Ohio and 29th at Road America.

Stage points haven’t been kind this season, as otherwise he would likely be ahead of JGR’s Brandon Jones.

Defending Truck Series champion Brett Moffitt has four wins, three poles, 11 top fives and 13 top 10s this season in his first year behind the wheel of the No. 24 for GMS Racing, with his only DNF coming from a Daytona crash.

Young’s Motorsports. They expanded to a three-team operation this season, and 18 races (out of 23 events) into 2019, that has accounted for just four top-10 results, two of which came in the wild card events of Daytona and Eldora. With none of their drivers making the playoffs, Spencer Boyd downgraded his schedule to part-time, and then Tyler Dippel was suspended without explanation last week.

Grant Enfinger hasn’t won yet in 2019, but the driver of the ThorSport Racing No. 98 Fordhas led the standings for almost the entire season, accumulating two poles, eight top fives and 14 top 10s, with his only DNF coming at Kentucky Speedway.

Paint Scheme(s) of the Week

Kaz Grala was driving Richard Childress Racing’s part-time No. 21 this week. His sponsor, Hot Scream, is apparently an ice cream with various spicy flavors, which doesn’t sound appetizing, but the car looked good. There are seven flavors, while the original inspiration came from mixing buffalo wings with vanilla ice cream while watching football one day.

Grala’s circle around the number looks a little odd, but when it’s in white it works better, and the red and orange flames whipping around the bottom really stood out well.

Gilliland’s No. 4 Tundra was in Mobil 1 colors this week, and it looked very solid.

There is no objectively better anthem than the Canadian national anthem

My colleague Michael Finley has good opinions sometimes, and as a general fan of hockey with two sisters in Alberta, I agree here. The melody of “O Canada” is much prettier to listen to and easier to whistle, and very hard for singers to mess up, compared to how often “The Star Spangled Banner” is done in a cringe-worthy manner.

Incredible work by @j66anderson and his crew to get the No. 3 put back together. Took the damaged pieces and hammered them straight, will rebuild the rear back at the shop. @CTMPOfficial pic.twitter.com/KCAR7KGdB3

Jordan Anderson crumpled up the back end of his self-owned No. 3 Silverado during practice on Saturday (Aug. 24), and the underdog group was without a backup. Through the heroic efforts of his crew working most of the night, the truck was ready to roll on Sunday afternoon (Aug. 25), and he picked up a very solid 16th-place result.

JR Motorsports has already started the Dale Earnhardt Jr. countdown, which is understandable, given his profile within the NASCAR scene and the sports world in general.

While the Truck Series is off until Sept. 13 when it returns to Las Vegas Motor Speedway, the Xfinity and Cup Series both take to South Carolina and the egg-shaped Darlington Raceway this weekend as NASCAR celebrates Throwback Weekend, this time honoring the early 1990s.

The Sport Clips Haircuts VFW 200 will be Saturday, Aug. 31 at 4 p.m. ET, with TV coverage on NBC. NASCAR Twitter would explode if Earnhardt could pull into victory lane.

The Bojangles Southern 500 will be Sunday, Sept. 1 at 6 p.m. ET, with TV coverage on the NBC Sports Network. Whoever wins, the throwback paint schemes will steal the show this week, as they should.