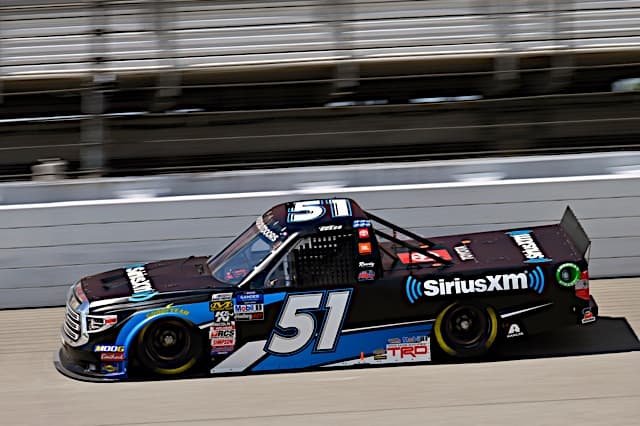 In the first practice session, Chastain paced the field with a fast speed of 185.931 mph. Right behind him was Brett Moffitt. Moffitt wheeled his No. 24 GMS Racing Chevrolet to a speed of 184.649 mph.

Ben Rhodes and Tyler Dippel were third and fourth fastest, respectively. Both drivers have to win the Corrigan Oil 200 in order to make the playoffs.

Fifth quickest was Jordan Anderson. He timed in at 183.899 mph. He finished the session pleased with the speed in his No. 3 Chevrolet.

Another great start to the weekend!

Ended up 5th in 1st Practice. So proud of our group and how hard everyone has been working. Hopefully we can keep it rolling! ?? pic.twitter.com/NTgdkFpoPi

Thirty-one of the 33 drivers entered completed a lap in the opening practice session.

In the second and final practice session, Eckes posted a quick time of 184.233 mph.

Sitting second in this practice was Chastain. He missed leading both practice sessions by 0.006 seconds, but still wheeled his No. 45 Niece Motorsports Chevrolet at 184.204 mph.

Rhodes again was inside the top five, third-fastest in final practice.

Of the nine drivers who ran at least 10 consecutive laps, Eckes also was fastest.

The Truck Series will resume on-track action Saturday (Aug. 10). Qualifying will take place at 9:35 a.m. ET. The Corrigan Oil 200 is scheduled to begin at 1 p.m. ET with TV coverage provided by Fox Sports 1.