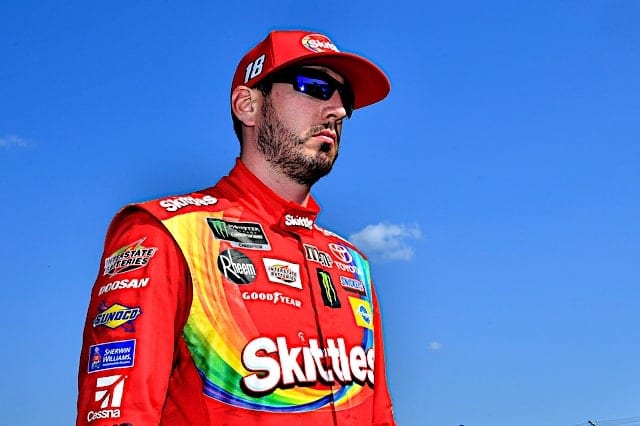 Five months, 1,000 podcasts and one qualifying format change ago, I came to write this monthly column and found my mind wandering to multiple different things. NASCAR’s 2019 rules package was fresh on everyone’s mind, a few standout teams were dominating the series and others were quietly establishing themselves as contenders. I commemorated the occasion with a piece highlighting four takeaways from the 2019 rules package’s debut month.

In the time since both the spring and summer break have come and gone for most students, parents and teachers. NASCAR’s thrown PJ1 on tracks, endured occasional aero criticism and enjoyed a spattering of classic finishes. Contenders have risen and fallen, and initial discussions about 2020 have begun to take place.

Before the playoffs approach and mentalities shift to crowning a champion, I thought it would be fun to take a look back at the four takeaways from the spring and compare them to now. So without further adieu:

Still true? Yes… and no.

When the first races of NASCAR’s rules package came about, fans watched, eagerly hoping for passing aplenty and massive runs in the draft. What they were treated to instead were long, caution-free runs — albeit following restarts that were often chaotic and entertaining.

Fast forward to now, and things haven’t completely changed. Drivers are still frustrated with the wall of air that seems to entrap their cars behind competitors as they near the front of the field — just ask Martin Truex Jr., who followed Chase Elliott for what must have felt like an eternity last Sunday in hopes of a mistake, pesky lapped car or act of God to allow him a way by the young star.

Green-flag runs occasionally trend long, and when they do, the field still tends to get spread out and run single file. Track position often matters more than fresh rubber, and it can be challenging for a team to make up lost ground if they’re trapped in the wrong lane on a restart.

But hidden amid the mix of negativity are a few causes for optimism.

First, it must be said: There have been a recent slew of good finishes in the Monster Energy NASCAR Cup Series. Alex Bowman‘s recovery to pass Kyle Larson for his first win, Kurt Busch‘s fierce battle with brother Kyle Busch and Kevin Harvick‘s survived bump-and-run attempt from Denny Hamlin were all moments of classic NASCAR action. Each of them proved instantly memorable, giving the sport a jolt of energy and adding some marketing fodder for ensuing years.

There have also been moments of genuine, raw emotion. Bubba Wallace exhibited tears after racing his way into the All-Star Race and bravado after dumping boss-turned-rival Kyle Busch last weekend at Watkins Glen International. Daniel Suarez held his own in a pit lane skirmish with Michael McDowell. William Byron let out his anger (and destroyed his car) hitting Busch under a stage break, and the typically reserved Jimmie Johnson called out a supposedly “quivering” Ryan Blaney in the same race.

Perhaps most important for this package, there have also been more crashes. Races following the spring trip to Auto Club Speedway have had nearly two more cautions per race (6.94) than those in the first four races of the 2019 package (five). Incidents keep the field bunched up, allowing for shorter runs that seem to be where the draft package shines brightest.

It’s hard to predict whether the good finishes or drama will continue into the postseason. But thus far this package seems to be slowly trending in the right direction — as far as entertainment is concerned, anyway.

Kyle Busch has been arguably the best driver in the Cup Series this season. The 2015 champion has four victories, leads the point standings post-Watkins Glen and has yet to suffer a DNF in 22 races.

But unlike in March, Busch looks to be beatable with the playoffs approaching.

At the time of the first takeaways column, Busch was a leap above his competitors. He’d won back-to-back races, had an average finish of 2.6 in five starts and came within one teammate overtake of his first Daytona 500 win. Busch had a 15-point edge on the field and was already up to a double-digit playoff point total.

His momentum has since slowed, even if the consistency is still there. The Nevadan has 11 top fives and 18 top 10s in 22 starts but has won just two additional times in the past 17 races. That’s opened up the door for Team Penske’s Brad Keselowski (three wins) and Joe Gibbs Racing teammates Truex (four) and Hamlin (three) to close the gap to Busch in victories and playoff points, while Joey Logano has challenged him for the regular season title.

Is Rowdy still likely to make the Championship 4? Absolutely. He’s in position to enter the postseason with 43 playoff points as things stand, giving him nearly a full race’s advantage on most of the field.

But Busch isn’t the de facto championship favorite he was during the spring.

During the early stretch of the season, a few dark horse contenders began to make their presence known at the front of the field. Kurt Busch showed strong pace for a No. 1 team that had previously floundered in the back half of the top 15. Aric Almirola was among the most consistent drivers on the tour, and drivers like Ricky Stenhouse Jr. and Austin Dillon had shown flashes of potential despite an overall lack of consistency.

Many of those contenders have since proven to be pretenders. But a small smattering remain distant threats.

The most obvious early season dark horse that’s stayed relevant is Busch. The inaugural playoffs champion’s initial belief in Chip Ganassi Racing has proven justified. Busch has five top fives and 12 top 10s through 22 races and has even broken through for a trip to victory lane at Kentucky Speedway. That streak’s been impressive given the No. 1 team’s lack of true playoff relevance outside of the first round over the past five years.

Almirola’s early strength has faded slightly over the spring and summer, but the Floridian remains a distant threat for a postseason run. He sits ninth in the championship standings, second only to Harvick at Stewart-Haas Racing. Almirola is the top driver without a win this year but has managed to keep his season float with consistency. If SHR can find the necessary pace to contend down the stretch, he could prove a contender.

As for the other early seasons surprises… well, let’s just say they weren’t a sign of things to come.

Stenhouse’s early contention fell apart over the spring, setting in motion a slide from seventh in the standings to 20th at the time of writing. Nothing short of a victory will elevate the Mississippian into the postseason, and of the remaining tracks only Bristol Motor Speedway seems to be a place where that may occur.

Richard Childress Racing has continued to have moments of brilliance, with rookie Daniel Hemric notching a top five at Talladega Superspeedway and a seventh-place effort at Pocono Raceway. But neither Hemric nor Dillon has proven fast enough for a win or consistent enough to make the Round of 16 on points. Dillon leads the pair in 22nd entering Michigan International Speedway, while Hemric sits back in 25th.

Still true?  No, at least not entirely

One thing was certain when the Cup Series rolled into a racetrack each week this spring: either a Ford or a Toyota was going to victory lane.

That’s not true anymore, but it is still likely.

Chevrolet entered the year with nine straight losses before Elliott’s win at Talladega,  but the Bowtie brand steadily built its teams up as the temperatures kept rising, That rise paid off in July as the manufacturer won three straight races with Bowman, Justin Haley and Kurt Busch, and again last weekend as Elliott scored his second victory at Watkins Glen.

That gives Chevy four wins in the past six races heading to Michigan, providing cause for optimism among the Bowtie faithful with the playoffs drawing near. But not all is necessarily well just yet.

While Chevy’s recent burst of wins is undeniable, many of them lack relevance for the playoffs. Haley’s was a rain-shortened fluke called brilliantly by his Spire Motorsports team. Elliott’s came on a road course, and one largely unlike the Charlotte Motor Speedway ROVAL that looms in October. Busch’s victory occurred on a intermediate oval but was only possible after a late caution shook up the field.

Only Bowman’s victory at Chicagoland Speedway came at a playoff-relevant track without appearing lost before a situation in the closing laps.

That’s doesn’t discredit the Bowties. Its organizations made the most of each circumstance to secure wins that help the brand and, outside of Haley, each team’s postseason effort this fall.

But without showing more front-running oval pace like Bowman and Larson managed at Chicagoland, Chevrolet will continue to be at least a slight underdog this fall against the powerhouse teams at Toyota and Ford.

I still think Busch is the one to beat. The gap is not near as large but he and the team need to stop racing like the Detroit Lions! <- haha sports comparison of the day.