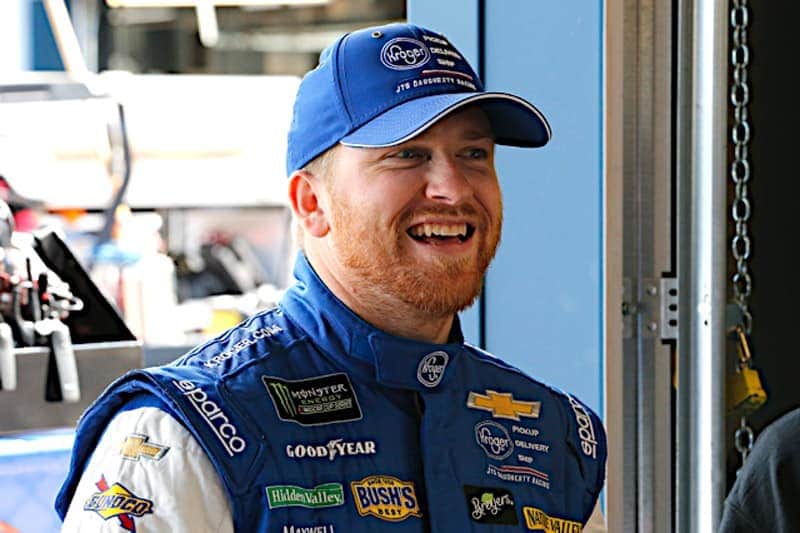 Chris Buescher has been the model of consistency in the Monster Energy NASCAR Cup Series since May.

No, his No. 37 Chevrolet for JTG Daugherty Racing isn’t in the limelight of the top five. In fact, outside of a lap led at Daytona one month ago, Buescher’s only time spent at the head of the pack came in May at Kansas Speedway, where he led 10 laps.

Don’t let that fool you into thinking his talent has gone to waste.

From Kansas forward, Buescher has managed to finish 18th or better in each of those 11 races, the longest streak of top 20s in JTG’s history.

Consider the wide variety of tracks the Cup Series has visited in that time: Two road courses, a superspeedway, two trips to Pocono — where he got his first win three years ago — five mile-and-a-half tracks, plus Michigan and New Hampshire. Not once has Buescher or his No. 37  team crumbled.

In his third year with JTG Daugherty Racing, the 2015 NASCAR Xfinity Series champion seems to be finding his stride through the chemistry he and his team have built after a disappointing start to his tenure.

“You start with going back and trying to build a second team from scratch,” Buescher said Saturday (Aug. 3) at Watkins Glen International. “It was a lot of work early on. I felt the chemistry within the team is really tough. We’ve hit on a lot there, now, that everybody works really well together.

“We are able to get those results weekly at this point and we’ve gotten rid of a lot of inconsistencies. We’ve been able to still take those high weekends and for the most part, capitalize on them. That’s a big part of it.”

According to the championship standings, that trade-off has worked well. Buescher sits 21st in points, ahead of any RCR or RCR-affiliated team with just four races left in the regular season.

Sitting 81 points below the bubble, the likelihood of making the playoffs remains realistically slim for Buescher, barring a win at Michigan, Bristol, Darlington or Indianapolis.

Buescher, though, likes his chances at the high-speed, high banks of Bristol in two weeks, even despite a 22nd-place effort in March.

“I look at Bristol every time we go as an opportunity for us to go get a win,” Buescher added, whose best Bristol finish of fifth came in 2016 for Front Row Motorsports. “Earlier in the season, we went to Bristol and ran really well. We were right there with Kurt [Busch] a lot of that race and he ended up winning the thing.

“I definitely feel like that’s a place we look at as an opportunity to win.”

Buescher doesn’t kid himself — he knows that despite the obvious improvement from 2018 to now, work remains to be done to be a legitimate Cup Series contender week in and week out.

But he also sees what’s working directly in front of him.

“There are just a lot of things that have all come into play,” Buescher said. “We’re starting to put all the puzzle pieces together to be able to capitalize on it. We’re not where we want to be. You want to be winning races every weekend.

“But when we looked at our expectations at the beginning of the season, we thought that if we could run top 15 for the majority of the weekends, that would be big for us. And we’ve been able to get really darn good close to that and be right around that 15th spot a lot.”

Through 22 races, Buescher has already amassed four top 10s, equaling his career-high in 2017.

“There are a lot of good things,” he said. “There’s plenty to do yet, but it’s been a really good start this season and a really good last few months. We’re having fun with it and things are clicking right now.”

Fun is important, but so is stability. Buescher seems to have found that on the racetrack.

What about away from the pavement?

That’s where the questions continue to rise, with growing speculation that Buescher may not return to JTG Daugherty Racing in 2020.

If the ball is in the race team’s hands, the move to not bring a driver like Buescher back seems short-sighted at best. In equipment finally worthy of regularly competing for top-15 finishes, Buescher has delivered on most weeks, particularly through this extraordinary stretch of 11 races.

The results have been there. Why not, then, is the contract?

For his own sake, Buescher isn’t worrying much about that. Instead, he’d rather focus on what’s worked so far.

“You know that certain things have to fall into place, so it’s not something that just hit us all of a sudden and takes your mind away from things,” Buescher said. “Everything is not set in place yet. We’re working toward it and I’d say we’re getting close, and that’s nice to know.

“But at this time, it’s what it’s been for a while. It’s not inked on paper yet. It’s not done. All we know to do is to go to the track and do our best and get the results. The rest of that stuff kind of falls into place.”

With NASCAR heading to the Irish Hills of Michigan this weekend, Buescher has had previous success at the track. The Texan native has four top 20s in seven starts.