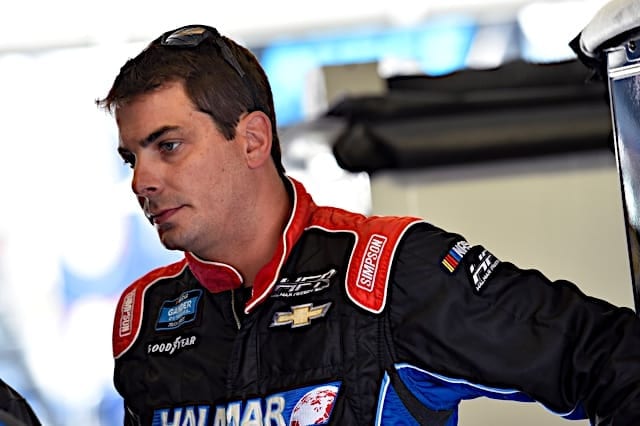 Heading into Saturday’s (July 27) Gander RV 150 at Pocono Raceway, Stewart Friesen was one of the pre-race favorites for the win. By the end of first corner on the first lap, his shot of earning his first Gander Outdoors Truck Series victory was crushed.

Friesen began the 150-mile race from third position, only behind Austin Hill and Ross Chastain. But heading into turn 1, Friesen’s race was over, as the No. 52 Chevrolet got loose underneath Sheldon Creed, turning into the outside wall before getting smacked by Anthony Alfredo.

“We got spun around and made contact with the wall,” Friesen said after the wreck. “Just a bummer. Got on the apron and it went around. I had a lot of friends and family here today, and I wish I could have done more. …We’ll be back, it just sucks right now.”

Friesen was hoping to get to the inside of Hill heading into turn 1. But the driver of the No. 52 knew he was going to get blocked, putting him in a bad position.

“I expected the [No.] 16 to block, that’s what he does,” Friesen added. “He moved down to block and I tried to get up behind him and Sheldon [Creed] was on the outside. I’m not going to post blame on anybody, it’s just racing. I should have flexed my elbows out a little bit more and used some more racetrack to not clip the apron. I clipped it and went around.”

The Truck Series makes its annual visit to Eldora Speedway next Thursday (Aug. 1), a track at which Friesen, once again, will be a heavy favorite due to his dirt racing experience. In three truck starts at the track, the Canadian has a best finish of second (2017).

As for the championship battle, Friesen entered Pocono second in the overall standings, but seventh on the playoff grid, 60 points above the cutline. Because of his last-place finish, the No. 52 team earns just one point.

“It sucks,” Friesen said. “I don’t even know how to put it into words, it’s that frustrating. … We’ll just go race as hard as we can. Whatever happens, happens. We’ll try as hard as we can to win a race.”

Heading to Eldora, Friesen is just 13 points above the cutline. In 2018, the No. 52 team had finishes of third and eighth at the next two tracks on the schedule (Eldora and Michigan International Speedway) to close out the regular season.

This crash on the first lap for Stewart Friesen will take several weeks for him to get over. Worst case, this will send him down, like a snowball going down hill, perpetuating itself every week. He will need some good luck to stop this downward spiral.

DeRue O'Loughlin
Reply to  Tom B

Guess you were wrong