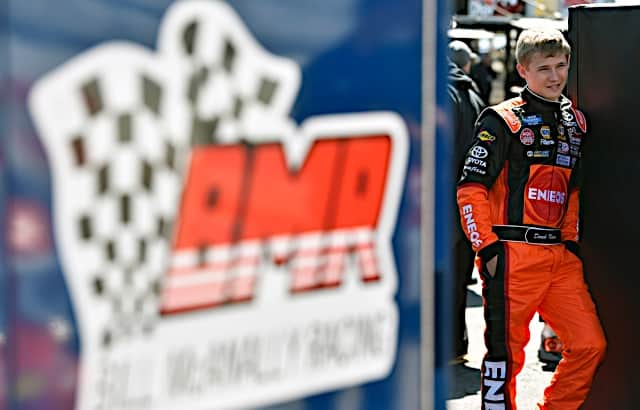 The talk surrounding 2019 K&N Pro Series season has been largely dominated by Hailie Deegan. And for good reason.

She’s young, she’s got a vibrant, no BS personality, has a large social media following–and by the way, can drive the wheels off a racecar. She kicked off the season out West with a last-lap pass on Jagger Jones in Las Vegas on dirt, a surface she’s grown up with, and showed she meant business with a last-lap dump of her teammate at Colorado.

She’s won three times in her K&N career, all coming on last lap passes. She’s a championship threat this season, only eight markers back of the lead, and has been dubbed as a possible ~savior~ of the sport given her marketability.

Nobody’s talking about that teammate who got dumped.

He’s not as “out there” on social media, he’s not going to rough you up for a victory time after time and frankly, he’s not “unique” in any specific way. He’s in Deegan’s shadow … to some. But to others, he’s blazing his own trail, one of historical proportions.

His name is Derek Kraus, and you probably should start paying attention to what he’s doing.

The 17-year-old Stratford, Wisconsin native currently leads both the K&N East and K&N West points standings. The halfway point has come and gone for both series.

He’s a legit threat to win both championships. That’s never been done before.

Todd Gilliland came oh so close in 2017, only to have a tire failure at the East season finale at Dover derail his quest for both titles. He closed it out on the West coast, winning his second title for Bill McAnally Racing in the No. 16 NAPA Toyota, while Harrison Burton took the East crown.

Kraus is attempting the same feat, with the same team, in the same car a mere two years later.

But the path isn’t 100 percent set in stone, and this wasn’t even part of the plan when the season began. Kraus and BMR had previously agreed to run the bigger East races (New Smyrna, Bristol, New Hampshire and Dover, among others) while focusing on the West championship, running a full season for the third consecutive year.

Kraus won the season opener at New Smyrna, kicking his 2019 off with a bang. He followed that up with a sixth-place run at Las Vegas to kick off the West season and another sixth at Bristol. He then went to South Boston and won the second Twin 100, swept both Twin 100s at Tucson Speedway in Arizona and led flag-to-flag in Oregon.

In 13 races this season, he’s won five times and finished outside the top 10 only once. That came at Sonoma, where he was sent spinning in the esses on the final lap after overcoming a three-lap deficit because of engine issues. However, his best performance may have came this past weekend in New Hampshire.

The No. 16 team qualified ninth, uncharacteristically off the pace, and wasn’t quick in either practice session. But as Kraus, his crew chief John Camilleri and the team always do, they somehow found themselves in the top five and the lead around the mid-point of the race.

They wound up leading 10 laps and finished third, holding their two-point championship lead over GMS Racing’s Sam Mayer. Heading into Iowa Speedway this weekend, the first of two combination events for the K&N Pro Series, more points are available to gain … or lose.

Team owner Bill McAnally has been non-committal on whether or not Kraus will run the full East season along with his West schedule, but has said as long as the teenager is on top of the points standings, they’ll keep on trucking.

But even if Kraus loses the lead, it’d be a crime to not go for it. He’s won three times at Kern County Raceway Park in Bakersfield, California and won last season’s second combo race at Worldwide Technology Raceway at Gateway. Those have both yet to occur this season, but you can bet Kraus is waiting for them.

The kid may still be in high school, but he’s not just another one of these young drivers to come through the ranks, light it up in K&N and flame out.

He’s the real deal, and could be on the precipice of NASCAR history. It’s about time we start paying attention.

This kid has proven that, unlike Ms Deagan, he can pass on the outside.

Should pay more attention to DK rather than smart mouth Hallie D. She wins by dumping others. Derek Kraus is the real deal.

I agree he’s going a long way in Nascar far from done!????