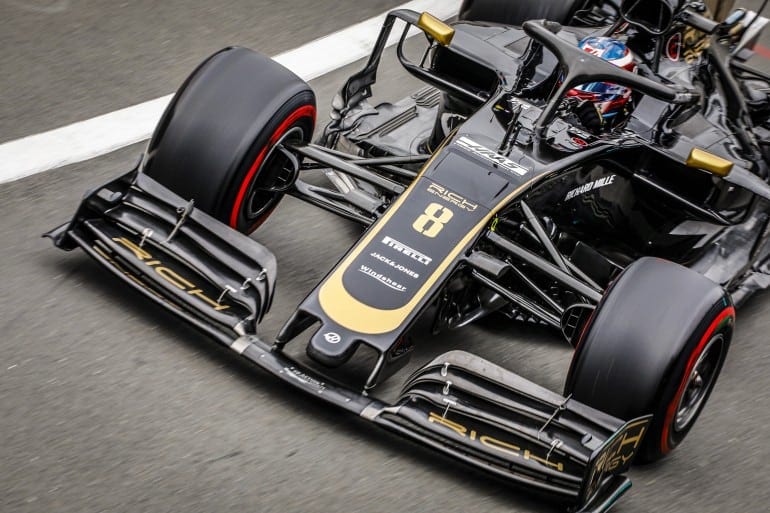 This past Sunday brought a fair amount of drama from Silverstone as Lewis Hamilton earned his sixth British Grand Prix victory and Sebastian Vettel continued his tour de force implosion when he rear-ended Max Verstappen and took himself out of the points. The battles from the third position through 14th gave glimpses of wonderful competition and saw a tightening between Renault and McLaren.

With the usual suspects at the front — Mercedes, Ferrari and Red Bull — the midfield has again become one of the more interesting battles. Missing from the fray, however, is a team that has hovered in this terrain for the past few seasons. And yet this year, they can rarely be found.

When Haas F1 began racing in 2016, their incipience caused quite a stir. Banging out a sixth-place finish in Australia may have set an unreasonable bar of expectations for the Ferrari-related outfit. But when Romain Grosjean backed his effort with a fifth at the second race in Bahrain, things certainly looked good for the upstart American organization.

That he earned two more points-paying finishes and hovered around 10th all year long was a testament to how good they might be. While his partner, Esteban Gutierrez, struggled with a best finish of 11th (four times), the team had reason to believe that they could start setting their sights on teams near the front of the grid.

In 2017, Haas F1 ditched Guitierrez and brought Kevin Magnussen on board, and the results were mixed. The team finished in the same spot in the standings as the previous year, eighth, but Magnussen had five points finishes and Grosjean eight. The organization had a right to feel optimistic as to their future, sensing that with Ferrari improving their powerplant that they would surely benefit and rise.

Indeed, that sense showed up in 2018 when the team finished fifth in the standings. Even with both cars being disqualified once each, and seven retirements between them, the team looked to be solidly in contention to move up. Magnussen ended the year with 11 points finishes while Grosjean clocked seven of them. The cliche that seems appropriate here would be that things seemed rosy.

But now, in 2019, Haas F1 is going through a season where they look like a rudderless ship or a car with no steering wheel. To that effect, they have done a good job wrecking equipment — including each other’s as evidenced by this past weekend when Grosjean and Magnussen got together in the early laps at the British GP, and after attempting to run once they pitted, both ended their races by lap 12.

Throw in the fact that through 10 races, the two drivers have just four points finishes with the highest being Magnussen’s sixth in Australia, and things are not only trending in the wrong direction, they are looking a little bleak.

To say that they have taken a step back is a bit too easy of a way to summarize things. As usual, it is more complicated than that.

To begin, this year’s car iteration, the VF-19 struggles with the Pirelli tyres like no other ride in the paddock. Haas has struggled all season to get the car to hook up but have yet to find what will make things work. The on-track results show this difficulty, and there’s little reason to think that things will improve in a significant fashion this year.

Aside from the engineering element, Haas have also been engaged in one of the more comical sponsor entanglements in recent memory. Rich Energy Drinks had signed on at the beginning of the season, but there is little reason to believe that they have their proverbial ducks in a row. That the company actually had little in the way of assets and has struggled to actually produce its energy drink has led some to consider them a shell company. Whether or not this aspect is correct, something is not right.

This notion was confirmed this past week when then-current but now former CEO William Storey started a rumor that the relationship between Haas and Rich Energy had ended. Then, after both drivers crashed out, Storey antagonistically tweeted at the race team.

The story grew more complicated on Tuesday, when the board forced Storey out, rebranded the drink Lightning Volt, and sought to continue as things were. But Haas is countering with a breach of contract.The whole tale is a goofy and questionable one, and some might say that it should not affect on-track performance, but if the team has not been getting paid and their sponsor has become an issue, then the matter becomes one that seeps into everyone’s state of mind.

Then there is a different matter. While Haas had been holding down a pleasant spot in the midfield, a couple of teams started putting together better efforts. One of those teams has been a notable success story this year, as McLaren is finally looking like they know how to race again. The other team comes as a bit of a surprise as they are often overlooked by their big sister, but Toro Rosso with their improved Honda powerplant have raced rather steady this year. That means that Haas may not have fallen so terribly off as much as others have gotten much better.

If you want to debate as to whether Grosjean and/or Magnussen deserve their rides, go for it. Right now, however, there’s enough going on to push that argument to the side and instead wonder whether Haas can find a way to right the ship.

It might be easy to think they could, but they are struggling in NASCAR as well, with zero wins but a much more disappointing tally of just 13 top fives between their four drivers. With the season past the halfway point, it is not difficult to see that the NASCAR operation is suffering as well as last year the four drivers totaled 42 top fives.

There’s reason to be concerned with Haas. Finding out which side of the company turns things around first may be a particularly fascinating story for the second half of the racing season.

Nice story Ava. Finally someone has asked the obvious questions. Maybe we will get some answers. One bit of news is the new branding of the energy drink. Will the car have LIGHTNING VOLT replacing Rich Energy? Is Guenther Steiner’s job in trouble? Maybe they need Tony Stewart to inject some winning spirit.

David Edwards
Reply to  Tom B

I was with you Tom B until you got to the Tony Stewart thing. I doubt that a cheerleader is what they need, or for that matter someone who knows nothing about the engineering side of F1 thinking they can come in and clean house and make a difference.