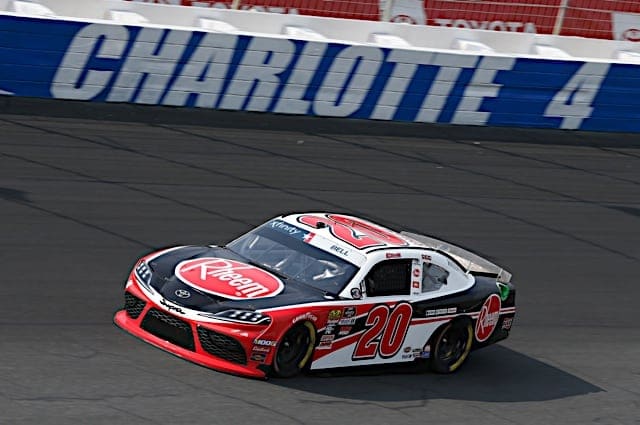 ONE: Charlotte Motor Speedway Battles Back

NASCAR may have been created in some smoke-filled meetings down in Daytona Beach but make no mistake: Charlotte is now stock car racing’s home base. Every major team has its race shop in the area, along with a core group of the sport’s operating staff paired with the NASCAR Hall of Fame.

Their presence adds up to extra importance placed on Charlotte Motor Speedway to be an elite racetrack. For decades, it lived up to the billing; the Coca-Cola 600 was part of the Winston Million program, listed as one of the sport’s crown jewel events. Drivers from Jeff Gordon to Bobby Labonte earned their first victories here in the sport’s longest race, all to great fanfare. The week before it, NASCAR’s All-Star showcase cemented its place here with a long list of fantastic finishes.

But all that goodwill seemed dashed to pieces as recently as two years back. Some yawn-inducing dominance by Martin Truex Jr. left fans frustrated, the low point after a decade-plus of Charlotte dysfunction. From a levitation project on the asphalt gone bad to NASCAR’s aerodynamic problems, the track had slowly become a shell of its former self. Truex’s 392 laps led in his 600-mile win back in 2016 seemed the final straw; by 2017, fans were clamoring for change in the form of empty seats.

But think about what’s happened in the past two years alone. May 2018 produced the best All-Star Race in years, the type of experimental performance that led to the sport’s new handling package. Track owner Marcus Smith’s bold move to turn the track into an infield road course for the fall paid off in spades. It was easily the most memorable race of the playoffs and one of the few last seasons to spark an increase in attendance and TV viewership.

Then there was Sunday, a Coca-Cola 600 unlike any we’ve seen in decades. A total of 30 lead changes was the most since 2014, but it was the quality of the racing, front to back, that was so impressive. NASCAR’s new handling package came into its own right where it all began, producing three and four-wide passing and ferocious battles on every restart.

Tire drama mixed with Truex bouncing back like Teflon, recovering from a bout with the outside wall to power his way back to the front. The final restart was a frantic dash where a half-dozen drivers could have won and you wouldn’t have raised an eyebrow. Back with Truex or even Kyle Busch in May 2018, you wondered if six drivers would even finish on the lead lap.

For once, the 600 also kept pace with an Indy 500 that’s seen an uptick in crowds and competitiveness in recent years. The early returns posted an open-wheel victory on paper; a 3.9 rating for Indy was its best since 2016 and it trounced NASCAR’s 2.6. But stock car racing should truly be celebrating an eight percent year-over-year increase of its own. For the first time in years, this race produced in front of a hometown crowd.

Charlotte, once again, is becoming a place where people want to show up and race.

TWO: The Big Three? More Like The Big Two

It was a night of comers and goers at Charlotte. But despite a whopping 11 leaders, Truex’s victory meant the number of Monster Energy NASCAR Cup Series winners this season remained stuck at six.

Perhaps the bigger number, though, is 12-for-13. That’s the current win total for Roger Penske and Joe Gibbs’ two teams at the halfway point in the regular season. Chase Elliott is the only driver to break the deadlock, pushing through at Talladega Superspeedway, which brings parity to all 40 cars in the field.

So while it was nice to see NASCAR’s handling package come around in recent weeks, there’s still a clear group of title favorites. Right now, the four standouts appear to be Truex (three wins), Kyle Busch (winning everything everywhere), 2018 champ Joey Logano (one win) and Brad Keselowski (three wins). Daytona 500 Denny Hamlin feels like a strong fifth who can play spoiler if he plays his cards right.

Who else would you slot into this group? Elliott? A winless Kevin Harvick? It’s clear at this point, despite closer racing, the rest of the grid has some catching up to do. Already, each driver in that Penske-Gibbs quintet has accumulated 10 or more playoff points.

The one bright spot to break the Penske-Gibbs juggernaut may be coming from Chevrolet. Hendrick Motorsports placed all four of its cars inside the top 10 at Charlotte, a feat that used to be not all that surprising for the equivalent of the sport’s New York Yankees.

But would you believe that’s the first time they’ve done it thus far in 2019? In fact, it’s the first time the team has done so since the spring Texas race in 2016. That’s how far behind Goliath has fallen. It’s been a slow build back where the fast speed of qualifying (the team leads the sport with five poles) is finally beginning to translate into race trim.

William Byron, in particular, was impressive Sunday night (May 26). Despite a race where tire wear became a central problem, Byron kept his nose clean and his car in one piece. Crew chief Chad Knaus is doing a great job at coaching this 21-year-old through a whole race to limit his DNF total; Byron has just one through 13 races compared to nine as a rookie last season.

Jimmie Johnson, meanwhile, appears to be improving communication with crew chief Kevin Meendering. Alex Bowman is one of the hottest drivers on the circuit after three runner-up finishes faded slightly to a seventh at Charlotte; Elliott has a win and 278 laps led in the last four races alone.

Will it be enough to overtake Gibbs and Penske? Not yet. But it’s notable all four HMS teams are back in playoff position if the season ended today. Suddenly, Chevrolets make up six of the 16 spots and once you qualify, all bets are off as we saw with Logano’s rise to the title last year.

The sport’s longest race gave some longshots a chance to stand out. Chris Buescher, earning a sixth for JTG Daugherty Racing, did so even though his car bounced off the wall early in the race. He’s now got back-to-back top-10 finishes for the first time in his four-year MENCS career. The fact Buescher is within striking distance (55 points) of a playoff spot is a minor miracle considering how badly JTG has lagged behind the major teams through the years.

Corey LaJoie is another driver getting his act together. A 12th at Charlotte was his second top-15 result in the past four races; he’s gelling with a Go Fas Racing team that offers him the best underfunded equipment he’s ever had. After 12 DNFs the first two seasons of his Cup career, Lajoie has just one thus far in 2019.

And then there’s rookie Matt Tifft, invisible this year behind the new third team at Front Row Motorsports. But a 20th not only tied his best-career finish, it made him the highest-placing rookie, a feat he hasn’t accomplished all that often this year. Underfunded FRM did well as a whole with all three cars finishing the race 22nd or better.

Many fans still groan about the NASCAR Playoff system. But it certainly hasn’t helped, in recent years, that the field seemed already set months ahead of time. For example, the top 16 seeds after 13 races last year were the ones who ultimately made the cut. Following last year’s Coca-Cola 600, just two drivers (Ricky Stenhouse Jr. and Paul Menard) were within 50 points of the final spot.

But that’s not the case at all this year as the battle for 16th looks hot and heavy. Kyle Larson holds the spot by just two points over Erik Jones; four other drivers are within striking distance (27 points or less). And did I mention the Jones-Larson duo could lead the Silly Season conversation if they miss the postseason? It’s a more pressure-packed group than in previous years.

Two of the drivers above Larson in the standings, Byron and Daniel Suarez, have also never made the playoffs before. There’s no guarantee they’ll stay in position with veterans like Ryan Newman sitting just outside the top 16.

Even drivers further back, in the “win to get in” category have shown signs they’re capable of running up front. We talked about Buescher’s recent surge; Ty Dillon‘s already won two stages this season. David Ragan was leading the field to the final restart at Charlotte before fading to 15th. Rookie Ryan Preece showed surprising strength at Daytona.

It all adds up to a potential regular-season finale that actually matters. None of these guys are likely to win the Brickyard 400 at Indianapolis, but if a few playoff spots are up for grabs? That can only lead to better racing at a track badly in need of better stock car support.

The ‘playoff push’ only matters if you think that is a legit way to crown a champ. For many fans, me being one, it doesn’t matter at all. I will never be able to equate a 10 race, ‘win and you’re in’, as the same as one that had to be good for an entire season. Just isn’t the same, no no amount of trying will convince me that prretending that there aren’t 40 cars on the track every race makes a ‘playoff’.

Agree 100%.
The best and most logical way to determine the champion in a 36 event season where all participants compete against each other in every event, is a season long system where every race is given equal weight. This method has the highest probability of rewarding the most deserving driver the championship. You can make wins worth more or cutoff points after a certain position or just use the current point system, it doesn’t matter as long as each event is given equal weight. Any system that does not has a higher probability of awarding the championship to a less deserving driver.

I put more weight on the “regular season” champion than I do the cup champion anymore. Like good job you won Homestead and the championship? Looks like you just got a massive trophy and check. Dump the playoff system NASCAR, it doesn’t work!

I think there were reasons why the World 600 was a better race this year:

1) The high-downforce/restricted engine package slowed the cars down where they could actually race on the track, rather than previously just having the leader catching clean air after a restart and checking out.
2) The All-Star Race held the week before was exciting & had a popular winner, which got local fans interested in attending the World 600 rather than watching it on TV.
3) An assist to #2 was the weather, though while hot, was good enough for fans to be willing to invest 6-8 hours at the track without fear of a rainout.
4) The final caution was perfectly timed to set up an exciting finish and also took the fuel mileage factor out of play.
5) SMI has returned to the days of Humpy-style showmanship, but without going over-the-top. They kept fans entertained even when the cars weren’t on the track.