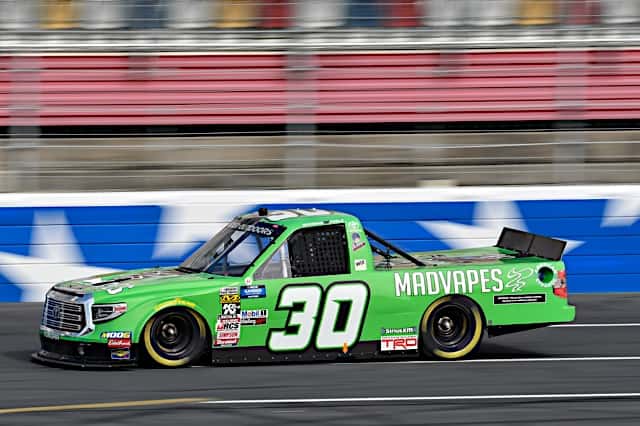 Brennan Poole turned more than a few heads on Friday night (May 17) in the North Carolina Education Lottery 200 at Charlotte Motor Speedway, nearly pulling off a win for his underdog operation, On Point Motorsports.

Poole flashed across the stripe in second place at the checkered flag, his best-career finish in just his 10th ever race in the NASCAR Gander Outdoors Truck Series. The run was his second top 10 of the season, following his ninth-place run at Texas Motor Speedway in March.

Poole, piloting the Steven Lane owned No. 30 Toyota, had no shortage of adversity over the course of the event.

“It was a battle” Poole said after the race. “The sway bar broke before the end of the first stage. The front end was really moving around a lot and the car was unsettled. It really hurt me with lateral grip.”

Poole elaborated on his effort to chase down eventual winner Kyle Busch during the closing laps, particularly after the final restart with three laps remaining.

“I found something on the top side that really helped me later in the race especially on restarts,” he said. “I had a shot at Kyle (Busch). I was pushing him down the backstretch. I probably could’ve pushed him off into three a little bit farther, maybe got him up the track and got a bit better run. I’m just so proud of my MadVapes guys. We’re so extremely underfunded, it’s ridiculous. Just real proud of their effort.”

Poole had to miss last weeks race at Kansas Speedway due to a lack of sponsorship, ending his shot at a championship. If the team can acquire funding, he pilot the No. 30 at Texas on Friday, June 7.

How come they never mention how Brennan Poole lost his top tier ride with Ganassi Racing and his struggle to make it back?