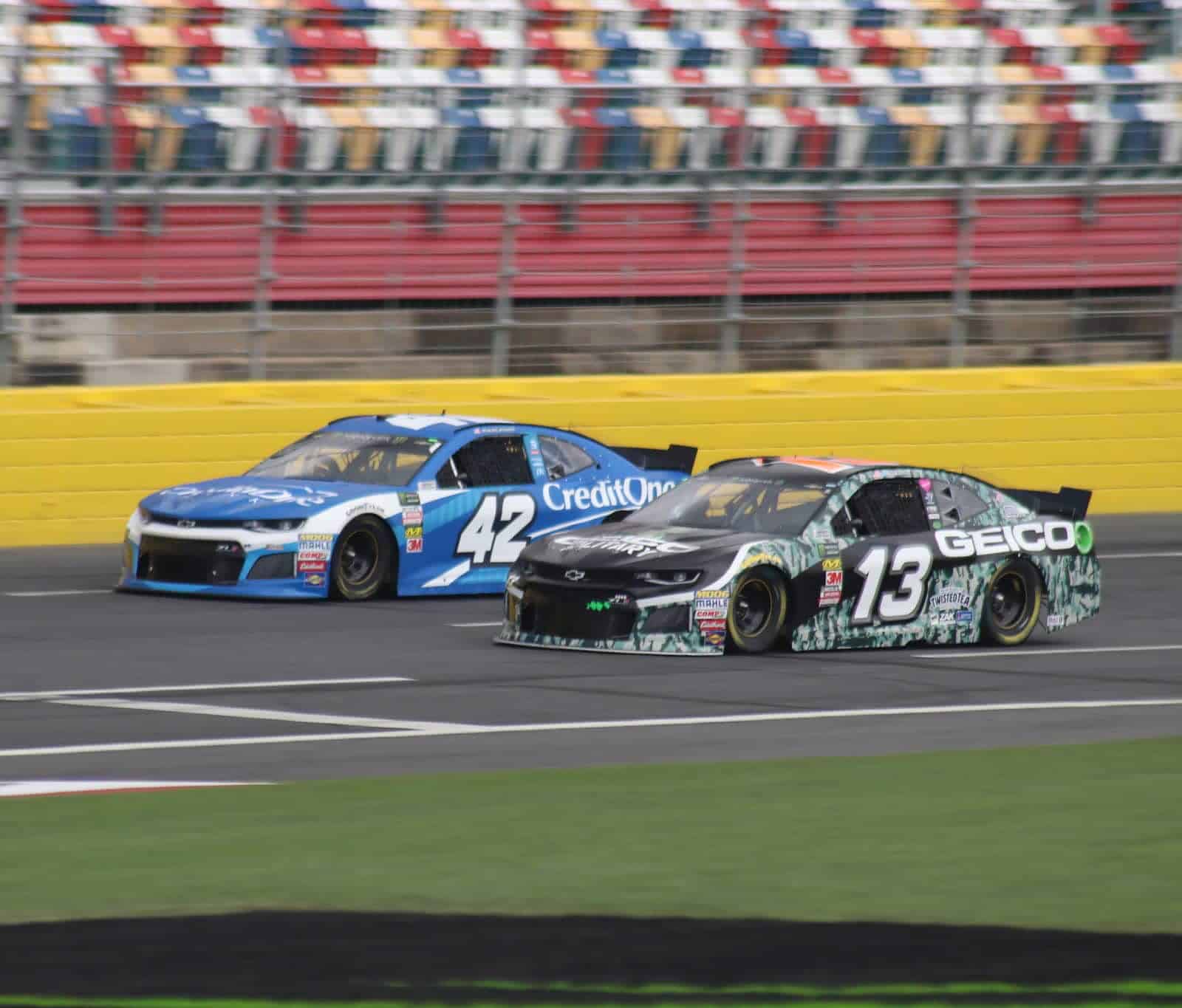 Why is the Monster Energy All-Star Race usually a buzzkill?

An All-Star event in sports is usually a storied affair, the only day of the year where the best of the best share the same field of play at the same time. Baseball’s All-Star Game is one of the biggest sports events of the year, as is basketball’s. It’s a running joke that nobody watches the Pro Bowl, which in itself is always a bad game due to the physical nature of football, but tell that to 8 million people who watched this year’s edition of the game.

Meanwhile, over on the NASCAR side of things, there is an All-Star Race, but it’s not exactly a spectacle in comparison.

The biggest difference between racing and other sports is that all of the best drivers in a given series are all on the same track at the same time, week to week. In other sports, teams game-plan around whoever they are facing that week, but in racing, it’s generally about preparing for the venue. Drivers study other drivers when they get the opportunity in order to better understand how to drive the track, but teams don’t generally try to game-plan against other teams in particular at the level of other sports.

So, an All-Star event in NASCAR is in itself flawed for this simple reason: Every race is already an All-Star race. Why should anybody care about a race where points aren’t on the line and instead of having 40 cars starting, there are just 19?

And these guys aren’t exactly the “best of the best.” I don’t think either driver deserves a spot in the All-Star race this year, but what exactly makes Jimmie Johnson a 2019 All-Star over Alex Bowman? Johnson has not finished better than third in two years now, while Bowman is on a streak of three straight second-place-finishes. But because Johnson won a championship three years ago, he’s automatically in regardless of his results this year and Bowman isn’t, in spite of his results this year.

Just imagine if this were any other sport. In no universe would or should Madison Bumgarner just be in the MLB All-Star Game just because he won a World Series with the Giants in 2014, but in NASCAR, he’d be in the All-Star Race until 2024, as long as he stays active.

Over the past 15 years, the All-Star Race has morphed from a fun exhibition race into a test session for the following week’s Coca-Cola 600, then into a televised rules package test. It used to be that the All-Star Race was the lone race on the calendar that employed double-file restarts. Then double-file restarts were standardized. The All-Star Race used to be the only race with segments, then NASCAR changed the term to “stages” and standardized it across all three national touring series. As much as NASCAR likes to tinker with the rules package for this race, there’s really nothing for more casual fans to sink their teeth into as far as uniqueness.

Finally, the All-Star Race, in general, just seems to be a bit boring. Every third race is good, while the other two are so forgettable it hurts to think about them. Not only that, but following the All-Star Race, there’s really nothing promoting it. I didn’t hear a single announcer last year, in any race following the 600, bring up that Kevin Harvick won the All-Star Race. If NASCAR is going to water the field down, turn the event into just another race, take points out of the equation, then never really promote the winner going forward, why should anybody care about their All-Star event?

So what could be done to fix the All-Star Race?

The All-Star Race can still be salvaged as a concept; it just needs a number of wholesale changes. My own radical idea, one that I’ve been kicking around for years now, is fairly straightforward: put everybody in equal equipment via leased out Legends cars, let them loose in the quarter-mile oval at Charlotte Motor Speedway, and open it up to every winner and defending champion in the three national touring series.

The field of drivers wouldn’t be that big (just 33 fit that criteria since the start of 2018), and can be whittled down to 20 or 15 through heats. It would be a spectacle to behold; imagine watching guys like Christopher Bell or Ross Chastain on the same level of equipment as Kyle Busch or Joey Logano, with 16 other drivers on a quarter-mile flat track in a completely different race car from what they’re used to.

What’s more is that NASCAR can better connect to and promote the Hall of Fame in conjunction with the event. Legends cars are basically a big throwback looks-wise to the race cars of yesteryear, and with the following year’s class already being announced within a week of the All-Star Race as it is, why not have the announcement during a stage break?

It might not be a great idea, but hey, at least it isn’t yeeting an avocado toast off a radiator duct.

Is Richard Petty Motorsports about to close?

Following last week’s column partially on the state of Richard Petty Motorsports, there have been whispers and rumors abound about the one-car Cup team.

Some of these rumors, which are obviously unfounded and unverified, are somewhat alarming. Let’s be clear, however: There is zero chance that the No. 43 team will be missing any race the rest of this year. Absolutely no shot of that. Why? Because the charter that the team holds is worth enough to where somebody will foot the bill.

Remember the circus that was BK Racing in the early parts of last season, where the team kept fielding race cars in spite of little sponsorship? That’s because the only thing of value there was the charter, and acquiring it helped Front Row Motorsports expand this season. The charter system, though a lot of teams have shut down in the years since implementation, has kept 36 cars on the racetrack on any given Sunday, and that won’t be changing anytime soon.

One strange rumor suggests that maybe Petty will be merging or taking on a partner with Andretti Autosport from IndyCar to bring Honda into NASCAR. This isn’t the first time Andretti has been linked to starting a Cup team; rumors persisted in 2012 that Andretti would join NASCAR and take the torch from Team Penske as the sport’s lone Dodge team, but the year came and went with no announcement.

Petty exec also told me this rumor is not true. And Honda says remaining focused on IndyCar and Acura sports-car programs.

What changes could be made to Indianapolis 500 qualifying in the future?

This weekend also features Indianapolis 500 qualifying, one of the most underrated events in all of sports. As 36 drivers battle for 33 spots on the grid next Sunday, one debate that has been raging in open wheel this year has been if anybody should be locked in for the legendary race.

Last year, James Hinchcliffe missed the show, leaving a well-funded, full-time car on the sidelines for the biggest race of the year. This has set off what has now been a year’s worth of debate between the biggest names in open wheel concerning how to determine who gets in, and has led this year to the introduction to the “last row shootout” immediately before the fast nine shootout on Sunday.

A number of owners, most notably Chip Ganassi and Roger Penske, have argued for a return to guaranteed spots. Guaranteed spots, most infamously as part of the 25/8 system (where 25 full-time teams were given automatic entry), was one of the big dividing points in the CART/IRL split in the ’90s, from which open wheel racing in America still hasn’t recovered.

Drivers, on the other hand, think the current “fastest 33” rules should stay in place.

My opinions on guaranteed positions for the #Indy500. ⬇️ While it may not be everyone’s view, things around here are earned and not given. Earn your starting spot, then give yourself a chance to win the greatest race in the world. https://t.co/Rt7lnZD4Ol

There should be a compromise. Too many guaranteed entries make it hard for smaller teams to gain a foothold into the field, even if they qualify as high as 10th, whereas fastest 33 has led to a couple of embarrassing situations over the last few years.

Why not the fastest 30, with the final row being decided by owner points and with qualifying speed used as the points tiebreaker? If a team is going to only run the Indianapolis 500, yet isn’t fast enough to make the fastest 30, they probably shouldn’t be racing. Whereas teams that race every week in this series, the ones that put the miles in throughout the season and commit to the sport, should have a (small) safety net in case something goes wrong the weekend before. Otherwise, why spend the time and money to race full time in a series where being the champion is noticeably less important than winning a single race?

I agree with Graham’s assessment. It’s not special when qualifying only means something for a few backmarkers who don’t have the funds to buy their way in. Why have 3 weeks of track activity leading up to the event just to decide which underfunded team(s) goes home? Those 3 weeks suddenly become ho-hum because there would be no uncertainty, no suspense of who may or might not make it (because all the fan favorites are guaranteed in), no anticipation, chewed nails, nor sighs of relief once your driver finally made the field. Bump Day would become meaningless and mundane.

Love or hate Hinchcliffe, he earned much respect from me last year because I never heard him whine about failing to qualify. Yes, he was disappointed, but he immediately supported those who earned the spot by disagreeing with the groundswell of fan sentiment that HE should be allowed in despite his failure to make it based on the current rules. He owned up to coming up short and I never once heard him say anything that sounded like he felt “entitled” to any of those spots the other drivers earned.

Ol Mike Wallace is pushing the Honda story. He keeps it alive when it dies. Haven’t you been reading, bubba has been super depressed for weeks now, continually crying and whining. Does he really expect the king to ignore what’s happening. Richard isn’t calling the shots, Mr money man is. Richard had enough zeros his last eight years racing, he can’t be liking this.
Perhaps they are putting DW in the car now that his booth time has been yanked away. Y’all didn’t really believe DW would ever walk away from a paid talking big on his own did ya.

I would like the All-Star race to be an invitational race with competitors chosen by vote primarily by team-members and press, with maybe three fan votes thrown in. The invited drives could be limited to 15 or so to keep it exclusive. Uninvited drivers or teams can run the open to make the big event, but only one driver transfers, just like the old days. I would also run the cars unrestricted and with a loosened rule book. Let the teams be creative and take risks. Let underdog teams try something crazy.