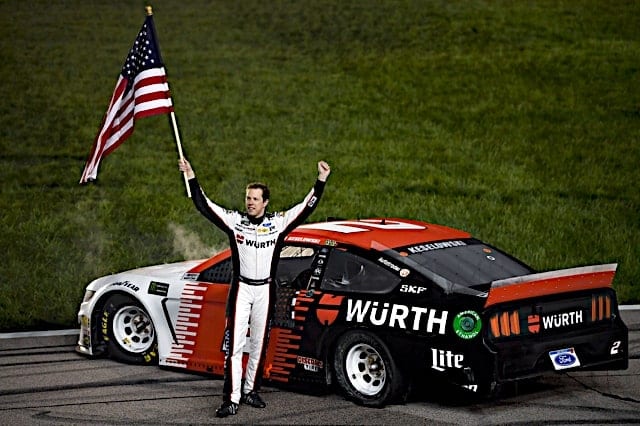 After a wild and entertaining race, Brad Keselowski reigned supreme at Kansas to claim the victory in the Digital Ally 400. Now tying Kyle Busch for most wins this season, will Keselowski outduel Busch in the win column this year?

Kevin Harvick was on track to claim his first victory before a flat tire false alarm derailed his winning chances. Should there be cause for concern that Harvick hasn’t won a race yet despite his competitive performance?

Alex Bowman extended his consecutive runner-up streak to three at Kansas. With such amazing performances, is Bowman beginning to look like Chevrolet’s biggest championship contender?

A rare sight greeted Clint Bowyer at his home town track when Erik Jones knocked the smile right off his face. A win at this week’s Monster Energy All-Star Race can turn the frown upside down for Bowyer, but can he regain his competitiveness?

Questions await as the Monster Energy NASCAR Cup Series stays home in Charlotte this week for the All-Star race. Only time will tell who gets to take home the one million American dollars plus a shiny trophy, but one thing is for sure — there is a cast of characters who will do anything to capture the dough. Despite the contagion of money, the drivers will have to wait a few more days before they get their opportunity. In the meantime, our illustrious squadron of Frontstretch experts took to their calculators, keyboards, thinking caps, crystal balls, and even Adam Cheek’s abacus to determine the 12 best drivers in NASCAR at the current moment. With that, here is Power Rankings Kansas…

For the first time since Las Vegas (yes, that long ago), a driver with a name that starts with B and rhymes with “push” has not sat atop our Frontstrech weekly power rankings. That’s right, Brad Keselowski has dethroned the Candyman for the top spot of the podium for the first time in nine editions of power rankings. As the No. 2 driver himself noted, Keselowski has now crossed the 30 win threshold. Is there such thing as humbly tooting your own horn?

With everything going on, win #30 got lost in my mind. It’s a huge number to me personally & the sport. I try not to be a “stat guy” but If you look at the list of drivers that have 30+ wins. Wow

I feel blessed to have cars & a team even capable to do that it in the cup series. https://t.co/svLhT2NZbj

“As I said last week, Keselowski is in 2012 title form.  He’s proven me right because Carly Rae Jepsen released another song.” – Rob Tiongson, The Podium Finish

On paper, a 30th-place finish at one of his worst statistical tracks shouldn’t be surprising. However, this is Kyle Busch, the driver that is tied for the most wins this season, the most wins in the Gen 6 era, a win at every track on the Monster Energy NASCAR Cup Series Schedule, and tied Morgan Shepherd for the most consecutive top 10s to start a season. Despite the impressive resume, a finish outside the top 25 has relegated the Candyman to the number two spot for this week’s edition.

Yet he looks to win a lot of money in the All-Star race with his new colored paint scheme and firesuit, or as FOX Sport’s Matt Yocum suggests, some preppy yacht club kid apparel (thanks Urban Dictionary for that by the way).

Looks to me like Vinyard Vines designed the firesuit too…? https://t.co/ZOX5AxfrKZ

“That was rude of NASCAR to make him drive through too many pit stalls like that.” – Michael Massie, Frontstretch

Who cares Harvick nearly won his first race of the season? The real story with Happy is that he is becoming cultured. Last week, the 2014 champion was facing a severe existential crisis after millennials took over his car. Yet, Harvick has started to learn that he can’t even. That’s a start.

For Harvick and this post-millennial, millennial lingo can be hard to comprehend, so please, give us time.

When it comes to speaking like a millennial, @KevinHarvick can't even. Watch him learn the #MillennialCar lingo for the #AllStarRace. pic.twitter.com/SflKO3kLN3

“Did someone double check to make sure to see if it was that black cat (or squirrel) again that once ran out in front of him that caused that unscheduled pit stop.” – Zach Gillispie, Frontstretch

Cue the Jaws music, the Chevrolets are coming back.

.@chaseelliott raced his way to a P4 finish to go along with another stage win.

The young driver from Dawsonville is getting it done this season. ? pic.twitter.com/4hUVJK0n0w

“Another top-five which is just as exciting as Elliott’s monotone voice.” – Tiongson

Logano was notably absent from the leaderboard at Kansas. Despite his truancy, Logano crept his way into the points lead, which was largely overshadowed by several events including a 39-year-old getting punked by a 22-year-old, the near overhaul of a roller skating legend’s record, an “exhilarating” aero package, a showman, a piece of trash, Keselowski emulating Mr. Kevin “where did he come from” Harvick, and a watermelon farmer.

“It’s like the Team Penske drivers take turns on who has that good car. Except for Ryan Blaney, they don’t let him have a turn.” – Massie

But shhh!!! This is just a rumor. You didn’t hear it from us.

“MTJ is having a Katy Perry-like season. And by that I mean, a hot and cold one.” – Tiongson

The following sentences each have something in common:

Walmart has a lower acceptance rate than Harvard.

Alex Bowman has three runner-up finishes in a row.

Hunting Unicorns is legal in Michigan.

These are all wildly surprising facts.

I’ve never wanted something so bad. Not going to lie, this one hurts. My team has worked like crazy though to get us to where we’re at, and I’m proud of what we’ve done. Going to keep after it to get that win we deserve ??

You now have the chance too.

Global Poker returns at @kansasspeedway this weekend! This means another chance for YOU to submit your #GlobalPokerFace and enter be featured on the No. 1 @official_glp car this fall @MartinsvilleSwy. ? ♠️ ❤️ ☘️ pic.twitter.com/dtmcozjLwI

“Technically, a record was broken. A Busch has finished in the top 10 in each of the first 12 races. It’s not the Busch brothers’ problem Morgan Shepherd didn’t have a brother to pick up the slack in the 12th race.” – Massie

You’ve probably already heard about Mr. and Mr. Jones. Enough of that. Here is this week’s episode of Clint Bowyer’s social media chronicles…

“He didn’t like that block. Do I smell another spingate in the All-Star race?” – Baskinger

“I like his strategy: get all of the bad luck out of the way now.” – Massie

That block was almost as good as Chuck Norris blocking bullets with his skull.

P3 for our @DEWALTtough team tonight. It was really up and down, but at the end of the day we had a good enough #Camry to win. Just weren’t able to get to the right spot. We ran out of time and ran out of getting the right runs and the right positions. Good day overall. pic.twitter.com/IMmplgMMC7

“Heard he was throwing one hell of a block party.” -Massie

Larson claims his performance at Kansas was decent. Yet, looking at his track record this season, his performance at Kansas was actually outstanding, phenomenal, astonishing, amazing, staggering, miraculous, unheard of, sensational, breathtaking, insane, astounding, incredible (where are you Kyle Petty), unparalleled, awesome, terrific, tremendous, super and any other synonym for pretty good.

Decent run for us yesterday. Nice to get another top 10 for @CreditOneBank @TeamChevy

“I guess he needs to flip every weekend to actually do good. He should just think about entering more sprint car races just to flip.” – Baskinger