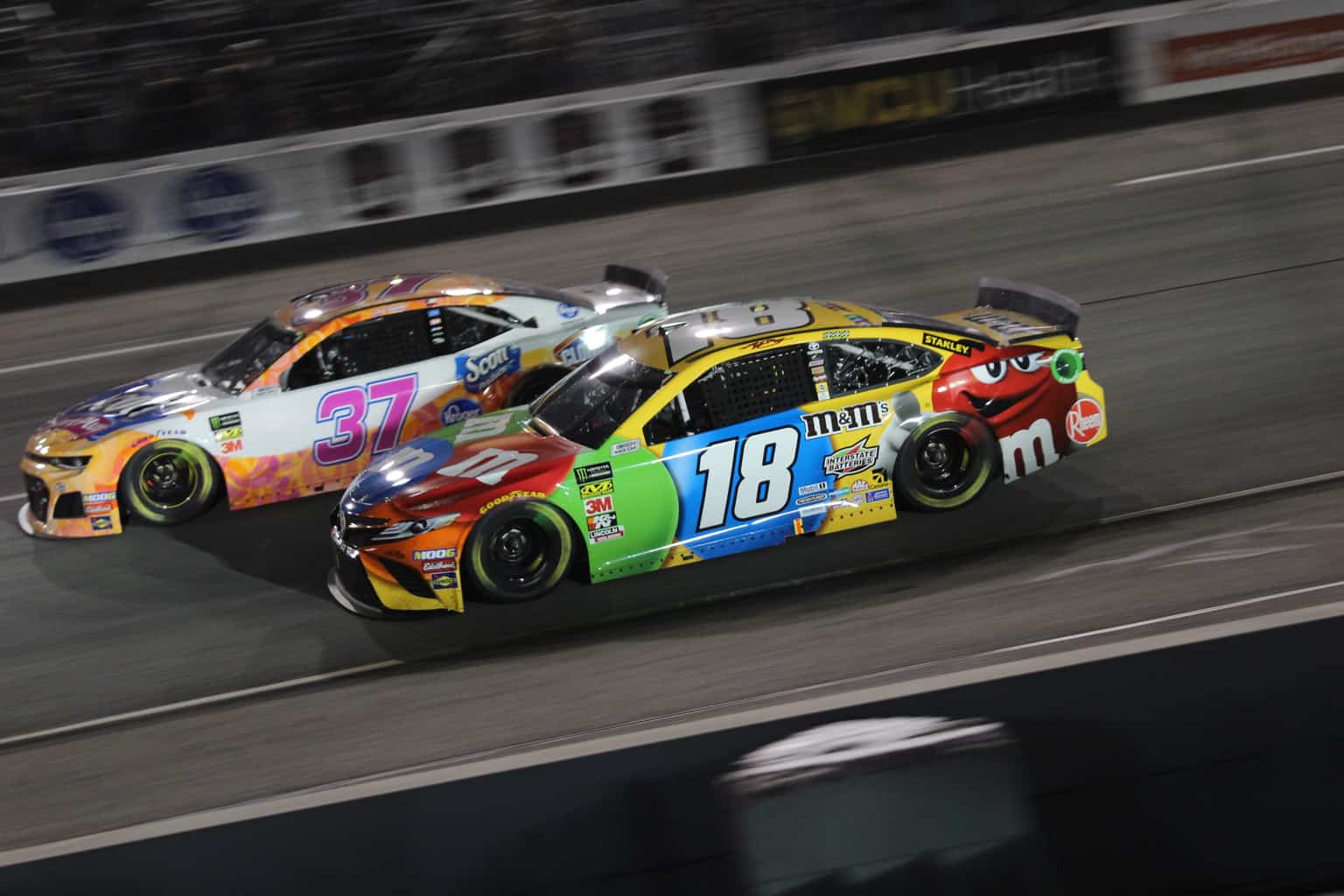 As NASCAR strolls into a rare off week, Martin Truex Jr. is riding high off of his first short track victory. Is Truex finally starting to turn the corner at Joe Gibbs Racing and reclaim his old dominance?

Clint Bowyer has quietly put together four straight top-10 finishes, including a third-place result at Richmond last weekend. Is Bowyer lurking as the top dog at Stewart-Haas Racing?

As the season has surpassed the one-quarter mark, Daniel Suarez is off to his best start of his young career. Currently sitting 12th in points, can Suarez maintain his increased competitiveness and earn a prized playoff spot?

After six straight top 10s, Aric Almirola has seemingly fallen off a cliff with results outside the top 20 in the last two events, including a last place finish at Bristol. Should the Almirola camp be worried, or is this stretch just bad luck?

Numerous questions remain as NASCAR pulls into the pits this week to celebrate the Easter holiday before climbing back onto the saddle for the annual 200 mph chess game at Talladega in just under two weeks. After an interesting event at Richmond Raceway, our Frontstretch experts were put to the test to determine the 12 best drivers in present day NASCAR. Without further ado, here are Power Rankings after Richmond…

In Richmond, Busch won stage one and was out front for an additional 101 circuits around the Virginia track. But, mid-race, the No. 18 driver was snookered by a pit road penalty and subsequently never showed the muscle to get to the front and challenge teammate Truex for the race win. Yet, his eighth-place finish was just Busch’s third result outside the top five this season. He’s pretty good.

The other stage winner at Richmond was Logano, who captured the green and white checkered flag at the stage two break. But like Busch, Logano was snookered by a problem. However, it was neither a pit road issue nor penalty, but rather a run-in with teammate Brad Keselowski, which left the Connecticut native fuming for a few moments. Despite the issue, Logano caught the leader Truex in the closing laps, but was unsuccessful passing the 2017 champ, ultimately finishing in the runner up spot.

“He roughed up MTJ last fall to win at Martinsville. How come he failed to do the same last Saturday night?” -Kobe Lambeth, Kobelambeth.com

“Was he playing Mr. Nice Guy at Richmond so that he can forget about weekend etiquettes in the playoffs?” -Rob Tiongson, The Podium Finish

They say it is always good to come home. Hamlin hoped to have a good showing in front of the local fans at his home track, but like Busch and Logano before, he too ran into problems, as did just about everyone else.

The No. 11 wheelman was one of nearly a quarter of the field to have their qualifying time voided and were forced to the back of the starting grid due to pre-race inspection failure. Yet, Hamlin was the only competitor out of those who suffered grid penalties who managed to score a finish inside the top five. Surprisingly, Hamlin did not get a speeding penalty this week, which resets our counter.

Another top 5 for our @FedEx @ToyotaRacing car.. kept making it better and better as the race went on. Looking forward to a week off to relax and hang with the family. ?

“Hamlin might’ve won Richmond had he sped down pit road. Instead, he just got a top five.” -Massie

“The 2019 resurgence continues with another top five at his home track.” -Eric Estepp, Out of the Groove

After questions were raised last week by our panel about a potential slump, Truex was quick to shut the door of any potential falterings. A winless drought that spanned 25 races ended with a trip to Victory Lane for the first time since he and crew chief Cole Pearn joined Joe Gibbs Racing. Since becoming a full-time driver in 2006, Truex has now scored a victory for four different teams: Earnhardt Ganassi Racing, Michael Waltrip Racing, Furniture Row Racing and JGR.

“MTJ was about to pour himself a glass of Orange Vanilla Coke. (Sorry, that commercial was shoved down our throats all race.) One caution and either Bowyer or Logano probably would have won.” -Trey Normile, RawGator

This week’s lucky number seven driver was Keselowski who finished in, you guessed it, seventh place. While Keselowski is probably enjoying the off week, he sure is anxious to get to Talladega. Once the unbeatable king of Talladega Spuerspeedway, the Michigander hopes to add another win to the column. Despite slipping a bit in recent races at the mammoth Alabama track in the last couple years, Keselowski has the stats on his side next weekend.

That @allianceparts Ford Mustang is looking ??.

Who’s rooting for @keselowski and the No. 2 crew? ?#Penske6Wide | #NASCAR pic.twitter.com/XE0m2f9rkJ

“At least Keselowski was in the right spot for all of his restarts this week.” -Massie

Happy has not scored a win yet this season, which is pretty dismal for Harvick’s standards. Yet, the off week give his crew the time to regroup and prepare for the next stretch of races. While the crew reorganizes, Harvick got his off week started out by creating whatever this is…

“He’s got to win sometime, right? Not exactly “The Closer” this year.” -Dan Greene, Frontstretch

Would’ve never thought in a million years that I would be in my living room glued to the TV, on the edge of my seat…..watching golf!! ?

“It was nice to see a night race storyline involving Bowyer and Truex in Richmond end without any controversy.” -Aaron Bearden, Motorsports Beat

“Easily the best in class for Chevrolet thus far, which is admittedly like getting the best pair of shoes in an old bowling alley so far.” -Bearden

Suarez admittedly struggled figuring Richmond out. Like Hamlin, Suarez was among the drivers that had to start in the back of the field. Although Suarez finished just inside the top 20, the 27-year-old scored stage points at both breaks. Confidence and momentum seems to be multiplying for the No. 41 brigade at the right time.

We had a difficult race last night. We learned a lot and we have a good team, so we will come back later this year and be better. #SuarezNation pic.twitter.com/rUcnwVNmwM

“He is lurking in the weeds and could pounce at any moment. Look out.” -Zach Gillispie, Fronstretch

Once again, Blaney is taking shots at his good friend Bubba Wallace. Seriously dude, calm down well no, please don’t. You’re so entertaining.

On a side note, Richmond was not as entertaining for Blaney. It might as well be summed up best by our panelist Trey Normile…

Atleast that one will finish on the lead lap. https://t.co/rm1DLKJtHT

“Put a corkscrew on the frontstretch of Pocono and Blaney would find it easier than driving Richmond.” -Normile

“A day to forget.” -Lambeth

When Almriola makes our list, there always seems to be something regarding top 10s for the No. 10 machine. We might need to change that after a goose egg in that column across the last two races.

However, the next track on the schedule might just be the perfect place for the Floridian to break the streak. Take a look at Almirola’s stats across the last four Talladega races: best average finishing position, four top 10s (the only driver to hit that mark), four top 20s (a mark shared with only Daniel Suarez), and the defending race winner from last fall. That seems pretty good…

…if he can survive the wrecks.

“The next race for the Monster Energy NASCAR Cup Series is at Talladega Superspeedway. Aric Almirola may deliver Stewart-Haas Racing its first win this season there.” -Mark Kristl, Frontstretch

Why say anything about Newman when Dale Jr sums it all up?

"@RyanJNewman, man, he's really turned that @Roush6Team program around."@DaleJr gave a shoutout to Ryan Newman, who's put the @RoushFenway No. 6 car in position to make the Playoffs early on in 2019. pic.twitter.com/U0le0fC71Y

“If nobody can pass Newman, why doesn’t he win every race? That should get you thinking.” -Gillispie