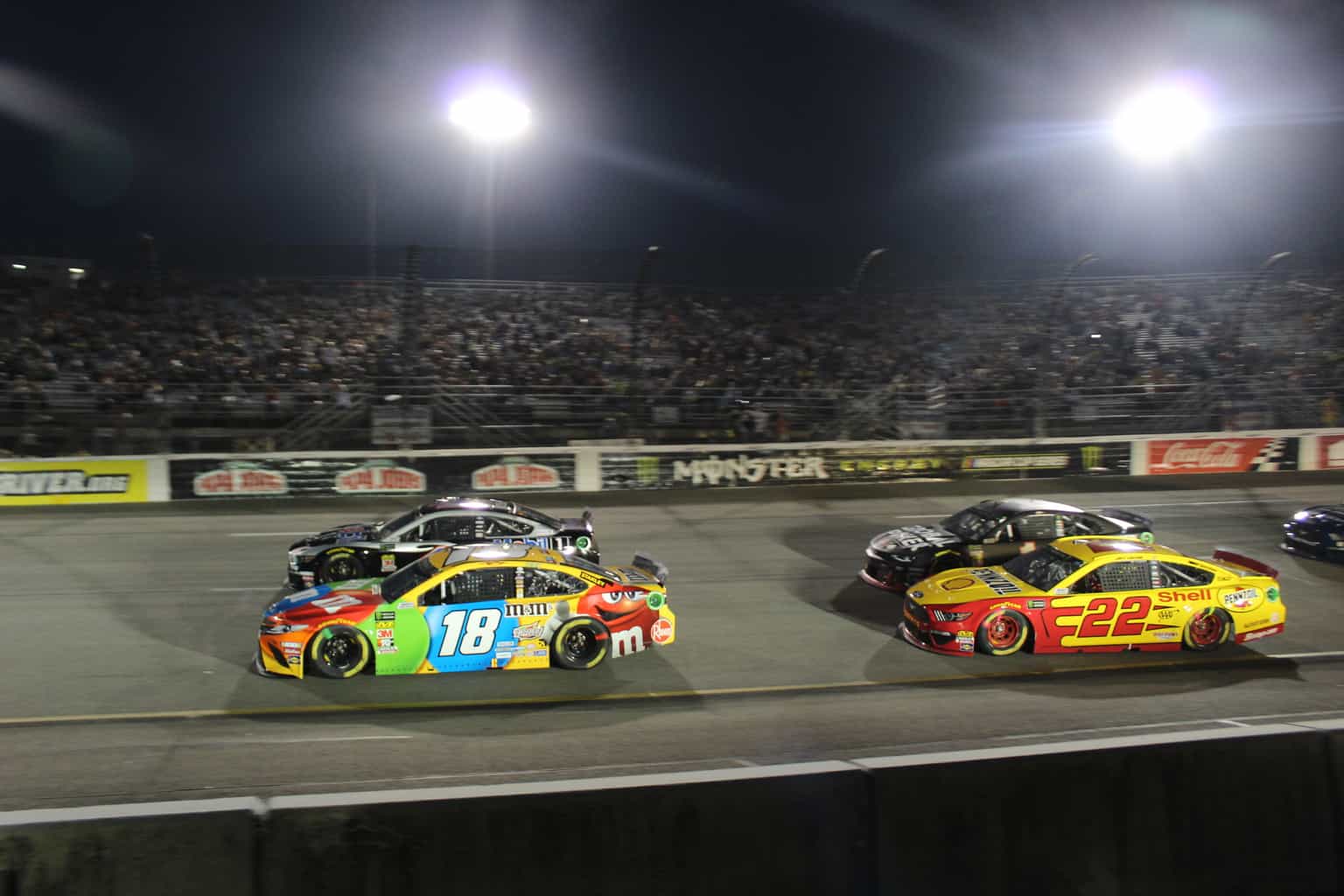 Aside from the race Saturday night, one of the biggest stories in NASCAR recently is Jimmie Johnson running the Boston Marathon.  As we know now, he did it in three hours, nine minutes and seven seconds. Note that Boston’s course is considered to be one of the more difficult marathons.

However, Johnson is not the first Cup driver to do this. Michael Waltrip ran the Boston Marathon a number of years ago but at a much slower pace.

Since he’s the only person who’s done this before, Waltrip went to do a one-on-one interview with Johnson.

Jimmie Johnson completed the Boston Marathon with a time of 3 hours, 9 minutes and 7 seconds.

Watch as he talks with Michael Waltrip about his motivations behind entering one of the most prestigious marathons in the world. pic.twitter.com/n3SqplHPgh

Here, Johnson talks his preparations for the event, the outpouring of support that he’s received and more. According to Monday’s edition of The Dale Jr. Download, Johnson has run 1000 miles this year in preparation for the race.

I liked the piece, but I would have liked Waltrip to give more input on his own experience with the race. Remember, he’s the one that had done it before (as of the time this feature aired). He could have given advice to Johnson on various parts of the course and maybe informed the viewers on his own training regimen. He was in a rare position of authority and failed to take advantage of it to educate viewers to the best of his ability.

At the track, the big story concerned the eight drivers that failed pre-race inspection. Early on, there was a heavy focus on these drivers. I’m not really opposed to such a move since the majority of the action at that point surrounded those drivers. The penalty didn’t really affect the race for someone like Joey Gase all that much, but it definitely affected drivers like Johnson, Erik Jones and Aric Almirola negatively.

FOX made an error in showing the pictures of Richmond through the years. It showed a picture of Richmond from what I guess is the early 1990s and labeled it as being from 1978. 1978 (as Mike Joy noted) is 10 years before the track was reconfigured into the current three-quarters of a mile it is today.

With that said, FOX let the pit reporters call stops during the one round of green flag pit stops Saturday night. That doesn’t sound like much, but it hasn’t been the case in recent weeks. The booth has effectively called rounds of green-flag pit stops as of late. That setup has sounded odd and unusually quiet, so it was a nice change of pace.

In the last 120 laps or so, things really started to heat up at the front of the field. Despite a 148-lap green-flag run to end the race, there wound up being some different action.  Late in the race, FOX showed a lot of that action toward the front.

Even though the race seemed pretty quick to me (just a little over three hours), it was all but right up against the end of the time slot by the time the checkered flag flew.  As a result, there was only really time for interviews with the top three finishers (Martin Truex Jr., Joey Logano and Clint Bowyer), along with a check of the points before FOX left Richmond.

Compared to recent races, I found FOX’s coverage Saturday night to be a little low-key. Coverage of on-track action varied. Early on, it was decent, but storyline-based. In that case, it was largely based around those who had to come from the rear. Then, there was a lull from about lap 75 to 280 before it picked up again. Tire wear was a big topic, yet we still never got to see what that wear looked like.  It makes me wonder if that’s a conscious decision by FOX, something it overlooked or if the teams won’t let them put the tires on camera. These days, I’m willing to believe that it could be the third option, but I’m not sure.

Beyond halfway, you didn’t hear much about the penalized cars at all, aside from Daniel Suarez squandering a good night with a penalty. Only Denny Hamlin managed a top-10 finish out of all of them.

My advice here would be to open up the coverage a little more. Be more descriptive of who’s moving up and who’s moving back, not just those that fit into a storyline chosen hours (or even days) before the race. Flexibility is key. Show the viewers as much on-track action as you can. Dover could be a place to try out this strategy.

Talladega in two weeks is probably the exception to the aforementioned rule since most everyone will be running together.

Easter weekend is the thinnest race weekend of the season. There is basically nothing happening this weekend. That said, I still have more content for you. Last fall, I interviewed Kelli Stavast as part of an inside piece on NBC Sports’ NASCAR coverage.  We’ll have a feature based on that interview.

For the Critic’s Annex, we’ll take a look at Friday night’s ToyotaCare 250.  I did see part of the repeat of the race Friday night (there was a midnight replay that I caught some of while eating dinner at my hotel). For you Ryan Sieg fans (and I know there are a number of you), you should be satisfied.  Plus, you have Chad Knaus in the booth. That was very interesting.

I agree with you 100%, a broadcast can really swing a sporting event one way or another. There is so much action on the track, so many comers and goers and all we do is here about it from the announcers after the race….show us during the race, show some excitement. Like I have stated in the past, former athletes have shown time and time again that the booth is not meant for them. It takes a different kind of talent to be a great color analyst and yet across all sports they keep pushing former athletes into the booth.
When you go back and watch a race from the 80s 90s and 00s, the leader wins by 2 to 3 seconds but because of the broadcast it never feels that way. I just wish the networks would realize this. Soccer to me is boring to watch but the analysts actually make it a joy to watch, there is passion and excitement, fast paced discussions as they try and get to all the action, yet there is only 1 ball and typically not a lot of points scored. Thing is by the end of the game it doesn’t feel that way, same with NASCAR, there is a ton of action on the track with 40 cars all running side by side for position yet people remember the race as a bore and that people can’t pass. It is a shame :(

Ned Jarrett once said in his day “They covered a race and a story developed. Now they cover a story and a race breaks out”.
I miss the ESPN days with Bob Jenkins, Ned and Benny.

The cars were shown so you could see the sponsors, not like todag. And the cars were actually referred to as the STP Pontiac, Wrangler Jeans Chevy. Etc. Now everything is scripted and if a sponsor wants their car shown, they had better bought commercials during the broadcast.

I cannot lie, after Kyle Busch started checking out from the field in the first segment, I lost interest and changed the channel. Nothing against Kyle Busch, per se, but it illustrated that even with all the changes to the cars that clean air rules, while the big spoiler causing aero-pushes held down passing.

Another thought, Fox is way too addicted to the “gimmicks”, be they in-car cameras, bumper cams, or the dreaded “ghost car” simulations. Not to mention their habit of zooming in on a few cars for long periods of time, which I bet is a holdover from their “mention money” days in the 00’s. Old, bad habits die hard, I guess?

I look forward to your column while I do not always agree, you do a good job!
The TV coverage on Fox leaves a lot to be desired. There never has been a good time for Fox and I can’t wait until NBC takes over the coverage.

It is apparent to me, and I’ve said this before, that FOX is not covering the races. FOX is putting on a 3-4 advertising campaign with racing the the background in order to minimize how much money they are losing right now. I cannot wait to see how the next TV deals go down with negotiations.