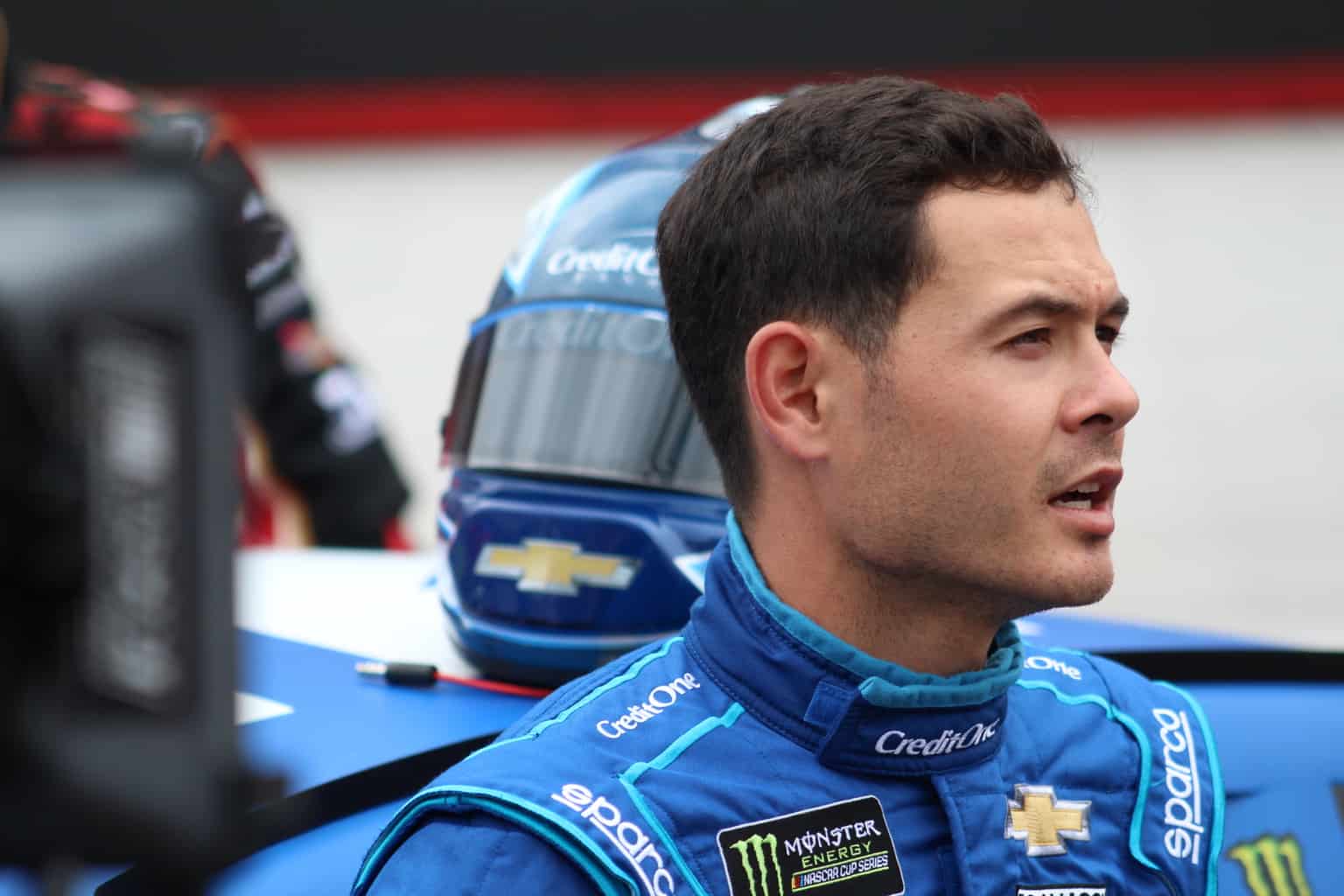 Kyle Larson hasn’t exactly had the best start to 2019. Through the opening nine races, he has only two top 10s and zero top fives. Larson has finished off the lead lap in three consecutive races.

Larson didn’t sound thrilled with his team at Richmond Raceway on Saturday night (April 13) when they didn’t completely clear the fender following a blown tire, leading to another blown tire a few laps later. Larson has been critical of Chip Ganassi Racing with Felix Sabates in the past, but also loyal to the team that gave him his break.

That leads to this week’s 2-Headed Monster: Should Larson leave Ganassi and take his talents elsewhere? Michael Massie and Adam Cheek debate.

Larson has said in the past that he would never leave Ganassi, and I believe he won’t – and shouldn’t ever leave the team.

Ganassi is the reason Larson has a Monster Energy NASCAR Cup Series career. Toyota may have originally signed Larson to a development deal, but they signed a great many other drivers as well, and many of those drivers failed to make it because they didn’t have money. Larson would have fallen by the wayside at Toyota as well.

When all the other teams wanted Larson to bring sponsorship dollars — which he didn’t have — Ganassi put him in a car in a situation where all Larson had to bring was talent. If not for Ganassi’s belief in Larson’s driving ability, then Larson would still be dirt racing somewhere.

The sponsors that Larson has now — Credit One, McDonald’s — are Ganassi sponsors. If Larson were to leave, maybe some would go with him, but it’s unlikely he could bring full sponsorship to another team. Of course, if all of his current sponsors actually did go with him, then Larson would be leaving Ganassi’s No. 42 team in a terrible hole. I can’t foresee Larson doing that to someone who has done so much for his career.

Sure, Ganassi might not always have the best equipment in the garage, but they still show speed and they have been faster than Hendrick Motorsports at the moment. Once the Chevrolet’s get their mojo back, that No. 42 will be a major contender. With the way things go in the sport, that will probably happen before the season reaches the halfway point.

Plus, this would be a terrible time to leave Ganassi. The team just picked up Kurt Busch, and he is having incredible performances in the No. 1 car. Larson finally has a teammate whose information is worth sharing. Together, Busch and Larson will win several races.

Right now, the grass may seem greener at Stewart-Haas Racing, Team Penske or Joe Gibbs Racing, but will that be the case next year? Gibbs is dominant this year, but last year Kyle Busch was the only good thing about the team. The teams that lead the field varies so much on a year-to-year basis that a driver can’t count on having more success by jumping to another team.

Larson currently drives for a team that wants him and will do whatever it takes to be successful with him. If he moves to one of the four-car teams, then he might not get as much of the focus. When Dale Earnhardt Jr. left DEI for Hendrick, did he have more success? No, he was overshadowed by the greatness of Jeff Gordon and Jimmie Johnson. Earnhardt won races, but he never again found the success that he had when he was the face of the smaller DEI.

Sooner or later, Ganassi will work out its kinks and Larson will be even more successful. It will be worth his while for Larson to wait it out and stick with the team that made him what he is. –Michael Massie

It’s Time to Leave CGR in the Dust (Or Dirt, If You Will)

Kyle Larson is one of the most talented young drivers on the Cup Series circuit. There’s no denying that. Larson should also start actively looking for another ride.

The veteran has recorded five wins over five years, four of those in a single campaign in 2017.

Some of his struggles could be blamed on the downforce package or the Camaro still taking some time to adjust to. The second argument is somewhat invalid, however, as Larson nearly won several races in 2018 in the new Chevrolet.

He had six second-place finishes last year, including runs at both Bristol Motor Speedway races and Chicagoland Speedway where he was in contention for the win. We can’t forget Darlington Raceway either, where Larson dominated but faded after the last cycle of pit stops.

It’s not necessarily the fault of Chip Ganassi Racing’s equipment either, but it should be noted that they’re more or less the fifth-tier team in the garage – behind Hendrick, ahead of Richard Childress Racing.

If Larson wants to put together a championship-caliber campaign, he should start looking elsewhere for a ride. Team Penske is set for years to come unless they add a fourth car. And maybe that could be an option.

Joe Gibbs Racing has a concrete four-car stable, with Christopher Bell in reserve for what could be the long haul, while Stewart-Haas Racing seems set for a time as well. Kevin Harvick and Aric Almirola will be retained for a while, Clint Bowyer is having a career revival in the No. 14 and Daniel Suarez just arrived and is performing well, scoring four top 10s so far this year.

Hendrick Motorsports is probably the most viable option. While Chase Elliott, William Byron and Alex Bowman are pretty much certain on the HMS roster for the next few years, Jimmie Johnson’s future is somewhat up in the air. That No. 48 could be Larson’s next landing spot.

While there aren’t many places up that Larson could go, it’s always a possibility. Larson is only 26 years old and has years of racing ahead of him. For that to go anywhere, he should move up and get behind the wheel of a top-tier car. Penske or Hendrick would be great options, or something completely unforeseen could happen.

Whatever the case, it’s time for Larson to look elsewhere and make a championship run. – Adam Cheek

Sorry Adam, your wrong. Sure Kyle can ride the wall better than anyone, but as we’ve all seen time after time, he always ends up hitting that wall. Is it lack of concentration of car malfunction ! Kyle’s young , he’s years from hitting his prime. Kurt is the perfect teammate for Kyle to really learn from because he’s very knowledgeable about what the cars are doing, and why. There is no guarantee Kyle would be driving better equipment elsewhere, in fact perhaps just the opposite. Kurt can help Kyle learn how to relate what the car is doing to his team. Loyalty will be rewarded Kyle, stick around cause Chip wants you to win just as much as you do, and he will find a way.

I don’t think Larson’s issue is the team or equipment he’s in… his problem is between his ears. Just listen to any interview he gives – he still does not believe in his mind that he belongs. He lacks confidence – he is not convinced he’s good enough to win, thus it’s a self-fulfilling prophecy. I don’t know if he currently has one or uses one, but I wonder if a season utilizing the services of a sports psychologist would turn him into a contender?

Right now, Larson is the one most hurt by this rules package. He grew up on dirt sprints where you have way more horsepower than you can handle. This package doesn’t let his skills and car control shine. It’s momentum racing. I think Larson is more likely to run out his contract for Ganassi and leave NASCAR to run World of Outlaws full time. He’s probably already made enough money to go do that.

Kyle Larson is over rated, and has been for years. Sure he has his moments, but he is most consistent with
his love affair with hitting the wall. He is his own worst enemy, not Chip or his team. HE is the problem. IMO.

Kyle just needs to stay the course at CGR and learn all he can from Kurt.

I’m sorry. It’s all my fault. Whenever I start rooting for a new driver, they start doing bad or something happens to them. e.g., Davey Allison, Ernie Irvan, Ricky Rudd, Ryan Newman, Carl Edwards, and now Larson. So I’m going to do everyone a favor and now I’m rooting for Kyle Busch. Doesn’t seem to be working so far though.