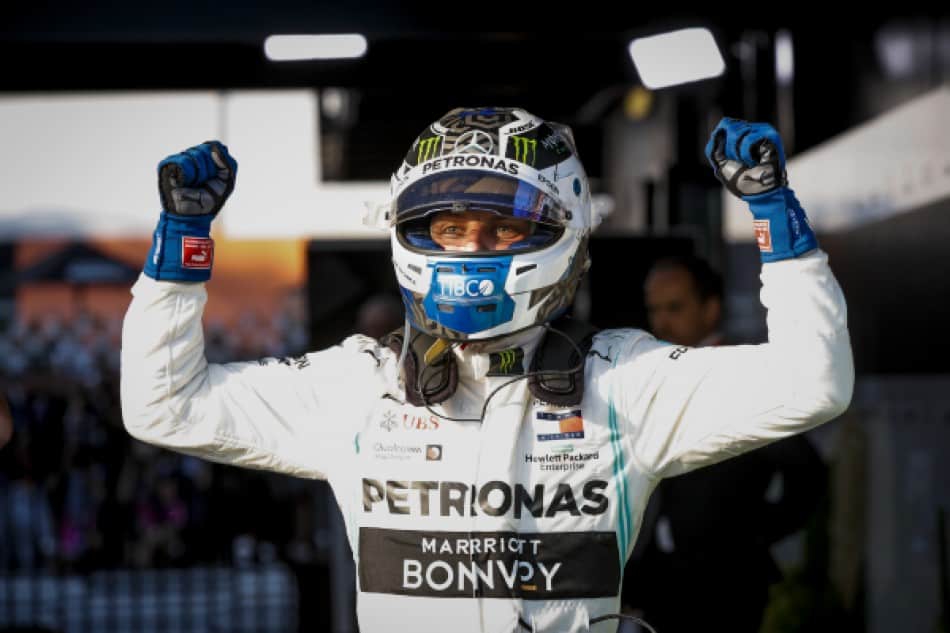 Valtteri Bottas started second at the Australian Grand Prix in Melbourne’s Albert Park on Sunday (March 17) but edged teammate, and reigning champion, Lewis Hamilton, by the first turn to sprint out to what would become a dominating victory.  The win was the fourth of the Finn’s career and first since 2017. Hamilton finished second – though 20 seconds behind.

Max Verstappen, debuting a Honda engine in his Red Bull, may have alleviated cause for concern about the switch to the Japanese company during the offseason, by taking third.  In what can be considered a disappointing run, Ferrari’s Sebastian Vettel finished fourth. Yet in contrast, Charles Leclerc, also of Ferrari, must have been content with his fifth-place spot.

For Bottas, the race win is a huge boost to his confidence after going winless last year and seemingly falling apart in the second half of the season.  At times last year, it seemed that he was barely even driving the same care as his teammate. Questions about whether Mercedes would keep him began to circulate.

It looks like the Silver Arrows made the right move, as Bottas drove a clinical race.  He never faced a threat and when discussing the race afterward, described it as his “best race ever.”  Bottas also scored a bonus point by claiming the fastest lap of the race, doing so on the penultimate circuit.

For Mercedes, the weekend showcased just how dominant they are.  As it looked like Ferrari had passed the team through testing, having adapted better to the body changes for this season, Mercedes has squashed that notion and appears to be just as formidable as ever.

Ferrari, on the other hand, must be feeling a bit flummoxed after a poor qualifying effort was then followed by lackluster race performance.  Vettel was supposed to start the season with a strong statement but all that can be gleaned from the Ferrari weekend is that they still have a good deal of work to do.

That Ferrari were outdone by the fledgling Red Bull-Honda alliance will sting all the more.  Honda, who has struggled with both speed and reliability since returning to the sport five years ago, might just have found the partner they were looking for; one that might be able to live up to the history of the McLaren-Honda venture of the 1990s.  For now, Red Bull and Honda can enjoy a bit of the new loverʻs glint in each otherʻs eyes.

– Kimi Raikkonen, after essentially being demoted from Ferrari to Alfa Romeo, still earned a top 10 finish.  That his teammate, rookie Antonio Giovinazzi, could only manage to pull a 15th place finish provides a comment as to just how strong the Finn is even in a subpar ride.

– McLarenʻs duo of rookie Lando Norris and Carlos Sainz found out just how difficult last yearʻs drivers Fernando Alonso and Stoffel Vandoorne had it.  Norris started eighth but couldnʻt hold the pace and finished in twelth. Sainz got it worse as he mimicked many of Alsonoʻs races with a DNF due to an engine expiration.

– A final note.  Daniel Ricciardo, making his debut with Renault after switching from Red Bull, had a difficult race ahead of him because of a poor qualifying effort that put him in 13th.  Things did not fare well. He clipped the grass on the side of the track on the start causing his front wing to rip off and the Australian to limp around the track before getting a new one.  Then, 27 laps later, he pulled his car to a stop to claim a DNF for his first race with the French team. Oy vie!

Issuing One Point for the fastest lap in the race, provided you finish in the top ten has the drivers possibly throwing away a good finish chasing that point. It kind of reminds me of what stage racing does to NASCAR.