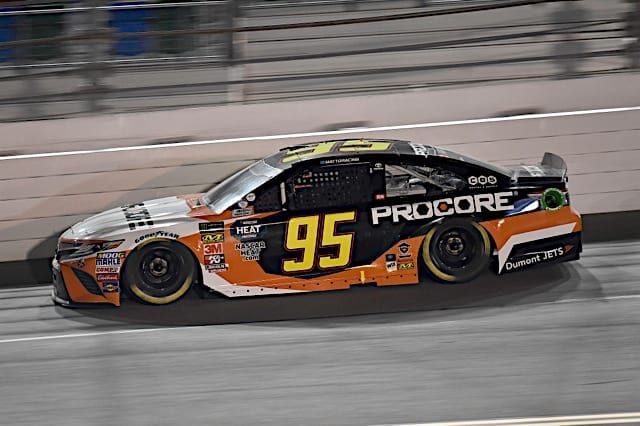 Many people had Matt DiBenedetto on their fantasy teams for the Daytona 500. He proved those people right on Sunday (Feb. 17).

It took DiBenedetto 141 races and a switch to Leavine Family Racing, but he had his coming out party in the Great American Race, leading a race-high 49 laps. In fact, he led more laps on Sunday than he did in previous 140 races combined (23).

However, on lap 190, DiBenedetto’s dream day came to an end, being turned by Paul Menard at the front of the field. It triggered a 21-car incident.

“It was just a racing deal, nothing intentional, DiBenedetto said after the race. “I think he was trying to sneak to my outside, but wasn’t quite there and when he bumped me it clipped my right rear and put me in the wall.”

Among drivers involved in the incident were pre-race favorites Joey Logano, Ryan Blaney, Chase Elliott and William Byron. But leading laps is something DiBenedetto and the No. 95 aren’t accustomed to, thus making it a crushing loss.

“We had one hell of a day going,” he said. “I don’t know if anyone understands how big of a chance they took on me. I will be forever grateful. We showed what we were here to do. Led the most laps, had a fast racecar, so I’m thankful for all of that, but I’m pretty heartbroken.

“This was the most amazing heartbreaking day all in the same day. Unbelievable how fast my car was, I’ve never had a piece underneath me like that. It was heartbreaking, but really neat to lead that many laps, have that many good things going.”

The end result was a 28th-place finish for DiBenedetto. However, the team scored five stage points in the second stage, after leading most of the 60 laps.

“I wasn’t surprised at all,” Kyle Busch said of the No. 95 team. “I feel like they did a really good job, and Matt did a great job behind the wheel, he was fast, he was smooth, he looked really good.  Was just disappointed that he wasn’t able to kind of be there at the end.”

“He was running great, obviously Wheels [Mike Wheeler, crew chief] has a lot of notes from when we were successful here and that car was super strong,” Hamlin said. “It will be very important for us to have that car running strong and to gather more information because as as organization we don’t want to lose a car. And by losing Furniture Row [Racing] last year, hopefully that [No.] 95 team can pick up where they left off.”

Throughout Speedweeks, DiBenedetto had a fast No. 95 Toyota. However, Leavine Family Racing is still a small race team, coming off a season in which it finished in the mid-20s in the owner’s standings.

Moving on to Atlanta Motor Speedway, DiBenedetto is taking his confidence he gained from Daytona and will go guns ablazing next weekend.

Matty D drove a heckuva race! Loved to see him wheelin’ that 95 up front.

It’s a plate race. The car will get its usual finishes until the next restricted air flow race.