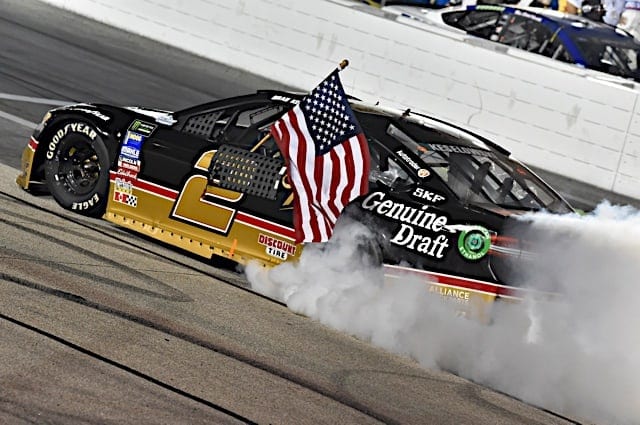 2018 will go down as the year that got away for Brad Keselowski.

He had the speed to win his second Monster Energy NASCAR Cup Series championship — evidenced by his Team Penske teammate Joey Logano winning the title — but was plagued by bad luck when it mattered the most.

Still, it was a milestone season for the driver of the No. 2 Ford. He won three straight races for the first time in his career with two of them coming in crown jewel races: the Southern 500 and the Brickyard 400.

It was Roger Penske’s first Southern 500 win since Bobby Allison won it for him in 1975, and the Captain had never won a Cup race at Indianapolis Motor Speedway prior to Keselowski’s feat. Keselowski’s last win of the season at Las Vegas Motor Speedway notched Penske’s 500th win in motorsports overall.

After Ford struggled through much of the 2017 season, it seemed like it would be more of the same in the Blue Oval’s final year racing the Fusion, especially given Keselowski’s comments in December 2017.

The quote was from December 2017, as I recall it went something like this.
Question- “what’s your outlook on 2018?

Answer- “We finished the year way behind, the Fords will take a drubbing IF the rules don’t change for 2018.” The rules changed a month later…

Instead, Ford was the dominant manufacturer all season long. Keselowski kicked it off by going from last to first to dominate and win The Clash at Daytona International Speedway. But despite being one of the most decorated superspeedway racers in NASCAR, Keselowski failed once again to win the Daytona 500, getting caught up in one of the numerous crashes.

The Michigan native bounced back the following weekend at Atlanta Motor Speedway where he won a stage and finished runner up to Kevin Harvick. The 2012 Cup champion built on that run, finishing in the top 10 in three of the next four races.

But that momentum came to an abrupt halt when Keselowski had terrible luck ruin any shot he had at winning the next several races. After crashing out at Texas Motor Speedway, Keselowski won the first two stages at Bristol Motor Speedway before a late wreck knocked him back to a 23rd-place finish.

According to FS1, Brad Keselowski thought practice started at 12:30 and was in the bus when he heard the cars rolling and asked who was on the track. #nascar

After a top 10 at Richmond Raceway, Keselowski was fast as usual at Talladega Superspeedway. He won a stage and was one of the guys to beat before getting caught up in the Big One at the end.

Keselowski rebounded with a sixth at Dover International Speedway after leading 108 laps. This started a streak of seven-consecutive top 15s for the No. 2 team, including top fives at Charlotte Motor Speedway and Pocono Raceway.

It looked like that consistency would pay off with a win in the July Daytona race, but instead Keselowski’s car left on a wrecker. The six-time superspeedway winner was attempting a pass for the lead when rookie William Byron threw a late block on the No. 2. Keselowski checked up and Ricky Stenhouse Jr. got into the back of him, causing a huge wreck and ruining Keselowski’s night.

After a third-place effort at Kentucky Speedway, Keselowski had two more finishes outside the top 30 and a 17th at Watkins Glen International. Keselowski finally righted the ship at Michigan International Speedway where he came one position shy of finally winning at his home track.

Brad @keselowski: "A win here would be like winning the Daytona 500 for me." @MISpeedway
"The fact that we've been so close and not achieved it, is certainly very top of mind every time we come here. We're pushing hard to make it happen. I feel like we have a decent shot."

After a 16th in the August Bristol race, Keselowski’s team finally found their sweet spot. Kyle Larson had been up front for nearly the entire Southern 500 when Keselowski’s crew got him out ahead of the No. 42 on the final pit stop. Keselowski held off Larson and won his first NASCAR crown jewel — all while driving a Rusty Wallace throwback paint scheme.

Brad @Keselowski's win in the Southern 500 at @TooToughToTame was made sweeter in the old Rusty Wallace throwback paint scheme. #TBT pic.twitter.com/XheVaORvYb

Keselowski stole another one the following week at the iconic Indianapolis to win his second straight crown jewel. This time, Denny Hamlin was the dominant car before Keselowski’s crew chief Paul Wolfe put fresh tires on the No. 2 for the final run. After a tough battle, Keselowski got around Hamlin using the fresher rubber and won his and Penske’s first Brickyard 400. Keselowski was the hottest driver headed into the playoffs.

The kissing of the bricks.

Congratulations to Brad @Keselowski. Your winner of the #Brickyard400 at @IMS! pic.twitter.com/yMS0mjtRiv

The hot streak continued in the playoff opener at Las Vegas Motor Speedway, where Keselowski once again out-dueled Larson to grab his third-consecutive win. He joined Harvick and Kyle Busch as the only drivers to win three straight races in 2018. It was Keselowski’s third career Vegas win and Penske’s 500th win.

Here’s how that burnout looked from the ?? cam. pic.twitter.com/IPxaz4Eqgn

The winning streak ended at Richmond, but Keselowski still came away with a respectable ninth and led 67 laps. Keselowski then had a chance to become the first ever winner at the Charlotte Motor Speedway ROVAL, but crashed from the lead on the restart with five laps to go when he overdrove Turn 1 and went nose-first into the wall.

Fortunately for Keselowski, the Las Vegas win had already locked him into the next round of the playoffs. But that was where his championship hopes started to unwind. In the opening Round of 12 race at Dover, Keselowski was racing inside the top five with three to go when Aric Almirola lost control on the outside of him and wrecked them both. Keselowski finished in 14th, but the incident cost him approximately 10 points.

Keselowski endured more back luck the next week at Talladega. He raced around fifth place for most of the day before a late caution pushed the race into overtime. NASCAR added five laps to the scheduled distance, and as a result, Keselowski had to pit for fuel as the field was taking the green flag. This knocked him back to finish 27th, costing him somewhere in the ballpark of 20 points.

This marked the first time in Keselowski’s career where he didn’t have a single top-25 finish at a superspeedway — the tracks that have been his bread and butter.

Keselowski was 18 points below the cutline headed to the last race of the round at Kansas Speedway. He and Wolfe used strategy to get the lead on a few occasions, but could only muster a sixth place and failed to advance to the Round of 8 one year after making it to the Championship 4.

Despite being out of the title hunt, Keselowski closed the season strong, finishing in the top five in three of the final four races. At Martinsville, he got to Logano’s bumper, but cut his teammate some slack. He was rooted out late and fell back to fifth.

In the penultimate race of the season at ISM Raceway at Phoenix, Keselowski was reeling in Busch for the lead but ran out of laps, finishing half a second behind in second.

While the 2018 season provided Keselowski with some of the biggest moments of his career so far, one can’t help but wonder what could have been had just a few things gone differently. He was one of the championship favorites — a driver many thought could contend with the Big 3 — yet he didn’t even make it out of Round of 12.

But with Penske teammate Logano winning the championship, Keselowski has to be all the hungrier to go win his second title. However, the team will likely face an early-season setback in 2019 due to Ford switching to the Mustang — similar to how Chevrolet struggled early this season after switching to the Camaro.

While Keselowski and Wolfe are both set to return to the No. 2 team next year, the below Twitter post shows that Keselowski is up to something. Could we see a return of Brad Keselowski Racing?

If interested or know someone who fits the bill, please See thread for details on an opportunity to work directly with me on a special new long term project.

…The 2 team did the deed to themselves plenty of times.

The Roval wreck was a tough one to stomach for this BK fan. Racers want to win; I understand that, but the most important tool a racer has in his racecar is his brain. It’s a shame when it doesn’t get used.