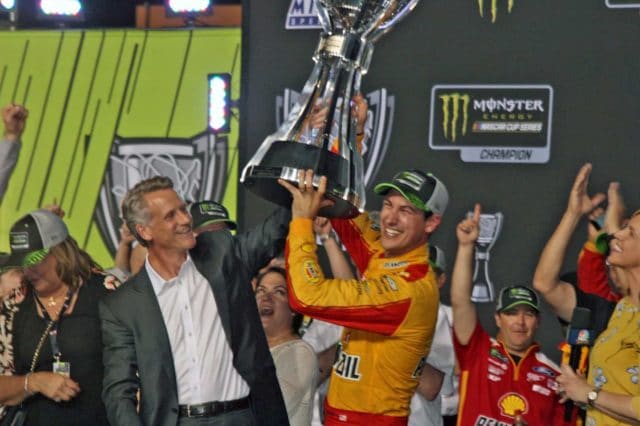 Entering Homestead, the Championship 4 was labeled as one of the best fields of four we have ever seen. Sunday’s race was proof that the label wasn’t false as all four championship contenders had a chance. The feud between Joey Logano and Martin Truex Jr. was rekindled at the end and ended the same way it did at Martinsville in October with Logano in Victory Lane.

Logano earned Roger Penske his second Monster Energy NASCAR Cup Series championship and helped give Ford its first since 2004 with Kurt Busch. With the championship victory, Logano earns the top spot in our Power Rankings but how did the rest pan out?

Logano finally earned his first career NASCAR championship Sunday by defeating Truex late in the race. Logano had a powerful Shell/Pennzoil Ford Fusion on Sunday, leading a race-high 80 laps. If he hadn’t led the final 12 laps of the race, Logano would’ve watched the champion celebrate from pit road. The powerful move on Truex late was what landed Logano the championship.

Truex was one position away from hitting that walk-off home run to send Furniture Row Racing into the sunset with a championship. It was a strong season for the driver of the No. 78 and it was capped off with his best finish since Watkins Glen in August. Truex is headed to Joe Gibbs Racing in 2019 and it could result in a good combination.

Asked what it’s like to climb out of the 78 for the last time, an emotional @MartinTruex_Jr said, “I’m not sure yet to be honest with you. I don’t know, I’m going to miss these guys. Wish we could’ve won it. We had it, we just couldn’t go for 15 laps. #WeAre78 pic.twitter.com/XLilj8VKYi

The dominant season Harvick had was enough to earn him a spot at Homestead, but there weren’t many positives at Homestead. The No. 4 team landed a third-place finish and ending the season third in the championship points. It’ll be interesting to see if he can pull the same amount of dominance he had last season.

“Really, it was a great pit call there in position to win the race if the caution doesn’t come out & we came down to a pit stop & a restart & we didn’t do either good. I just hate it for all our guys on our @JimmyJohns Ford.” https://t.co/5WEBefH8xI@KevinHarvick; 3rd in 2018. pic.twitter.com/ZuFONt4eKO

Busch’s own pit crew put him in a bind twice in Sunday’s race. The final stop was when the organization landed him the lead, but he couldn’t hold off the other three playoff drivers and finished fourth. It’s his worst finish in the points standings since 2014 where he finished 10th. Who knows what the No. 18 team can do in 2019 with Cole Pearn and Truex on the same team instead of on separate teams?

Bummed for all of our guys, Adam Stevens n my guys did a phenomenal job. This @mmschocolate Camry team was really, really good – just not good enough on the night we wanted the most.

Three career victories all coming in 2018. The year was nowhere near a failure but Elliott was able to represent Chevrolet in a time when they really needed a leader. The Hendrick organization had a lot of change in 2018 which could make things very interesting in 2019 when the organization is making even more changes.

It could be amazing to watch Elliott enter the season with the momentum he had toward the end of this season.

Thank you to all of our fans, the media and our partners.

Been a heck of a year. #di9 pic.twitter.com/vGqk2SDAUl

It’s very sad to see Kurt Busch leave Stewart-Haas Racing. He’s been a staple member of the organization since 2014 and recently has been pulling a good amount of success behind the No. 41. It would’ve been very interesting to see what would have happened if he would’ve entered Sunday’s race with a chance at winning the title.

22 top 10’s and the year end Busch Pole award! Thankful for the year we had, most proud of our 41 crew, and @BillyScott_41. Thanks @StewartHaasRcng @MonsterEnergy @Haas_Automation! Congrats @FordPerformance and @joeylogano on the Championship! pic.twitter.com/mXpvBcmK2m

Aric Almirola put the No. 10 car in places we haven’t seen in a very long time. Scott Riggs and Johnny Benson were the last two drivers to really put that car in competitive places.

What a year! I'm so proud of this team. Our first year working together and we finish 5th in points. ? We're just going to keep getting better and better. Can't wait to see what we accomplish in 2019!#SmithfieldRacing pic.twitter.com/8iRASsKXlV

It was an interesting season for Keselowski who didn’t earn his first victory until September at Darlington. Keselowski landed Penske two crown jewel victories that team owner Roger Penske had yet to earn but didn’t compete for the championship like in years past. Keselowski will have a new spotter in 2019 as Joey Meier will not be on the stand for the No. 2 car.

This is only a new chapter in one heck of a book we are writing together. ???? https://t.co/yrbNPhXvAK

Larson was about to prove to everyone that he wasn’t going to just let anyone win the race at Homestead. He rode the wall most of the race until that wall came too close. He ultimately lost a tire as a result of the contact, putting the No. 42 out of contention for the victory. Larson will have a new teammate in 2019 and it’ll be interesting to see what’ll happen with that organization next year.

I’ll also forever be thankful for the years I got to spend with @jamiemcmurray as my teammate. As a rookie to Cup racing in 2014 there’s no one else that could have been a better mentor than him. He’s a great racer, person, but especially an amazing father to 2 awesome kids! pic.twitter.com/bfMAnuAIyf

Kenseth didn’t earn a win in what could be his final two career races but he did earn two straight top-10 finishes in the No. 6 car, extending his streak of top 10s to 21 years, every year of his career. It is good to see some good things headed in the right direction for that team in a year that was otherwise forgettable.

Ryan Newman moves into this car next season and it will be interesting to see what will come of the new driver.

Logano wouldn’t be in my top 5.

Logono deserves the #1 ranking because he’s the champion. If Logano were a traditional Southern boy and/or not driving a Ford, he would not be on the receiving end of the hate.

Instead, he’s a nice kid (if a married, 28-year-old father with ten seasons of Cup experience is a “kid”) from Yankee-land that too many “traditional” fans conclude is “silver-spoon” entitled. And he won in a season when the Deep-Southern “favorites” (Chevy, HMS) all faltered badly.

An “Earnhardt” making exactly the same on-track moves in a Chevy would be roundly celebrated.

So what! Logano will easily make the HOF, will likely win 50+ races over his career and FORD IS FINALLY BACK!