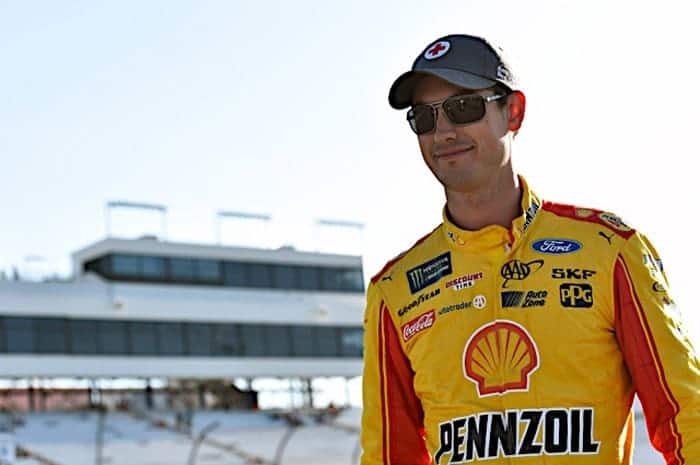 Turns out Mark Martin was right after all. Joey Logano really is the best thing since sliced bread.

The 28-year-old Team Penske driver becomes Monster Energy NASCAR Cup Series champion in his tenth full season — winning his third race of the season at Homestead-Miami Speedway and the 21st of his career, to get it done and pick up the “oversized” trophy. Back in 2015, Logano headed into the Martinsville Chase race on the back of three straight victories in the second stage and looked very much the driver to beat for the title. That, of course, was until Matt Kenseth took matters into his own hands. Fast forward three years later and despite some fan outrage, Logano used a hard-nosed move to win the race at Martinsville off the final turn and secure his spot in the Championship 4. And it’s interesting to go back and look at his unapologetic take following his win at the paperclip a few weeks ago. “I’m a hard racer, I don’t think that’s a secret to anyone, and we are here to win a championship this year.” The rest, as they say, is history.

So, was Logano the best driver this season?

Well in terms of the regular season, certainly not but into the playoffs, his form picked up incrementally and as the races ran out. And Logano looked increasingly like the real threat as the dominance from the big three wasn’t quite as suffocating in the post season. The method for crowning a Cup champion favors the teams who can stand strong under intense pressure and also rewards the drivers willing to take the big risks. At Martinsville, three years on from the Kenseth brouhaha, Logano took the risk and when the checkered flag flew on Sunday evening at Homestead that bet paid out in full. Logano is just the 33rd driver in NASCAR history to win a championship, joining teammate Brad Keselowski, who was quick to appear in Victory Lane to offer congratulations and he is the fifth different driver from a fifth different team to win a title under the final four winner takes all format.

For years, we’ve been talking about Logano as a future Cup champ. This past Sunday he turned that talk into reality. Congrats to the champion.

Imagine for a minute, if Martin Truex Jr. had managed to hold onto his lead in the waning laps and run all the way to back to back titles. What a story that would have been. Instead, unlike the euphoria of last year, all that was left was bitter disappointment — a 1.725 second margin between success and failure at the end for Furniture Row Racing.

Truex was understandably emotional in his post-race interview, noting that his team with Furniture Row Racing was “best time of my life. I don’t know what else to say. Those guys have been amazing. They’ve made me a superstar in NASCAR. I’m just very thankful for them all.”

Now, it’s fair to say that it was a collective and cohesive team effort, but there’s part of me that feels so sad that this team has had to shutter its doors. This is a championship team that came within a handful of seconds of winning it all again, don’t forget. Had they won it all I think it would have been even sadder. But such is life and Truex Jr. goes on to a top-class ride with Joe Gibbs Racing in 2019. Here’s hoping the rest of the men and women who worked so tirelessly for FRR find new opportunities sooner rather than later.

THREE: Next up, The Great American Race

We’ll have to wait 89 days, but next up is the Daytona 500 and the start of the 2019 season. This will be the 61st running of the most prestigious stock car race on the planet and a race that I have been fortunate enough to attend in person on two occasions. Simply put, there really is nothing quite like the Daytona 500. There’s an energy and excitement that builds steadily right up to the green flag and the upgraded venue is a true gem in the NASCAR pantheon of venues.

Only eleven drivers have won the big race more than once with the King himself leading the way with seven wins. Cale Yarborough picked up four 500 victories while Bobby Allison, Dale Jarrett and Jeff Gordon each won three times. Dale Earnhardt Jr., Bill Elliott, Jimmie Johnson, Matt Kenseth, Sterling Marlin and Michael Waltrip won two apiece. Austin Dillon will be the defending race winner after a last lap power move on Aric Almirola all the way back in February. Who will be the next driver to write their name in the NASCAR history book? We’ll find out in about three months’ time.

As has been the case in the last couple seasons, 2018 will see a slew of big name drivers ride off into a post-NASCAR future. Kasey Kahne, as noted previously in this column, has retired after 15 years, 18 wins and 529 races. Elliott Sadler, also as mentioned last week, is another walking away after a combined 853 NASCAR races across all three series.

Matt Kenseth, although not officially 100% done, is likely not to race anymore and he’ll finish up with a championship (2003), 39 wins and 665 races. Jamie McMurray might race in the Daytona 500 but is otherwise done after 17 years, seven wins and 582 races. And then there’s AJ Allmendinger with his one race win and 371 races who is also stepping away from Cup racing. Good luck to all of them as they embark on the next phase of their lives and careers. They will be missed.

And finally, as I wrap up my 11th season of writing a weekly NASCAR column, I wanted to take a moment to sincerely thank the entire staff of this site and all the fine men and women who make this little corner of stock car racing an extremely special place to be. Thanks, particularly, to my weekly editors for putting up with my weird British expressions and idiosyncrasies and submitting on West Coast time. And special thanks to Tom Bowles, without whom none of this would happen. You’re OK, Tom, even when you add whole paragraphs to my columns in the edit. I kid, bossman, I kid.

Happy Thanksgiving, everyone. Enjoy the offseason and I’ll see you all for Speedweeks in February.

Mark Martin NEVER referenced anything regard “BREAD” when talking about Logano! God damn, is everybody lazy? They were spewing that on TV yesterday and in print. Come on!!!!!! Look up who’s quote that is. Hint, tis not Marky Mark!

“I am high on Joey Logano because I am absolutely, 100-percent positive, without a doubt that he can be one of the greatest that ever raced in NASCAR. I’m positive. There’s no doubt in mind.” That’s what Mark Martin said. It was Randy LaJoie who called him “Sliced Bread.” But, we don’t fact check in the internet age.

Exactly!! It was Randy! So easy to check and nobody does!

Logano’s bump and run on Truex at Martinsville was a power move, Dillon’s move in last year’s 500 was not a power move, it was a flat out wreck move by a no-talent winner of the genetic lottery.

Dillon doesn’t know what a power move is, he just punts. Another writer too lazy and eager to credit Mark Martin with another thing he didn’t do.
Mark Martin plus Dale Earnhardt Jr= no championships.