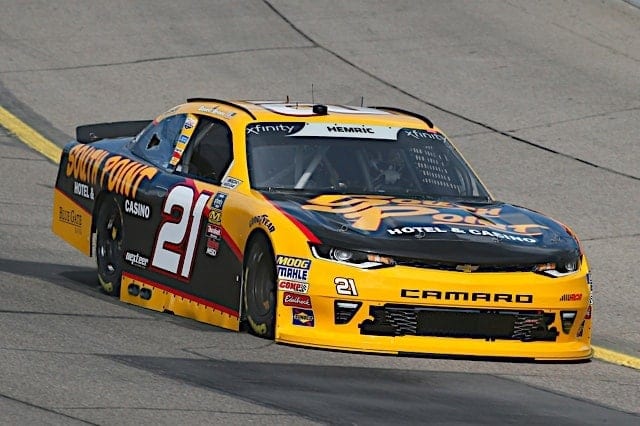 After finishing second in Saturday’s Kansas Lottery 300 at Kansas Speedway, Hemric’s No. 21 Chevrolet measured too low in the left front corner.  NASCAR has assessed an L1-level penalty against the team.  As a result, crew chief Danny Stockman has been fined $10,000 and suspended for the next XFINITY Series race.  Since the series is off this weekend, that means that Stockman will miss the race at Texas.  More importantly, Hemric was docked 10 driver points while Richard Childress was docked 10 owner points.

The result of those penalties is that Hemric has lost the points lead.  He will enter Texas one point behind JR Motorsports’ Elliott Sadler in second.  Instead of 23 points ahead of the cutoff, he will be 13 points up.  Richard Childress Racing has not indicated as to whether they will appeal the penalty.

Outside of Hemric’s penalty, the violations were minor.  In the Monster Energy NASCAR Cup Series, Kyle Larson‘s No. 42 Chevrolet was found to have one loose lug nut after Sunday’s Hollywood Casino 400.  As  a result, crew chief Chad Johnston was fined $10,000.  In the XFINITY Series, Matt Tifft‘s No. 2 Chevrolet was also found with one loose lug nut.  Crew chief Randall Burnett was fined $5,000.

Finally, NASCAR has indefinitely suspended James J. Bender, who most recently served as a tire technician on Ryan Newman‘s No. 31 Chevrolet for Richard Childress Racing.  Bender was found to have violated NASCAR’s Substance Abuse Policy.