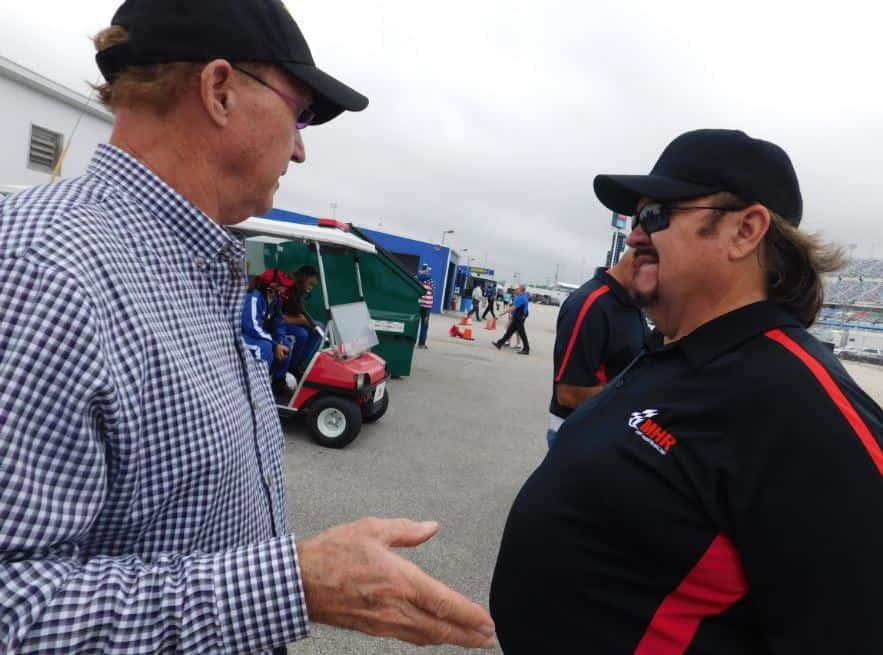 In late August, NASCAR announced it was reducing the NASCAR XFINITY Series field to 38 cars per race in 2019, reallocating the purse money previously awarded to the 39th- and 40th-place finishers to the rest of the field. But that has some teams on pins and needles.

Mike Harmon and Morgan Shepherd are two veteran NASCAR drivers who have combined to own XFINITY teams for more than 33 seasons despite working with the bare minimum. This new rule potentially affects the way their teams will be run in 2019 and beyond the most.

“We could not even have a team,” Harmon told Frontstretch of the field being reduced to 38 cars. “It might put us out of business, depending on what we can come up with between sponsorship and equipment with all the winnings. It very well could put us out of business because we depend on the purse to survive.”

Harmon, 60, has competed in 17 races this season in his No. 74 car. BJ McLeod, Cody Ware, Ray Black Jr and Stephen Leicht have all made at least one start in the car as well, totaling 23 out of 30 events. The No. 74 team has failed to qualify for seven races, six of which Harmon was behind the wheel. At Watkins Glen International, Leicht didn’t turn a quick enough lap in qualifying to make the race.

Despite the lack of speed in qualifying trim, the No. 74 team usually runs the whole race. The same can’t be said about Shepherd, who is on a streak of 87 consecutive DNFs (start-and-park) dating back to the fall Dover International Speedway race in 2013.

Harmon believes NASCAR should crack down on the start-and-park teams moving forward, as the sanctioning body said its goal is to “ensure that each race features the strongest field and best racing for our fans.”

“I think that some of those bona fide start-and-park cars is part of the reason that caused this,” Harmon said. “I told some of them, ‘What all y’all is doing is hurting the field.’ They don’t care. They’ll go out, run two or three laps and park it.

“I’ve done that when I couldn’t do any better. I’ve actually done it and had a pretty good car, and I tell you what, I pretty much had damn near tears in the eyes when I pulled off the racetrack. You get it there, do all the work, you make the race and get to take the green, then you can’t race because you can’t afford it. It really sucks.”

Since Shepherd began start-and-parking every week, the highest amount of laps he’s turned in a single race was 72 (Atlanta Motor Speedway, 2014). But the reduced field hurts the four-time Monster Energy NASCAR Cup Series winner, too.

“As a real independent team with no guys, no engineers, just a couple us, and when they cut the field back, we’re the ones it’s really going to affect,” Shepherd said. “We can’t buy the engines that it takes to run up front. It will make it a lot tougher for us.

“We’ve just got to see if we can get our cars good enough to qualify into the field because we’re probably 40 horsepower down from those top guys. There’s not a whole lot you can do about that unless you can get some money.”

If Harmon is surviving with the bare minimum, Shepherd is running with even less, having just one employee. The 77-year-old claims he has been broke four times this season alone, which is part of the reason why he hasn’t brought the No. 89 car to a handful of races (Daytona International Speedway, Watkins Glen, Road America, Las Vegas Motor Speedway and the Charlotte Motor Speedway ROVAL).

“I thought we were finished, but some of our friends — we don’t have big sponsors, but they will step up and help us,” Shepherd said. “Usually, when we’re gone [away from the track], it takes at least $10,000 to get us back in, and that’s happened four times this year — our friends have stepped up. I let them know what’s going on. They’ll ask me what I need, and most of the time, each one of them that I’ve asked, they put in $10,000.”

In addition to not making the trip to Daytona, Watkins Glen, Road America, Vegas and Charlotte, Shepherd has failed to qualify for seven races this season. When the No. 89 has made the field based on speed, Shepherd’s starts have ranged from 28th to 40th position.

For someone who has been racing in some sort of fashion since the late 1960s, the reduced fields could potentially shut down Shepherd’s team and end his career prematurely.

“It’s according to the people that we know and how much they can step up and help,” Shepherd said. “At the end of the season, I’m going to sit down and figure it out. I don’t have a Daytona car now because they are going to a composite car. I would say I’m between $50,000-75,000 that we will have to come up with. As soon as the season ends, I’m going to be working on all the new stuff. I’ll send letters out, call friends, and we’ll see what we can come up with.”

On the other hand, Harmon plans on giving the 2019 season a go. But for a team that has to move away from Dodge in 2019, that, too, will be cost effective.

Since NASCAR will evenly distribute the prize money throughout the field from what would have been the 39th- and 40th- place starters, that will obviously affect smaller teams — especially ones that run up to “80 percent” of its operation on said money.

Ultimately, Harmon is going to have to spend more money just to qualify inside the top 38. When the rule comes into play at Daytona in February, the top 33 speeds will be locked into the race, with the final five provisional positions based off points.

“You can even run a qualifying engine, as long as you know you can’t race it… That’s where the people making these decisions don’t realize for every action, there’s a reaction.”

Even though the plan is to run the full 2019 season, it’s possible Harmon’s team can’t make it to every stop on the schedule.

“There’s a good chance that we might have to step back for a little while and regroup,” Harmon said. “There’s a good possibility of that. I’m not into giving up, but I have to wear my business hat before I wear my racing hat.”

When the No. 74 car has raced this season, it’s been competitive for what Harmon considers the “third pack” of a given field. Between the five drivers who have run in at least one race, the team has an average finish of 29.9 and even has two lead lap finishes.

But as for NASCAR, Harmon is having a hard time accepting the rule change.

“I think the people that are making the decisions didn’t even know what a race car was when we’re at the racetrack,” Harmon said. “I don’t think they realize how it affects everything as a whole. Just like I told one of them, it’s like lining 40 people up, and you have a truck load of food, and you give all the people up front too much food before you get to the last three or four in that 40-people line — you have nothing to give them. That’s exactly the way it is.”

I seem to recall from when nascar posted the purse, that first and second were getting half. If nascar wants a stronger “field”, this makes no sense.

Tom F, NASCAR used to display the purse before the race, they also used to release the track and tv attendance too. Down the hole the sport went and they now release none of that.

lets them say they are increasing the purse to the teams without actually spending any more money.

I’m sorry, but if you’re a start and parker, you’re a hobbyist in my mind. If Nascar is your passion fine, but you’ve got to play by the rules.

To quote Eddie Gossage from Texas Motor Speedway “starting & parking is stealing” so if NASCAR
can get the practice stopped it would make the truck & xfinity series less of a joke and more
professional.

Maybe if the purses were better teams wouldn’t have to start and park. Of course then you have to have more people interested don’t you?
Maybe the ultimate answer will be that only the teams with cup affiliation will be allowed because they will be the only ones that can afford it.

Personally, I think Nascar should take away some of the payoff money from the top 5 finishers and distribute through the field. 1, It might dampen the desire for the high buget teams not to enter. 2,Therefore giving the opportunity for the underfunded teams to accrue the funds to race a litle better. 3,The start and park teams or driver could still try to improve their teams to stop parking and race the field. 40 car field is great. 38 is going to eliminate any new team from taking a chance to join the Xfinity Series from their local speedways when Xfinity Series visits close by. Nascar needs to stop killing the racing and start helping new up and coming wanta be’s.

Just remember that the existing teams don’t want new teams to come in. They don’t want more competition. All but the cup lite teams feel that it’s already hard enough.

Nascar likes to f*** the little teams over. Why penalize Xfinity because they get the most cars each week? Cup can barely get 40 anymore and ARCA only has about 25 cars each race.

Maybe the owners of cars in the Busch series or truck series can’t drive one of their own entry. It’s supposed to be a developmental series so how can a driver develop if the owner is driving?

30 car fields that race are plenty. Sorry but Shepard , Harmon and the like are a rolling chicane.