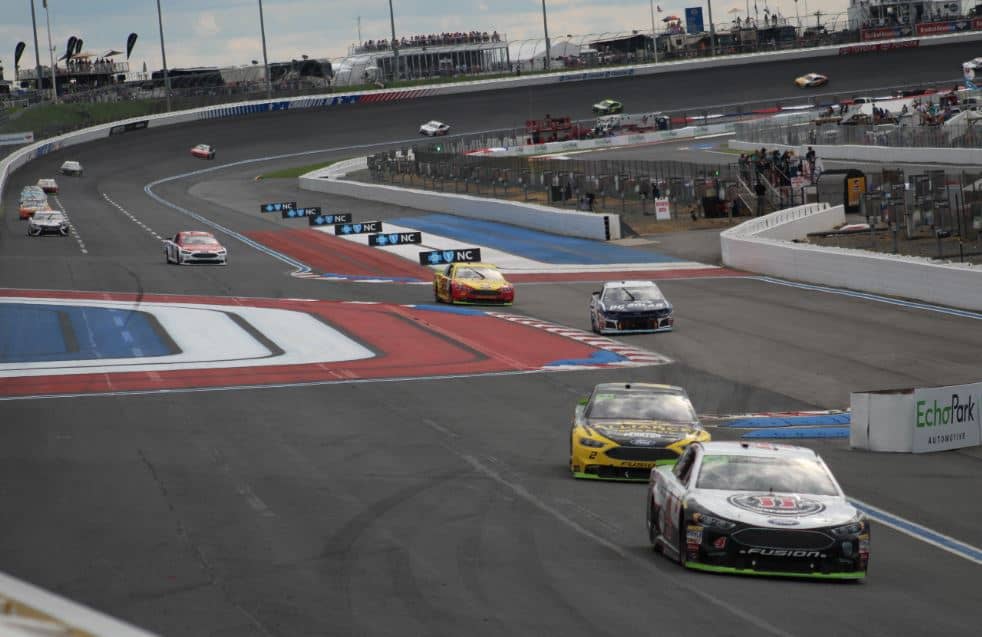 The Monster Energy NASCAR Cup Series has needed something new for a while. On Sunday, the series tried the Charlotte Motor Speedway ROVAL and it was that extra “something” that NASCAR needed. The overall race was one of the best of this season and maybe in the last decade, but the finish will forever live alongside some of the greatest in NASCAR history.

In the end, four drivers’ chances at winning the championship took a right turn while the other 12 will head to the next round of the playoffs. That round contains two monsters and a trip to the heartland with two of the favorites officially out.

Some drivers’ playoff hopes may be over but which competitors drove right off of our Power Rankings? Who is in and which drivers remain in the field of 10 as we inch closer to the season finale?

Martin Truex Jr. was very close to picking up his 20th career victory on Sunday. He led a total of five laps and a good chunk of the sixth, but when Jimmie Johnson spun on the final chicane and slid back around into Truex, it cost both drivers a victory and cost Johnson a spot in the round of 12.

Truex showed his displeasure following the race by spinning the No. 48 in the TUMS heartburn turn, but he had already punched his ticket to the next round with a good chunk of points after Richmond.

Damn wanted Martin to win that one so bad for all the women watching at home fighting this disease. Just wasn’t meant to be. Still an amazing day! Thank you @NASCAR & @MarcusSMI ?? pic.twitter.com/oEVHPXcWIN

Keselowski was pushed to the limit on Sunday with a backup car after an accident in practice put him in the rear of the field to start. Despite already being locked into the next round, lady luck threw everything at him including a tire rub during the race. He was able to make it back up front and he was leading when the second to final restart came.

Keselowski went into the TUMS heartburn turn along with the rest of the field during the second to last restart and lady luck finally threw a fastball right down the middle with a 3-2 count already on him, as he and a couple others nailed the wall. That heartburn was lessened, though, as Keselowski’s win in Las Vegas had already punched his ticket to the next round.

Racing with @KyleLarsonRacin is always fun. Today was a darn fine battle, would have been curious to see it play out if we both made it through on the restart. https://t.co/CbxVTwbqQn

Kyle Busch had already gotten lucky early in the race with that dreadful first turn, as he cut the course but was spared a penalty after NASCAR deemed that he didn’t gain any positions. During the same accident with Keselowski, Busch was another one of those drivers who didn’t make the turn and caught the wall as well, sending him to the garage and out of the race with a 32nd-place finish.

It’s always a good day when you hang another #win banner at the shop!

It’s a great day when you do better than you thought you’d do, especially when a driver is locked in. That’s one thing Kevin Harvick had in common with the previous three drivers heading to the ROVAL. He had just made it into the top 10 and did everything he needed to do during the race.

"Today actually went way better than I hoped it would. I think as you look at the way that we ran all day and where we ran all day, we were in the top-10 and up in the top-five and back and forth."@KevinHarvick finishes ninth.https://t.co/rVcRHlIKuS pic.twitter.com/SZsALXkFYl

After winning the most recent road course race of the season, Chase Elliott showed he’s become a pretty good road course driver after running consistently through the entire race. He fell just short of picking up another top-five finish but a top 10 is still some good momentum to take into the Round of 12.

Elliott was one of the first drivers to comment on the new rules package that was revealed on Tuesday, Oct. 2.

New challenges and opportunities are ahead for all of us drivers and teams, I look forward to embracing it personally. As long as the best still rise to the top, I support it. https://t.co/sNl7F8mtx9

Talk about heartburn! Almirola probably had a bunch of it on Sunday.

The stress that four drivers faced during the final laps of the race were made that much more stressful for Almirola who didn’t even know he made the next round until about 10 minutes after the checkered flag was dropped.

Wow. What a day. We did it! I couldn't be more proud of this team and very honored to be moving on to the next round. Let's go give 'em hell at Dover. ?#SmithfieldRacing pic.twitter.com/T40S4dXLHZ

Kurt Busch started from the pole and kept the lead for a chunk of the first stage until Kyle Larson made the pass early. Busch kept it consistent and off the unnecessary rumble strips to earn a strong fifth-place finish putting him into the Round of 12. Busch could be a sleeper to move into the Round of 8 after a strong first round.

Solid weekend. Pole, and 3 top 5’s during the stages due to @BillyScott_41 race strategy calls! On to the round of 12! Sweet! pic.twitter.com/WYKGnqz119

Sometimes it’s good to be lucky and, on Sunday, Blaney was lucky. He snuck through the Johnson/Truex debacle and stole the victory, his first of 2018. Blaney was one of those drivers like Almirola, Clint Bowyer and others who were risking not moving on, but firmly solidified his spot in the Round of 12 with the victory.

Blaney has two statistically strong tracks in the next round with Talladega and Kansas; his track record at Dover has been on the fence.

We're glad he could stop by and say ? to @Blaney again! https://t.co/xdeXaq78ur

No one can say Larson didn’t work his way into the next round. His day was going pretty well with a win in stage one, but from that point, his day went downhill much like his playoff chances at the time. Larson was involved in the accident late that brought out a red flag with just a handful of laps remaining, and the damage to the car appeared it had ended his title hops.

Instead of giving up, Larson bounced it off the wall twice and passed Jeffrey Earnhardt to take the position and that one point he needed to move into the next round.

That's an incredible race for one point that put Kyle Larson in the next round of the #NASCARPlayoffs. #TeamLarson pic.twitter.com/Q0bEdaNYv4

The same driver who said he didn’t deserve to be in the playoffs made it into the second round. Bowman had strong runs during the first round but couldn’t pull off strong finishes, which is something he needs to find during the second round. If Bowman can pull the momentum Hendrick had as a whole from the ROVAL, he could possibly produce a strong finish at Talladega and move into the Round of 8.

Pretty cool to advance to the next round of the playoffs. Bummed how that last restart panned out but we had a shot at it! Proud of my team, they brought a good car and we had awesome stops. On to Dover! #Bowman88 #RoundOf12 pic.twitter.com/qePIZnyTQY