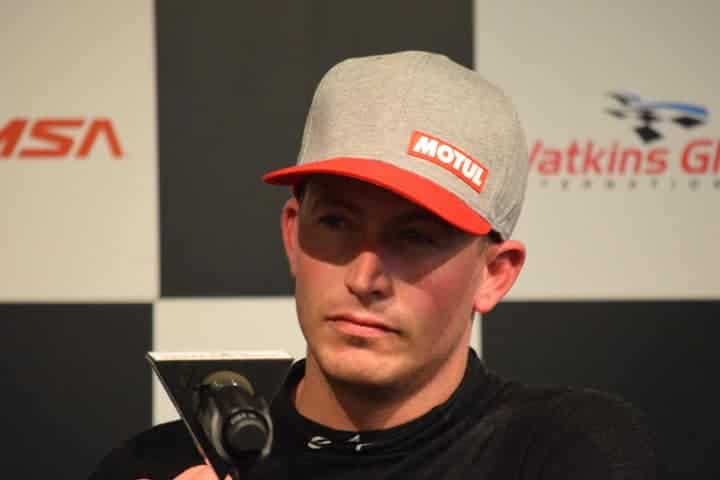 The speed chart dominance of CORE autosport’s Colin Braun continued on Saturday afternoon.  Braun turned in a lap at 133.490 mph to win the overall pole for Sunday’s Mobil 1 Sportscar Grand Prix at Canadian Tire Motorsports Park.  It is the second pole in a row for the racer from Ovalo, Tex.

“This car is just a blast to drive,”  Braun said after the session.  “I think [our speed comes from] the package of the great car. It’s an efficient car. Our setup, we’re learning every time we come to the race track. We’re a small team, a single car team, and we’re learning each time we come to the race track and we’re building on what we learned the previous weekend.”

Braun’s lap was the fastest pole time at Canadian Tire Motorsports Park since 2013 and likely the fastest LMP2 time ever on the 2.459-mile road course.   was more than two-tenths of a second clear of Acura Team Penske’s Dane Cameron in second.  JDC-Miller MotorSports’ Robert Alon surprised many with the third fastest time in the session.  Wayne Taylor Racing’s Renger van der Zande qualified fourth, fastest of the Cadillacs.  Mazda Team Joest’s Jonathan Bomarito will start fifth.

GT Le Mans saw a very close affair early on.  However, once Porsche GT Team’s Nick Tandy got in a groove, no one was catching him.  Tandy won the class pole with a lap of 120.413 mph, an all-time record for the class.

Tandy’s lap was three-tenths of a second faster than Ford Chip Ganassi Racing IMSA’s Ryan Briscoe, who got a late start on the session.  Corvette Racing’s Jan Magnussen will start third, followed by Laurens Vanthoor in the second Porsche.  Oliver Gavin will start fifth in the second Corvette.  All eight cars in class were separated by just over seven-tenths of a second.

3GT Racing’s Jack Hawksworth continued to show his speed on Saturday as he claimed his third GTD pole of the season.  Hawksworth’s lap of 117.125 mph was a full seven-sixteenths of a second faster than teammate Kyle Marcelli.

The Mobil 1 Sportscar Grand Prix is scheduled to start at 2:05 p.m. EDT on Sunday.  The race will air via tape delay on FOX Sports 1 starting at 4 p.m.