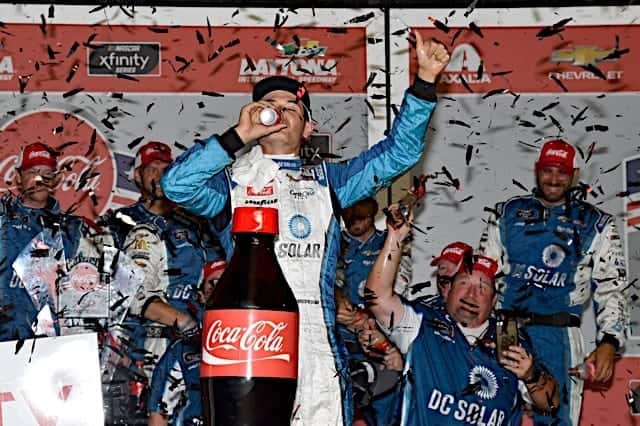 Justin Haley crossed the finish line looking at his first career XFINITY Series victory in just his second start. Rewind it back as the field approached the checkered flag, and you’ll see that Haley made a move below Kyle Larson and Elliott Sadler in what seemed like Haley stealing the victory…but that wasn’t the case once NASCAR made the call.

Before the call came down, Haley came to the line to celebrate his victory. In the long run, he was just practicing his donuts for future races, as NASCAR declared that the No. 24 went below the yellow line to make the pass deeming it illegal and handing the victory over to Larson, by mere inches over Sadler.

Christopher Bell, who spun on pit road early in the race, secured a third-place finish while Ryan Blaney and Kaz Grala rounded out the top five.

Ryan Preece started the race on the pole but his night would begin taking a downfall that would ultimately put him in the garage. Preece apparently hit some debris which put a hole in the radiator ending his night. Meanwhile, it was the Ryan Blaney show up front as the driver returned to where he dominated in February and was putting on another clinic.

On lap 81, the first “Big One” of the night happened when Matt Tifft hooked Austin Cindric and Cindric went around. As Cindric came back up the track, a combination of hitting Tyler Reddick and the tires gripping the track caused Cindric’s car to barrel roll. It flipped a total of two times, landing upright on the apron alongside Joey Gase.

From that point, chaos ensued. On lap 89, Brandon Hightower spun hitting the outside wall collecting Ray Black Jr. and Chad Finchum. The crash by Hightower would be his third DNF in four races.

The final accident of the night would involve a few of the nights favorites and contenders, including Ryan Reed and Cole Custer. The wreck all started when Jeff Green hooked Custer into the No. 90 of Josh Williams. Brandon Jones had nowhere to go as he hit the rear of the No. 00. Ryan Truex made contact with Ryan Reed at the bottom of the track sending Reed through the grass, almost gripping his car and flipping it.

Instead of resulting in a red flag the yellow flag ultimately ran laps down which set up the overtime finish. Larson had a strong run during the final two laps of the race which ultimately sent Chip Ganassi Racing to victory lane for the 17th time.

The NASCAR XFINITY Series has another Friday night race next week at the Kentucky Speedway for the ALSCO 300. The race is slated for July 13th and will be shown live on NBCSN at 8 p.m. ET. Kyle Busch is the defending race winner.

Why the “Controversial” nonsense in the header? Nothing in the race or this article was controversial. Haley made a mistake and that was it.

So supposedly rules are rules. However, Brad Keselowski questioned the ruling on twitter saying that Haley was barely past the 1 and 42 when he dipped below the line, so that shouldn’t be a penalty. The statement from NASCAR’s Wayne Auton said “It doesn’t matter if his nose is an inch out front or a foot out front, he’s still clearly inside the inside lane, and it’s a violation of the rule.” However, during the 2003 Aaron’s 499 at Talledega, Earnhardt Jr. passed Kenseth and Johnson to take the lead with 5 to go, and held the lead for the win. Look up the video, it is almost exactly what Haley did. NASCAR said it was a clean pass and let the win stand, and the statement then from Jim Hunter was, “this was a judgment call very obviously, there is no question that [Earnhardt] went below the yellow line. … He already had passed (Kenseth).” I guess NASCAR was just trying to prevent a riot at Talladega had they taken the win away from Jr. and there weren’t enough people in the stands last night to start a protest march, let alone a riot.

The problem with Brian’s toadies is that they can’t remember what they said in their previous sentence.

Discretionary rules. Like locking bumpers in the draft. Some are deemed guilty and some are not. I’ve never seen a sports organization run by a bigger bag of tools. Just got to shake your head and grin.