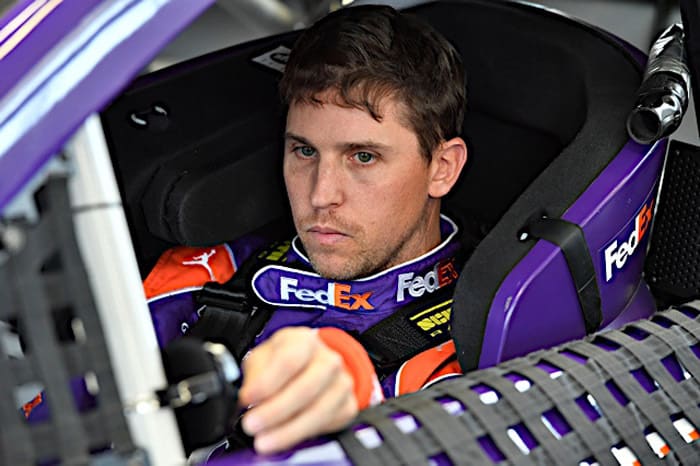 Last week on the Dale Jr. Download, Denny Hamlin said that there have been discussions behind the scenes with NASCAR about adding midweek races to the Monster Energy NASCAR Cup Series schedule. That brings about this weekʻs question: should NASCAR add some races in the middle of the week, or should racing be exclusive to weekends?

There needs to be midweek racing in NASCAR. Period.

Every major sport has events on weeknights except for NASCAR. Major League Baseball even has its All-Star Game in the middle of the week.

The only reason some aren’t willing to try some midweek races is because they assume weekend racing is the way we’ve always done things, and yet the truth is the opposite. The early days of NASCAR featured midweek races throughout the season. In a time when NASCAR was growing, the Firecracker 400 at Daytona International Speedway was run on July 4, regardless of what day of the week it fell on and the Southern 500 was held on the Labor Day Monday.

A move back to midweek racing would actually be a nice throwback to the early days of NASCAR.

Hamlin mentioned on Dale Earnhardt Jr.’s podcast that midweek races in the summer would work because that is when most of the major sports are in their offseasons. With no NFL and NBA, sports fans are looking for something to watch during the summer months. Throw a Cup race on a Thursday night during that time frame and it might catch some extra eyes that would not normally watch.

A midweek race would not draw a lot of people from far away to travel to the racetrack, but it could potentially catch more viewers. People like to travel and do activities on summer weekends, but on a weeknight, you’re more likely to catch them at home with nothing better to do than watch a race. Want proof of that? The Camping World Truck Series race at Eldora Speedway, always held on a Wednesday night, has been one of the series’ most successful nights since its inception.

Granted, the uniqueness of the Eldora dirt race helps to make it a must-watch event, but that brings me to my next point: midweek races would give NASCAR a chance to experiment with new tracks that normally wouldn’t be viable options.

A midweek race at any of the current tracks on the Cup schedule would hurt those tracks because they wouldn’t get the same attendance that they get now. So instead of moving existing races to the middle of the week, NASCAR would have the option to go to some of the short tracks around the country that don’t have the infrastructure to support a Sunday afternoon race. A track like South Boston Speedway only has about 10,000 seats — NASCAR could add a few thousand spots with temporary seating and still sell those races out, a rare term in today’s NASCAR.

A sold-out racetrack that holds 15,000 people gives the illusion of a bigger crowd than a half-empty track that holds 75,000. NASCAR’s money mainly comes from television and sponsors, while a small sliver comes from attendance. So by sacrificing a few attendance dollars, NASCAR could raise intrigue by adding different tracks and showing viewers grandstands filled to the brim.

It would also be another solid throwback to racing’s roots, like in 1964 when the Cup Series raced at Daytona on Saturday, then went to the three-eighths-of-a-mile Old Dominion Speedway four days later on a Wednesday. If this plan works, then NASCAR could shed a few mile-and-a-half races and shorten the extremely long season by a few weeks. That’s right, I’m claiming that adding races now could shorten the length of the schedule long-term.

NASCAR needs to get more creative with the schedule and do something that will generate excitement; midweek racing can achieve both of those. –Michael Massie

Weekday Racing Not for Me

Hamlin stated on the Dale Jr. Download that one of the TV network partners is onboard with midweek racing, while the other is a little apprehensive to make the drastic change. I think weekday races would be a step in the wrong direction for the sport and there are a few reasons why.

The first question I have is what time do you want to start these races? If we ran races during the week, I think it would be hard for NASCAR and the TV partners to find a happy medium.

For example, if we ran the Bristol Motor Speedway race in August during the week, that might work if it started at 7:30 p.m./EST. Bristol’s August race in 2017 took two hours and 46 minutes to complete. A 7:30 p.m./EST start time would mean that race would conclude at 10:16 p.m./EST, which is a reasonable time.

How about the campers? A lot of the people who attend Monster Energy NASCAR Cup Series races pay money to camp for the entire weekend at the track. It’s been an excuse as to why the NASCAR XFINITY and Camping World Truck Series races have so many companion events to give the campers a bigger bang for their buck.

It’s reasonable to expect fans to buy a camping spot for the entire weekend because most may only miss one, if not two days of work at the most. A weekday race would require a lot more dedication and would cost the racetracks significant money loss due to the campers that no longer would attend. These campers would rebel against the weekday races and just simply not show up.

One of the things that drives me crazy is when people in the sport compare NASCAR to other sports. It’s very different from other sports, and one of the major differences is that race fans travel several hours to a racetrack to watch their heroes perform. Most stick-and-ball sports teams are in major cities with a huge population. A lot of stadiums have easy access to mass transit. Most fans don’t travel more than an hour-and-a-half to go to a game.

Race fans are different. A weekday race would affect the attendance drastically. I understand that attendance is low, but the at-track experience is very important. It’s reasonable to assume NASCAR would lose about 70 percent of its attendance from a weeknight race. Add that to the campers that didn’t buy space at the track and it means that racetracks could look like ghost towns.

Also, the logistics have to be right to pull it off. For example, the Daytona July race was run on July 4 from 1959 to 1987. No matter what day of the week July 4 was on, that race was always run on July 4. What many people forget is there was almost always a weekend off the weekend before that race.

That was because between the travel schedule and the amount of time it takes to prepare the race cars properly, they had to have the time off. That hasn’t changed since the 1980s, and the schedule has gotten more and more full as the years have gone on.

For example, in 1986, the last race before Daytona’s July race was ran on June 15 at Michigan International Speedway. Not only did NASCAR not run the week after Michigan, but it was off the weekend after that as well until the race was run on the following Friday.

Between practice, qualifying and preliminary events, a week off prior to a weekday race is a necessity. With a 38-race schedule (including the two exhibition races), there’s just not a lot of room to play with anymore.

With all the moving parts and pieces to make it happen, the potential lack of attendance and the uncertainty in start times, weekday races would be a bad move for NASCAR. –Clayton Caldwell

While this possibility has been discussed for years, perhaps now is the time. BUT, it begs the question is the future of stock car racing to be a television sport, or a live audience sport? Of all the “major” sports Nascar is the only one which cant survive (without TV) with a local audience alone. So which way do theyy want to go?

Here’s a compromise: Next year hold the Firecracker 400 on the 4th, take the following weekend and week off and use this as the “Summer break” in the schedule. See if doing this impacts the at-race attendance (I’m betting it won’t). The week of July 4th is traditional vacation time for people and prime time network TV is into repeats. Later, look at holding the All-Star Race on the Friday prior to the World 600, which would motivate fans to come to Charlotte earlier and stick around through Memorial Day weekend. To make room for a Friday All-Star Race, run the Truck race on Charlotte’s dirt track on the Thursday night before the All-Star race.

If Brian won’t run the Firecracker during the week on July 4th, starting at 10 AM like in 1984, he’s not going to do it for any other events. I hope July 7th is a beautiful day until about six pm and then it rains for six hours.

Amen Don, the by-God Firecracker 400 should be run on July 4th every year. As Bill France and God intended!