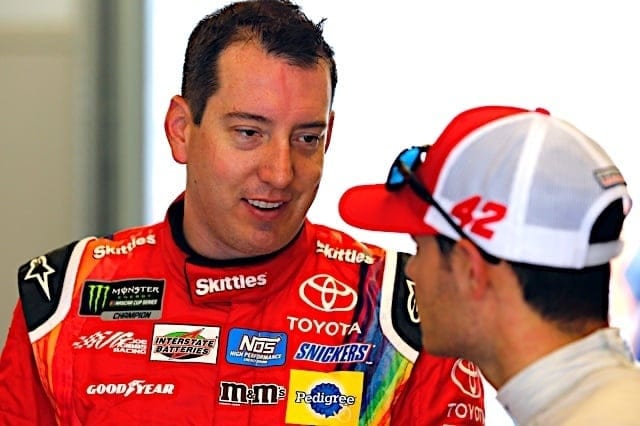 On a Sunday afternoon, when storms were brewing all around Chicagoland Speedway, the biggest storm of all was brewing on the race track.  Kyle Larson was charging through the field, running his customary high line inches away from the wall.  Larson was trying to catch Kyle Busch, who held a sizeable lead but appeared a little more vulnerable to the No. 42 with every passing lap.

Fans have seen have this show before.  The “Kyle and Kyle show” unofficially debuted at Bristol Motor Speedway in March 2013.  Battling for a win in the XFINITY Series, Larson tried to swoop past Busch off the final turn.  Larson’s Chevrolet and Busch’s Toyota clanged together as they took the checkered flag.  Busch held on to win, but the final margin of victory was only 0.023 seconds.

Five years later, Busch and Larson still have a way of finding each other with race wins on the line.  A few months ago, at Bristol again, Busch caught Larson with six laps to go and put the bumper to the No. 42.  Larson walked away frustrated, Busch walked away with the trophy, and the fans who braved a weekend of crummy weather in Thunder Valley walked away having seen the best race of the season.

Once again, it all appeared to be over for Larson with a few laps to go.  The No. 42 scraped the wall and dropped over a second behind the No. 18.  Busch’s victory seemed secure.  But after Busch got hung up in lapped traffic and nearly crashed, Larson was back on his bumper as they took the white flag.

In Turns 1 and 2, Larson attempted an ambitious slide job that ended with the No. 42 in the lead, but only after squeezing Busch into the outside wall in the process.  Suffice it to say that everyone knew what would happen if Busch got back to Larson’s rear bumper.  He did in Turn 3, and a little nudge was all it took to send the No. 42 sliding sideways.  Larson held on well enough to finish second, and Busch collected his fifth win of 2018.

The finish to Sunday’s race is Busch and Larson at their best.  Not only are they highly-skilled racers with excellent car control, but they shared an attitude about racing that makes their battles so fun to watch.  Busch and Larson both have a high-risk, high-reward driving style.  They accept that their best path to putting a car in Victory Lane each week will occasionally result in putting a car in the fence.  It is this worldview that allows Busch and Larson to bump each other on the track and bump fists afterward.

“Larson tried to pull a slider and didn’t quite complete it,” Busch said after the race.  “(He) slid up into me, used me, and then I kind of used him as a little bit of a brake getting into (turn) three.

“When you start beating and banging doors on one another, that’s what it turns the race into, and it’s fair game after that,” Busch added.  “If he would have raced fair game off of (turn) two and not banged doors, then we would have been just fine into turn three.”

Larson, for his part, seemed to expect that retaliation from Busch was coming after the messy slide job.

“I tried to get to his door,” Larson said, “and I opened the door for him to retaliate in (turn) three.  So, I thought it was free game.  You know, I ran into him first.  He got me after that, maybe a little bit worse than I got him.  But you know, that’s alright, I love racing Kyle.  I know all you fans are probably mad at him, but we put on a hell of a show for you guys.

“That’s gotta be one of the best NASCAR finishes of all time,” Larson added.  “I’m on the short end of the stick again, but it was fun.”

Larson’s statement hints at a couple variables that could change the Kyle and Kyle show going forward.  The first is the response of the fans.  Larson was more disappointed by the outcome of the finish than any of Busch’s actions, but the fans were not so charitable.  When Busch emerged from his No. 18 car, the crowd greeted him with a shower of boos.  His reaction?

“If it wasn’t for lapped traffic, it wouldn’t have even been a race,” Busch said.  “So I don’t know what you all are whining about, but if you don’t like that kind of racing, don’t even watch.”

Once the rain began to fall and Busch was under cover in Chicagoland’s makeshift Victory Lane, he addressed his detractors again.

“Of course, (thanks to) the fans, my fans,” Busch said. “They’re pretty passionate, pretty powerful for what we have going on here with Rowdy Nation.  The rest of ‘em, I don’t know what they’re booing about.  That was a hell of a race, so you’ve got problems if you don’t like that.”

This is far from the first time that Busch has poked back at the fans, but he seems to have a different attitude about being NASCAR’s villain than he once did.  When Busch had his infamous run-in with Dale Earnhardt Jr. at Richmond Raceway 10 years ago, he referred to Junior Nation as “crazy” and seemed shaken by the backlash he received.

These days, Busch does not shy away from donning the black hat.  In fact, he wore it with pride on Sunday.  With the possible exception of Brad Keselowski, nobody invokes the “I don’t care what people think of me” attitude better than Kyle Busch does.  It is the same attitude that drove fans to either love or hate Dale Earnhardt, and NASCAR is better off with Busch and his polarizing nature than without him.

As for Larson, NASCAR needs his attitude, too.  Larson came off much better with the fans because he acknowledged that the finish was a great show, despite the fact that he lost (whether Busch would have done the same if the roles had been reversed is doubtful).  By admitting that Busch owed him retaliation, Larson separated his own disappointment from the norms of the driver code.

The question is, how long will Larson maintain that separation?  Through his entire Cup Series career, Larson has finished first five times and second 18 times.  With two tough losses to Busch this year, how much further will Larson push the envelope while racing the No. 18 in the future?  Remember that Larson, despite his acceptance of the events on the last lap, felt that Busch got him “a little bit worse” than he got Busch.  Will Larson race Busch even more fiercely the next time they meet on track?

Busch’s reputation and Larson’s drive to win set up the Kyle and Kyle show for more great episodes.  While Busch will continue to draw more heat from the fans than Larson, the two drivers are more alike than fans may realize.  They are excellent athletes who push each other to their limits and take big risks in their pursuit of victory.  They are the racers who make NASCAR a richer, more thrilling experience.