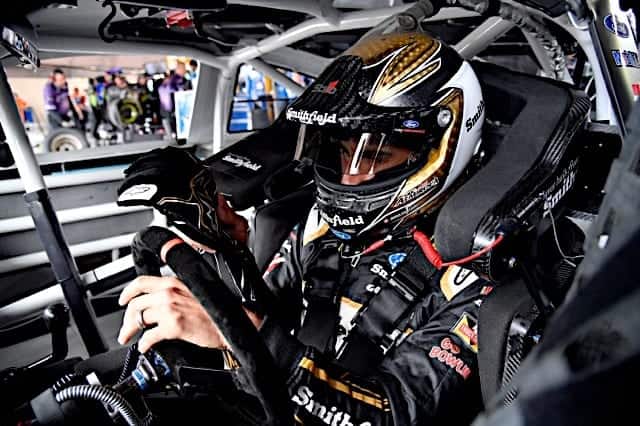 Lost in the excitement of the race finish in which Kyle Busch and Kyle Larson used every inch of the track – and each other – in an epic last-lap battle is Aric Almirola’s stellar run. For the first time since Daytona, the driver of the No. 10 Ford found the lead and kept it. In fact, he led for a race-high 70 laps, surpassing the number of circuits he’s led in his last five race seasons combined.

But a pair of loose wheels derailed what might have been for Almirola. The first came when he was leading late in stage two, forcing him down pit road under green in a move that turned out to be warranted when it was found his left rear had, in fact, been loose. Despite going a lap down, he received the free pass at the conclusion of the stage and rejoined the lead lap.

“Our car was super fast, especially out in clean air. It was incredibly fast. We just have to execute,” Almirola said. “We have to put a whole race together. That is the difference between being good and being great. We are capable of winning. We showed it today. We have speed, we are bringing incredible race cars to the race track and we just have to put a whole day together. We have to be flawless on pit road and I have to do my part too.

Perhaps what’s even more important to note is that Almirola’s 70 laps out in front of the field Sunday surpassed the total number of circuits Danica Patrick, the former driver of the No. 10, led throughout her entire 191-race career. If Almirola and the No. 10 team can find a way to put a fast car on the track and not shoot themselves in the foot, they might finally manage to snag that elusive checkered flag. – Beth Lunkenheimer

In what was one of the warmest days at the racetrack in recent memory, Kyle Larson came from the back of the pack to win his second race in three starts this season.

Larson drove the No. 42 Chevrolet up to sixth prior to the first stage ending. In stage two, he went on to pace the field, earning a playoff point toward the owner’s championship. In the final 110-lap sprint to the finish, it was total domination.

Larson crossed the finish line more than eight seconds ahead of Kevin Harvick, who was his nearest foe on the track. Leading a race-high 80 laps upped his total to 283 for the season, which is second in the series only to Justin Allgaier‘s 458. Remember, Larson has just three starts in XFINITY this season, though leading the most laps in each of those races.

Cole Custer finished third and took over the championship lead with his fifth consecutive top-five finish. Daniel Hemric notched his eighth top five of the year, moving ahead of Elliott Sadler for second in points.

The series heads to Daytona next weekend, where Tyler Reddick was victorious in February. Oh yeah, that was the closest finish in NASCAR history with a .004 margin of victory of his JR Motorsports teammate Sadler. – Dustin Albino

Much was said Friday night about Brett Moffitt’s precarious sponsorship situation, especially given that earlier in the week, the No. 16 team wasn’t even sure they would be racing this weekend. But Fr8Auctions stepped up to back Moffitt’s run at Chicagoland Speedway and keep his championship hopes alive.

By the time the checkered flag flew, the company found itself in Victory Lane for Moffitt’s third win of the 2018 season. After stalking John Hunter Nemechek in the closing laps, Moffitt took advantage of an empty fuel tank for the driver of the No. 8 Chevrolet and cruised to a more than five-second victory over Ben Rhodes.

Yet, despite having three wins Moffitt still has a couple of unsponsored races.

NASCAR has already said it wouldn’t grant a waiver if Moffitt misses a race due to a lack of sponsorship. What a tragedy it would be if one of the strongest drivers this season can’t run for the championship simply because of funding. – Beth Lunkenheimer

Sports Cars: Just What Happened with Montaplast by Land-Motorsport Sunday?

2018 has been an interesting year for the German race team competing in IMSA in association with Starworks Motorsport.

Sunday’s Sahlen’s Six Hours at the Glen is just another example of how the team seems to be snake bit.  Sheldon van der Linde and Christopher Mies put the team in position to win the GT Daytona class.  However, the team performed work on the car in a closed pit after Andy Lally blew a tire to bring out the fourth and final course caution.

When everyone else pitted under yellow, van der Linde ended up with the class lead.  Then, the penalty was announced.  Van der Linde had to do a stop and 60-second hold for the disallowed service.  The team clearly did not agree with the penalty and spent significant time pleading its case to IMSA officials privately.  While the discussion was ongoing, van der Linde continued to lead the class.

The team was originally going to run full-time but has since cut its schedule to only the four endurance events.  On the bright side, the organization’s next IMSA race is the Motul Petit Le Mans at Road Atlanta, where it is the defending GT Daytona champion. – Phil Allaway

Formula One: After Austria, the Silver Arrows are Not a Bullet Proof Team

Just when it looked like Mercedes and Lewis Hamilton would make this weekend’s Formula 1 Grand Prix of Austria look like a boring event, along came some sort of miracle for Ferrari and Sebastian Vettel.

Trailing Hamilton by over 22 seconds, Vettel was working his way up the field when Valtteri Bottas suffered what was rare for Mercedes-Benz: a hydraulic failure. The virtual safety car came out, when enforced, would slow the cars down to 40 percent. But as Hamilton ignored the option of returning to the pit lane to pick up new rubber, his mistake was that Red Bull and Ferrari came into the pits instead.

Hamilton finally did pit, but the wasted time dropped him to fourth, but at the end, Hamilton was well short of his goal. Only a few laps before the race end, he retired from the race with a fuel pressure problem.

But while this all was going on, the two Ferraris of Vettel and Kimi Raikkonen, were moving up front. However, it was Max Verstappen, who had taken the lead from Hamilton when the Briton pitted. Even with slightly problematic worn tires, he conserved just enough to beat Raikkonen with Vettel finishing in third. For the German, being the last on the podium was not bad after all, because now Vettel leads in the world championship by only a single point over Hamilton.

The most impressive achievement at the Red Bull Ring also was the placing of both American Haas drivers Romain Grosjean and Kevin Magnussen. Grosjean, who did not have a single point earned this season, finally took fourth with his Danish teammate right behind him in fifth. It proved that the arduous work is still going on even at the teams’ 50th grand prix race. The double points now jump Haas into fifth place ahead of McLaren and some 20 points behind Renault, who had a bad afternoon and are fourth.

Mercedes would rather forget this race, and Hamilton knows he does not want to have a bad time at the next round, in Great Britain, his home, or Vettel just might be the driver who has the shoe on the right foot, like at the beginning of the season. – Mark Gero

It appears that there are racing reporters who deliberately taint their articles with untruths… like this dolt. Comparing how Amirola is doing this year with Danica is pure horse pucky. If the writer does not have the brains or racing savvy to be honest and know that the cars SHR is fielding this year are miles ahead of the stuff they had last year, then its pure bias and bullcrap. ALL the SHR cars are much faster and better handling this year and its obvious to anyone… except a dolt like the writer of this article… comparing what Danica had to work with last year to what Amirola has this year is apples and oranges. Be honest and stop denigrating Danica… otherwise I will think you are nothing but an ahole.

Danica had the same equipment as the other two. Her results aren’t close to what they did in the other cars.

…Meanwhile back on planet earth…the truth you posted is well….THE TRUTH!!!!!!!!!

There is also the unwillingness to treat one of the old boys club the same way they treated Danica.

If Danica was in the 10 this year , I bet she could run 25th each and every week.