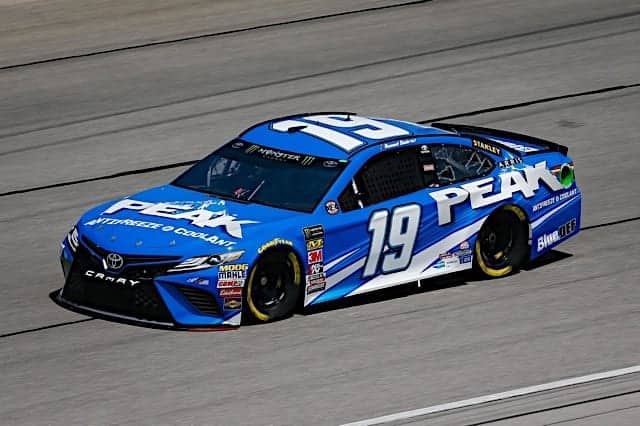 Daniel Suarez entered 2018 with high expectations coming off a solid rookie season in the Monster Energy NASCAR Cup Series. But 16 races into the season, the No. 19 team sits 19th in points, 73 markers off the cut-line.

Suarez, 26, has four top-10 finishes this season, leading just six laps. His best effort was a third at Dover International Speedway (May 6), where he had a pair of top 10s at in his rookie campaign.

In the handful of races post-Dover, Suarez has an average finish of 22.4, with a pair of 15th-place finishes at Charlotte Motor Speedway and Sonoma Raceway. In the other three races, he has finished 24th or worse, though gaining one spot in the championship standings.

Despite the lack of results compared to his Joe Gibbs Racing teammates Kyle Busch, Denny Hamlin and Erik Jones, the 2016 XFINITY Series championship is confident heading into the final 10 races of the regular season.

“We’re going to make it,” Suarez said on Saturday at Chicagoland Speedway. “Somehow, we are going to work very hard like we’ve been doing. It’s a real shame that we haven’t showed the results we deserve because the speed has been there. We have shown the ability to finish in the top-10 every race.

“I don’t know what I am doing wrong. Maybe some of my stuff, it needs a little bit of luck but I don’t believe in luck 100 percent. We’re going to be fine. Maybe in a month, we’re going to be in a different position.”

Suarez has reason to be confident. Over the final 10 races of the regular season last year, the No. 19 team had five top-10 finishes, including a stage win at Watkins Glen International. There was even a four-race stretch where the team had a worst finish of seventh. It was a pair of DNFs at Michigan International Speedway and Darlington Raceway that hindered his chance at the playoffs.

16 races into the season, Suarez has an average finish of 18.9., which is just off the 18.8 average he has at the mid-race point. But he believes his Scott Graves led team can make the playoffs.

“By points is very doable,” he said. “I think if we have the speed to go out there and win a race, we will take that chance. But if [we] don’t and have to finish top-five or top-10, we’re going to be consistent and play that way. Winning the stage points and stuff like that. I mean 70 points in 10 races is not a lot. It’s doable but you have to race smart and a lot of people freak out a little bit. We will be fine.”

This week the series is at Chicago where Suarez had a 12th-place finish last season. Next week, the series heads to Daytona, where he led 11 laps at last July and was in contention for the race win late in the going.

He better be. Unless his backers have ton’s of dough to give to the Jesus Joe Ministries and Toyota. In my humble opinion, he is toast. Buh bye! Next year.